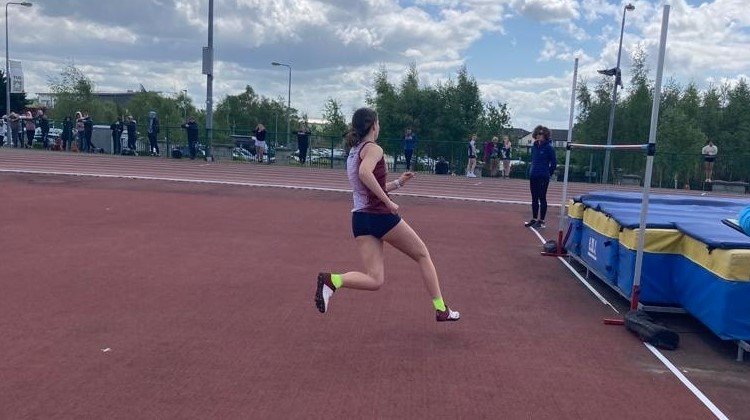 The day was certainly not conducive to personal bests as the wind whipped around the exposed track in Athlone, but there were fine performances from Craughwell AC Athletes representing their schools and many have sailed through to the prestigious All-Ireland finals in Tullamore in two weeks.

At Senior level, Presentation student Evan Hallinan crushed it in the High Jump with a great leap of 1.90, over 30cm clear of second place. He came very close to clearing 1.96 despite the windy conditions. Multi-talented Evan also won the Triple Jump with a 12.33 leap.

Oisín Davis of the Pres is coming into fairly good shape despite the leaving cert and won the 1500m comfortably. Oisin started out looking for a personal best but the strong breeze changed his mind after a lap or so so and he cruised home in 4.16.47.

Luke Forde came into the day with a 57s personal best in the 400m but defied the wind to smash that with a fine 55.86 new personal pest. This is only Luke’s second ever outing in the event and he has a lot of potential.

Liam O’Connell of Clarin college is new to middle distance having graduated from Fit4Youth a few months ago, but he made a big leap forward on Thursday with a fine 2.07.70 800m for 4th. This is a huge personal best despite the blustery conditions. Liam led the race from the start but was just passed on the home straight to narrowly miss one of the 3 All-Ireland qualifier slots.

Evan Quinn won the Triple Jump with 10.97 and was 2nd in the long jump with a fine 5.46 while Sean Liston was 3rd in a hotly contested inter boys High Jump with a leap of 1.60.

In the High-Jump, Eva Kelleher of Galway ETC continued to show her class with a superb win leaping 1.45. Leonore Church of PCA was 2nd on countback clearing the same height.

Juniors: Kilduff does the double

In the Junior Girls, Lauren Kilduff of Gort CS won the 200m in a strong 27.33. Emma O’Donovan came 2nd in the High Jump with 1.40m. Lauren went on to win the Long Jump with very impressive 4.95m leap.

Declan O’Connell is a marked man and his international teammate Eamon Coyle of Roscommon tracked him all the way in the 1500m as Declan did the work into the wind. Eamon was planning on a kick from 200m but Declan was having none of it and kicked early from 400m to seal the win in 4:34.69.

Darragh Kelly of Clarin College was an impressive winner of the junior High Jump with a 1.55 leap.

Conor Penney won the high Jump with a good 1.66 clearance – well off his personal best but such was the day. Conor then came 3rd in a very high quality sprint Hurdles, losing out on 2nd by 1 hundredth of a second. The 800m was an excellent race with Stephen Ruane coming 2nd with a great 2.16 clocking.

In the 100m, Keevagh Barry came 3rd closely followed by Lauren Morgan. Lauren Morgan was a narrow 2nd in the Long Jump with a superb leap of 4.95, I think this is a PB for her?