Athletes from the club put in some huge performances at the weekend in the Connacht Primary Schools Cross Country Championships which were held on a narrow course in Summerhill College Sligo. On a windy day with a sprinkling of rain, the narrow course around the boundary of a football field proved to be a very tough course due to the tightness of the running route and the fields of 120 or so athletes. The club’s athletes coped well with the blustery conditions and featured strongly on 5 of the medal winning teams across the 4 races.

The senior races proved the most fruitful for the club on this occasion with 4 of the 5 team medals coming from there races. In the Senior Girls 1000m, Craughwell NS’s Mia Waters put in an incredibly brave performance taking it out hard from the gun to help her team get a fast start and led the race for the first 400m. The strategy paid off richly for the team as they got out quick which was a huge advantage on such a narrow course. Mia herself suffered in the latter half of the race and slipped back to 18th place but can be very proud of leading her team to the bronze medals in this most difficult of competitions. The Miskella sisters Emily and Ailbhe both had towering runs to finish next for Craughwell in 28th and 31st place. It was a particularly fine run for Ailbhe who has been struggling with a heel related injury all season and bravely went through the pain barrier to help her team. Rebekah Flynn had a storming finish to overtake possibly 15 athletes in the last 100m and take 49th place while Aoife Kelly and Penny Wells both finished strongly also in 56th and 57th for a fine team performance which yielded a score of 126 points and team bronze. Ellie Cronin’s Lisheenkyle team went one better with a silver medal performance from the team and a fantastic 23rd place for Ellie. 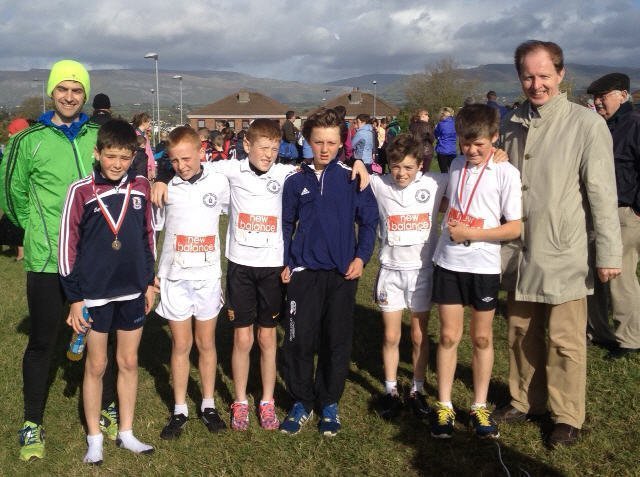 In the senior boys 1000m, Kyle Moorhead was first home from the club in 8th place, in the process leading his Craughwell NS team to the bronze medals with a fine score of 89 points. Kyle’s 8th place finish is the highest ever from the school – a considerable achievement given the long line of good runners to emerge from the school. Kyle was followed home by some fantastic finishing with Shaun Gilligan 22nd, Gavin Kelly 29th, Adam Stewart 30th, Jack Farrell 62nd and Lewis Ryan 86th. Clarinbridge had a huge performance in this race also to go one better and take the team silver with a low score of 68 points, just 3 points off gold. David Lee was first home in 12th place with brother Gavin 16th and Liam Leen hot on his heels in 17th. Eoin Lyons completed a fine team score with 23rd place and was followed by Callum Browne in 64th and Conor Hoade in 65th place. Sean Cotter (Gaelscoil de hIde) and Sean Cannon (Oranmore Boys) also ran strongly in 18th and 19th place. 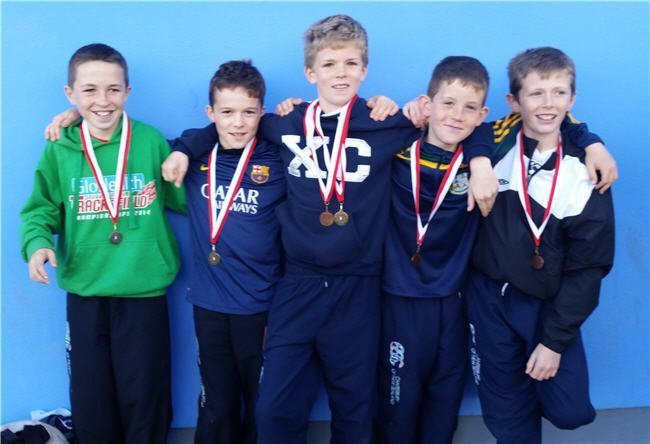 Earlier the day kicked off with the Junior Girls 800m where Clarinbridge’s Saoirse Moore ran a huge race to take individual 3rd place in the difficult conditions and was followed by Killeeneen’s Caoimhe Connolly in 7th place. Ava Carr and Katie Scully continued a strong Clarinbridge performance to take 22nd and 28th place. With their 4th scorer Ella Lydon placing 102nd, the team waited anxiously for the team results at the end and to their delight they won the bronze team medals with a score of 155, just 4 places from taking the silver medals. Jade Moorhead led a strong performance from a young Craughwell NS team with a 41st place finish, followed by Rebecca Lynch 49th, Chloe Hallinan 56th, Clodagh O’Meara 73rd, Sarah Byrne 98th and Leah Farrelly 104th. The team scored 219 points to place 7th out of the 14 teams that completed the race.

The Junior Boys were next into action for their 800m. Darragh McCartin was the first home from the club in 32nd place leading his Craughwell NS team to 5th place with 169 points and followed home by Evan Hallinan 33rd, Luke Flynn 47th. Evan Moran 57th, Eoin Byrne 58th and Robert Urquhart 81st. Clarinbridge’s Cian Lavan had a good run to take 42nd place as did Killeeneen’s Fabian Fleetwood in 56th place.

So all in all, while some teams will be disappointed not to make it into the medals, it was a great day for the club. Clarinbridge NS are starting to make a name for themselves in Connacht with 2 sets of team medals this year to add to the set won last year. While Craughwell NS continued its fine tradition at this level to add 2 more sets of team medals to its haul from the last 12 years which now stretches to 7 team gold, 1 team silver and 7 team bronze.