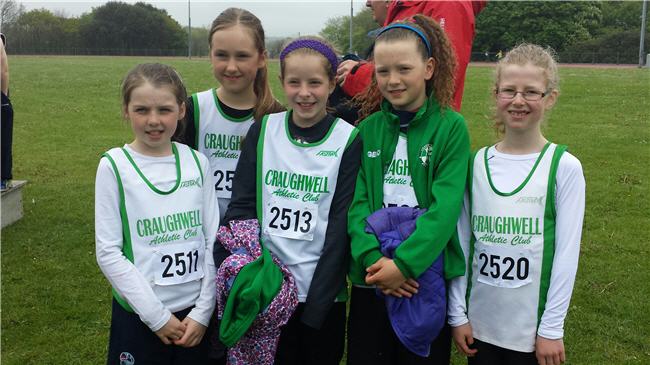 With 50 entered competitors, Craughwell A.C.’s u11s group were the county’s largest club group in any age-group last Saturday. Of those 50, more than half were from schools outside Craughwell N.S. and it is the parents of many of some of these new children who have directly contributed to our under 11s sweeping the (medal) board in Javelin and Long Jump through their input at thursday training. We wish to thank in particular John McDonagh, Noel Keane and Kevin Quirke in this regard. 4 of our throwers threw 16m or more, while 8 boys plus 3 girls threw 10m or more. While it remains to be seen if we can medal in Tullamore on June 21st, these men have laid a wonderful foundation and learning environment for throwing events that most clubs could only dream of. And on Saturday, the fruits of their year-long sessions were evident for all to see (see below). Suzanne Egan and Aisling Connolly are two additional coaches whose invaluable volunteerism was evident, as our long jumpers claimed 5 of the 6 paired medals, with Mark Egan leaping more than 3m yet again and Caoimhe Connolly heading home with a Gold (Relay) and Silver (Long Jump). There were the usual 3-medal star turns for Emily Miskella (2 Golds and 1 silver), Rebekah Flynn (1 Gold and 2 silvers) and Liam Mulveen (2 silvers, 1 Bronze) – but also a few athletes with near misses in the past who have started to shine, notably Rebecca Lynch (3 Golds), Alex Slamas (Gold, Silver and 6th), Lukas Schukat (Gold, Silver and 0.02 from a bronze!), Robert Urquhart (Gold and Silver) and Niall Cummins (Silver and Bronze). Kieran O’Connor (Gold and Silver) will be sorely missed in Sligo, but showed real class in both Long Jump (3.44) and Relay. Adam Stewart deserved his medal at 600m and was 5th in Javelin. Conor Hoade underlined his credentials with a phenomenal 2nd leg in the relay, the 3rd fastest 60m of the day and 5th in the 600m.

11 relay teams (7 boys and 4 girls) got things started – and for the 3rd successive year, there were no dropped batons or disqualifications! That in itself is an achievement every child can be proud of as the relay shows important qualities like team-work, co-ordination, co-operation, organisation etc. Our boys team finished last season at the All-Irelands with a club record of 1:02. Here, they knocked a second off that to finish 2nd with a blistering performance only eclipsed by Ballinasloe, the country’s best relay team at this age. The manner in which Liam Mulveen fought off the strong challenge of Athenry’s sprint medallist on the home straight was so heartening and impressive. With Liam, Robert Urquhart, Conor Hoade, Kieran O’Connor and Lukas Schukat, this relay squad can go and break more club records in the years to come. 6 other Boys teams were entered – and we came 2nd, 4th, 5th and 7th on the day, with Mattie Kennedy, Nigel Kelly, Lukas Schukat and Liam McDonagh (sub Niall Cummins) finishing 4th in 1:05.38.

Our girls squad went one better by winning the gold in theirs. Emily Miskella’s margin of victory in heat 2 was huge – the only question was whether their time eclipsed that of Ballinasloe – last year’s Connacht champions. At 1:05.41, it did (by 0.4 secs), with Alex Slamas, Rebecca Lynch and Rebekah Flynn providing an unassailable lead for Emily. Caoimhe Connolly, the sub, was part of the Craughwell team that were edged out by a mere 0.1 of a second for third. The other valiant members were Molly Sullivan and new girls Hannah Whelan, Hannah Hynes and Oliwia Koman. We are blessed to have athletes of this calibre running with us this year, pushing everyone to reach better standards.

Both Long Jump and Javelin saw us claim 5 of the 6 pairs of medals on offer. There were clean sweeps in Girls Long Jump and Boys Javelin.

The morning began with the first outdoor long jumps for our athletes where they had to jump from the board. In wet, breezy conditions, most athletes recorded at least two leaps close to personal bests. Lukas Schukat’s 3.58 was particularly impressive, with Kieran O’Connor just behind, and combining for the gold medal. Liam Mulveen and Niall Cummins secured silver. While the aforementioned three boys are All-Ireland regulars, this was a great break through for Niall. Liam McDonagh jumped 3.27 to make him our 5th best boys jumper of the day. Michael Trehy also finished over 3m, while Mark Egan (3.02m), Odhran Keane, Cian Daly, Eoin Byrne, Cian Irwin and Darragh McCartin formed the 6th, 7th and 8th best pairs. Mark will be disappointed not to emulate the hugely impressive 3.28m he did in Dangan earlier, but is showing growing potential in this and other events.

At the girls pit, Rebecca Lynch – 4th for the past two years – delivered the best two jumps (3.28m, 3.24m and a break) to take gold alongside regular medallist, Emily Miskella (3.23m). Rebekah Flynn was narrowly edged out on 3.17m, but it was always going to be tight between these three. Caoimhe Connolly combined with Rebekah to take silver. At the time of writing, Caoimhe has jumped 3.10, so her improvement imdicates both pairs could medal at Connachts. In 3rd, Molly Sullivan – 4th with Rebecca in 2012 – got a deserved bronze with Oliwia Koman, who has done 3m+ in training and recovered from an early break to secure an equally deserved place in Sligo.

Javelin saw another tight contest in difficult conditions betwen the three All-Ireland finallists from last year – Oisin Keane, Robert Urquhart and Liam McDonagh. With 21.21, Oisin recorded a new county record and gold, with 4cm separating Robert and Liam on 16.99 and 16.95 respectively. Behind these, there were many Craughwell throwers (and some from other clubs) jostling for the remaining 3 places in Sligo. Ball-throw Connacht medallist in 2012, Oisin Quirke won the other silver, with two new athletes, Michael Leahy and Cathal Hannon winning bronze. The latter three have tremendous potential given how late in the year they have started the event in earnest. Just behind the bronze medallists were fast-improving new recruits such as Sam McIlrath, Jack Kinane, Adam Stewart and Daniel McInerney. 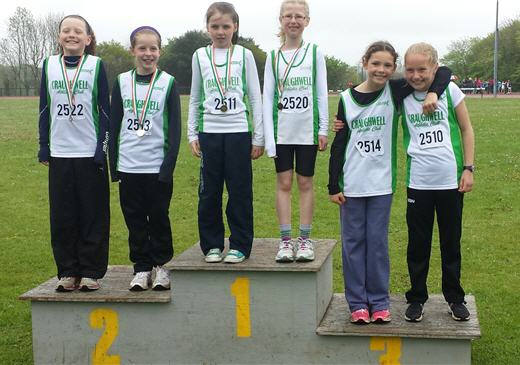 In the Girls event, Rebecca Lynch secured a third gold medal of the day (plus a new county record) when narrowly pipping Regina Maduka (13.15m) with a best of 13.67m. This pair are joined in the Connachts by Holly Comer (whose 10.12m throw was incredible given her first practice with us was just 2 days earlier) and Alex Slamas, who was a gold medallist last year, with great potential.  Alex was also our leading sprinter in the girls’ 60m. She has been our stand-out sprinter at training when running in her socks, so the wet conditions didn’t suit her, yet she was 6th with Hannah Whelan, while Hannah Hynes, Eve Ayo, Oliwia Koman and Regina Maduka also impressed.

0.02 seconds was all that separated Lukas Schukat and Niall Cummins in the Boys’ 60m, with Niall earning his place in Sligo to pair with Conor Hoade. The latter again proved himself our best sprinter with the 3rd fastest time of all u11s that day. Kieran O’Connor, Robert Urquhart and Mattie Kennedy recorded very quick times also.

Finally, 600m brought us two more sets of medals – with Emily Miskella and Rebekah Flynn running tactically astute races to trail GCH’s All-Ireland silver medallists from last year by a very respectable margin in 2nd. Caoimhe Connolly and Molly Sullivan were just outside the medals but will clearly form a formidable cross country nucleus next Autumn alongside Rebekah and Emily. Hannah Whelan and Siun McInernay were a very impressive 6th place.

There was a very creditable third for Adam Stewart in the boys’ race alongside Liam Mulveen, who was winning his 3rd medal of the day. Conor Hoade and fast-finishing Eoin Byrne were very close to medals in 5th. Next Autumn, these will also form a superb club cross country team with the likes of Darragh McCartin and Noah Keane (who just gets better and better at long distance running). Biggest performance in this race was arguably by Cian Daly, who was 5th of the Craughwell runners in 7th place. Well done to Cian in his first year and competition.

Thus ended a remarkably successful and enjoyable day for under 11s. Well done to all who participated and did themselves and their coaches and parents so proud. 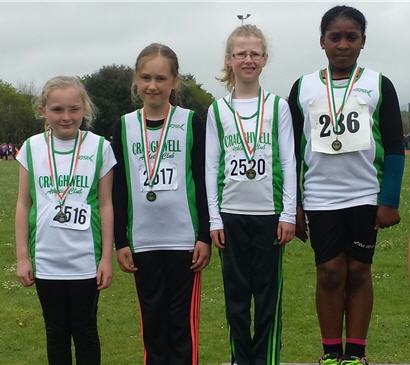