Fantastic news filtered its way during the week to three of our most talented athletes Chloe Casey, Jerry Keary and Laura Cunningham each of whom have been selected for Irish U16 and U18 teams to contest the forthcoming Celtic Games international which will be held in Dublin on August 5th.

To be selected to represent your country in any sporting discipline is one of the highest honours that an athlete can aspire to and for three of the club’s athletes to be selected for the same international is just incredible and one of the proudest moments in the history of the club.

It’s no coincidence that all 3 athletes are three of the most consistent athletes at training every week with each having trained more than 100 times in the past 12 months. Its great encouragement for everyone in the club to see their efforts rewarded at the highest levels. And it’s only a matter of time before several other very talented and very dedicated athletes in the club also get called up for Ireland.

Well done Chloe, Jerry and Laura! They are pictured below with Club Chairperson Marion McEvilly after receiving a training grant from the club in support of their endeavours to be the best. 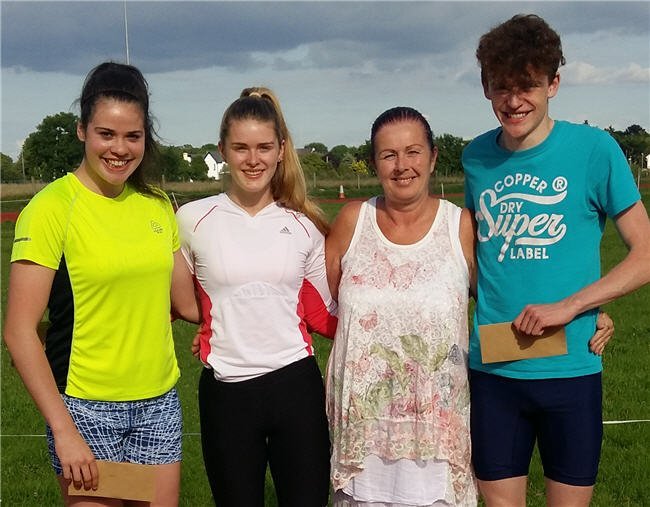 For Chloe, this is her second international vest having been selected last year on the Irish Schools Pentathlon team.  On this occasion, Chloe has been selected for the discus on the U16 team – remarkable progress in a new event in such a short space of time and an event which in which this multi-talented athlete has huge potential.

For Jerry, this is also his second international vest having been selected last year on the Irish Schools track and field team, where he went on to take the silver in the high jump against elite opposition. Jerry has again been selected for his favourite event the high jump.

And for Laura, this is her first international vest having gone very close to selection last year in a few competitions. Laura has been selected for the triple jump and it is a just reward for years of hard work and dedication from Laura that commenced way back in 2007 when she joined the club when in 1st class.

Laura’s selection makes her the 18th juvenile athlete from the club who has been selected for international duty, a growing list as follows: