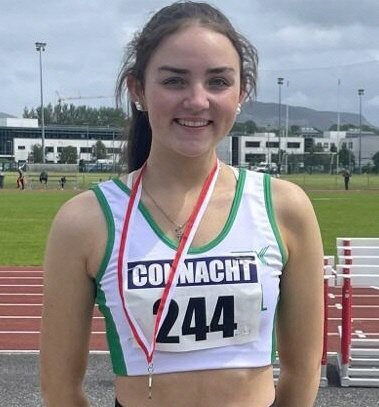 Following her fantastic first Irish National title at the weekend in the U18 Girls High Jump, this is a short summary of Jade’s dedication and talent that led to her success and perhaps parents could let their younger athletes have a read of this article as it will help motivate them when they read about Jade’s progress from U12s to U18s.

Jade is in the club since she was knee-high. Her first taste of National success was as an U9 in 2013 when she was a sub on our U9 Girls relay team who took bronze in the National finals. That whetted the multi-talented athlete’s appetite for the National stage.

She dabbled in cross-country over the years with the club and with Craughwell NS, placing 27th in the National U11 Cross Country in 2015 but quickly gravitated towards the high jump when she hit the U12 age group.

That year Jade placed 5th in the Connacht Indoor U12 High Jump and later placed 7th in the Connacht Outdoors U12 High Jump with a best of 1.15m on both occasions. That summer she entered into the All-Ireland ‘B’ Track & Field which is open to anyone who didn’t qualify for the ‘A’ Championships and it turned out to be a watershed moment as it gave Jade her first National High Jump medal with an excellent leap of 1.19m to claim the silver medal.

Jade’s success was not just confined to Ireland, with a 4th place finish as an U13 in the Scottish National Indoors in 2017, a bronze medal in the same championships as an U15 in 2019 and the coveted gold medal in the U20 age group earlier this year after a marathon jump-off to win the title at 1.64m – the only time an athlete from the club has been involved in a sudden-death jump-off.

The club is very very proud of Jade and you can see from her progress above that success was not instantaneous and a lot of hard work has taken her to where she is. Definitely one to watch for the future!