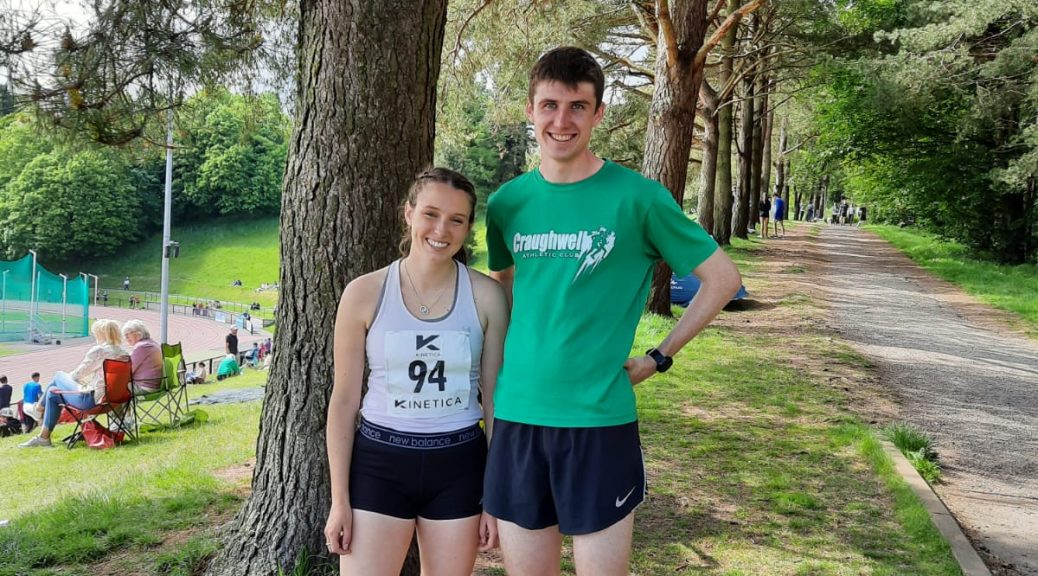 After probably the longest gap in competition in Ireland since the second world war, a glimmer of normality returned to our lives this weekend as Craughwell AC athletes returned to competitive action.

First up the entree – on Friday Night, Jamie Fallon and William Fitzgerald took part in the Formula 5K Timed Training event in Tynagh over a fun and fairly flat outdoor Karting course. The training event was held by Sean McDermott to full Covid compliant conditions and had a level of organization and social distancing reminiscent of the Galway vaccination center in Ballybritt! People ran in pods of maximum 15 and there were some strong competitors in each pod. Standards were high with no less than FIVE athletes breaking the magical 16 minute barrier on the evening as the sound of squealing tyres was replaced by the boingy-boing of luminous Nike trampolines.

The two lads ran in the 7:30pm slot which had probably the deepest field having over half the competitors break the 17 minute mark. Like many others, Jamie has rediscovered his love of the sport during lockdown and had intended to have a good hard effort despite a pretty heavy week of training. William has had a slightly broken few months with achilles and wasn’t sure how he would run but set his mind on sticking with Jamie for as long as he could. That is how things unfolded with the two lads immediately forging a good lead and working their way around each of three twisty laps – Jamie in front and William slotted in on his heels keeping him honest. On the last 500m the gap started to widen and Jamie took the win in 15:14 followed by William in 15:21 which equals Williams current track PB. These were the two fastest times on the day and the two lads were rightly very happy with their efforts. There were other excellent performance on the night from Club members with Jamie’s mum Irene Fallon running 26:43 and Noel Gorman finishing in a very strong 21:18.

Next up on Saturday Sinead Gaffney and Jack Miskella took part in the IMC Belfast in soaring temperatures but mostly ideal conditions. In a smashing one-two they both smashed their own Club 1500m outdoor records!!

Jack was up first and unfortunately for this report, many routers around Craughwell were kicked as the stream started to fail before Jack’s run so we missed the first half. When the stream connected mid-way through the third lap, Jack was slightly adrift of the main pack at this stage but gaining as it seemed they went out at a suicide pace and he judged things better than some. Jack clocked himself at 44-high at 300m which is sub-2 800m pace – definitely not sustainable! He hit the bell at 2:55 and pushed on to catch at least two with an exceptional 60s last lap. His time in the end was 3:55.01 – so close to a 3.54 but an absolutely smashing new PB and club record he can be delighted with. It was also great for the West to see some of Jack’s training partners Keith Fallon of GCH and Finley Daly of Sligo AC set great fast times in the race. [East Down have just uploaded the full race with a brilliant little race clock and you can watch it below! Fair play lads!]

Next came Sinead! The goal was a sub-4:50 which is about 77s laps for the distance. The start was ferocious as she stuck with the pack, going through 300m in 52s – this was far faster than the planned pace so the risk of a blow-up was high! The field settled then to a more realistic pace and Sinead managed to hold it together really well for the next two laps to hit the bell at 3:29 as the field started to stretch out again. She put in a mighty effort over the final lap to close in 78 and finish with an exceptional 4:47.19 club record, knocking a full 3 seconds off her mark from last year. Definitely more to come from the determined UL Medical Student.