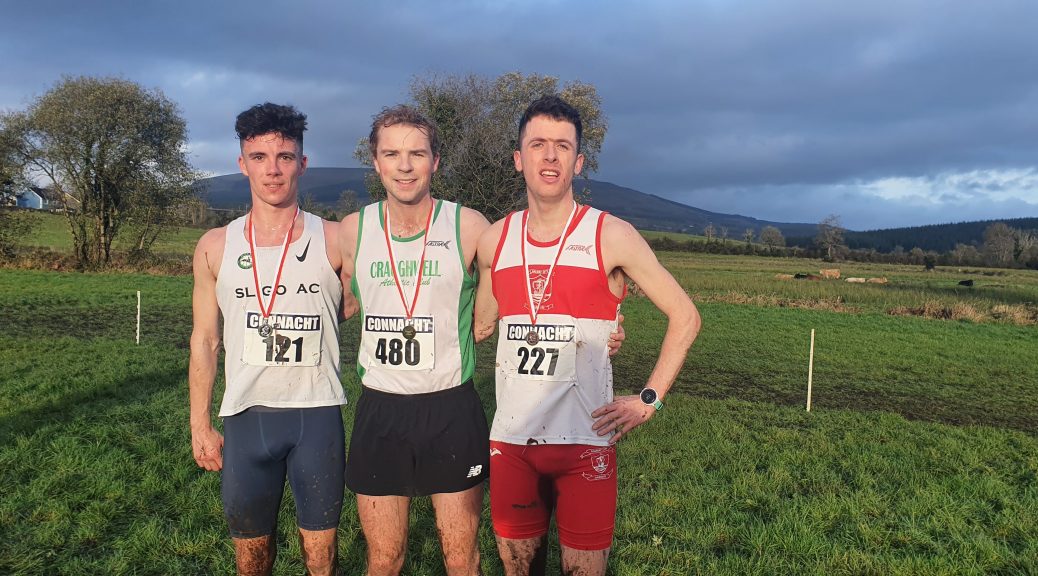 The Connacht Even-ages and Senior Cross Country Championship took place in Drumshanbo, Co.Leitrim. Set in a spectacular setting, the course was perhaps the most challenging in recent memory. It consisted of a short 1 km loop dominated by a long steep hill which reduced many contestants to a crawl and some to walking.  Fuelled by the rain of recent weeks, the entirety of the loop was soon covered in thick mud – if you came in search of a challenge you went home happy!

For the last few years, Connacht dropped the championship format in favour of a league, but it made a welcome return this year and the quality of the racing was very high (there is still a league, but the race two weeks before nationals is the “Championship” event for which medals are awarded). Jamie Fallon came away from the revitalized Senior men’s 8km championship race with a famous win.

Jamie set his stall out early, moving to the front just a few strides clear of the classy Finley Daly of Sligo A.C and John Moroney of GCH.  Despite Jamie attacking the hill hard each lap, the gap stayed fairly constant for about three laps but then started to grow and by the end he had built up a sizable lead.

Ben Ryan also ran for Craughwell and showed good form up the hills to finish well up the field.  Both Jamie and Ben have received Irish caps for mountain running and their strength showed on the hill.

As a measure of the toughness of the course – Jamie is a runner with Club Records over 5k and 10k of 14:35 and 30:57 respectively. His average pace over the 8km course was just 3:50/km and he still won by about 45 seconds or more in the end against tough opposition.

In a high standard u18 boys race, Mathys Bocquet joined the breakaway leaders and was looking very strong at 5 km but just ran out of steam on the last lap to win an excellent Bronze.

Liam O’Connell also had a great race in the u18s – he went out a little hard at the start but settled himself and finished strongly in 9th.

In the u16 4km race, Declan O’Connell finished 2nd out of age in a fierce battle with the national Champion.  He will fancy his chances on the firmer ground of Donegal in two weeks time.  Stephen Ruane had a truly outstanding run to finish in 4th – beating some extremely talented and older athletes en-route.

Stephen Joyce placed an exceptional 3rd in the u14 race after a strong battle with teammate Alan Hallinan who came 4th.  Oisin O’Donovan was 22nd.  U14 Claudia Coyle also ran strongly to come 17th, but such was the standard that it was not enough to qualify her on this occasion.

Donal Coyle was 10th in the u12 in a superb effort, just ahead of Sean Colleran in 19th. Both lads scored on the Silver medal winning Galway team.

Sophie Meehan had no problem with the hill as she came a fantastic 8th in the U12 girls race to lead the Galway team to Silver. Faye Whelan came 55th in her debut Connacht Cross Country.