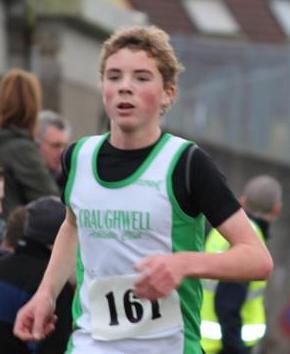 Jamie’s performance was all the more commendable as it comes on the back of a disrupted period of training for the hard-working athlete who had a niggling injury for the last few weeks….

Jamie led his Calasantious Oranmore team to 4th place in the team event, just 12 points short of the bronze medals. It was a fantastic achievement by the team which is mostly comprised of 800m runners with Damien O’Boyle placing 28th, Nicholas Sheehan 29th and John Cormican 56th.

In the minor boys race, Ben Sharkey finished a commendable 45th while in the junior boys Matthew Barrett led his Calsantious Oranmore team home in 43rd place. It was a huge improvement for Matthew on his Connactht placing of high twenties (to be confirmed when Connacht results are published). James Cahalane placed 54th in the same race with Liam Moran 58th, Oisin Doyle 85th and James Delaney 94th.

Jamie is carrying on a great family tradition as his uncle is the legendary Jimmy Fallon who represented Ireland in cross country on numerous occasions. His progress since commencing athletics at the age of 9 is inspirational. He made his debut for the club cross country aged 9 in 2006, placing 35th in the Connacht U11 championships that year. Through hard-work and talent, Jamie gradually progressed up the field in various champonships, placing 23rd as an U12 in 2008, 24th as an U13 in 2009, 5th in 2010, 2nd in 2011 and 2nd in 2012. Such a progression should be a big encouragement for any younger readers of this article!

Jamie becomes the 8th juvenile athlete from the club to achieve international status, a list which includes