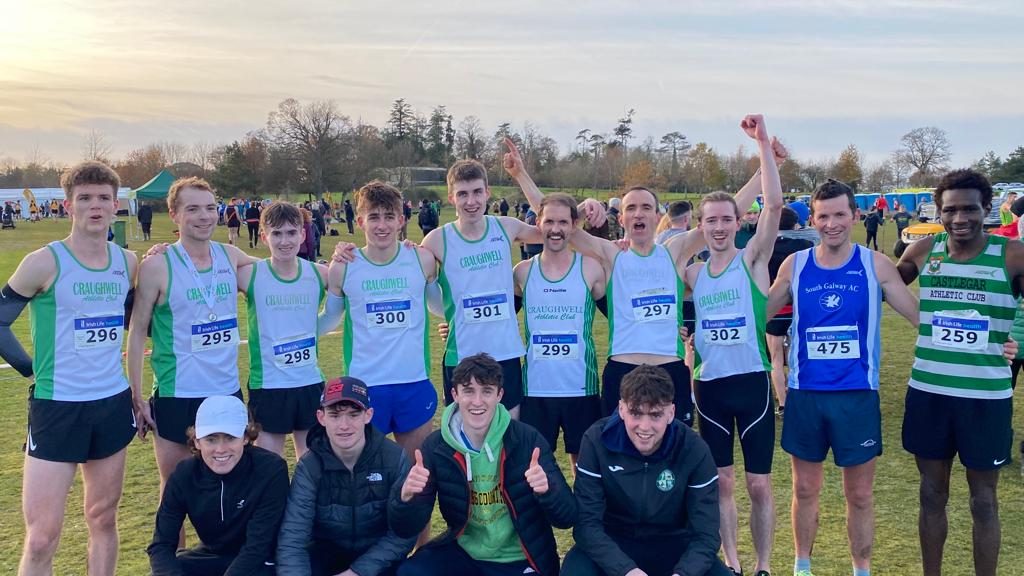 Moods were buoyant on a perfect bright, Sunny cold Winters morning as the Craughwell AC crew made their annual trip to the National Uneven ages and Novices Cross country. It was held this year in Gowran, Co. Kilkenny and this turned out to be a day for the record books!

The course was a classic cross country course – starting with a long fast downhill on a Golf Driving range and looping left into an adjoining field full of challenging drags and treacherous footing from the cattle that had recently vacated. The u17 boys 5km was particularly challenging as it had a dog of an extra hill.

Triple Silver for the men!

The story of the day was definitely the Men’s Novices team who won a historic Silver, led by team Captain Jamie Fallon who himself won an incredible individual Silver.

The club fielded our best ever men’s team of EIGHT strong runners, including SIX current club record holders over distances from 800m to Marathon! There were over 220 runners in the race and to give some idea of the standard – anyone in the top 100-130 would be a sub-35 minute 10k runner easily. I found the course quite narrow in most parts and tricky to overtake much with that size of field, so the start was critical if you intended to challenge, which I did not so it was fine 😁.

Jamie started out with intent, and there are videos of the start where you can see him sprinting like a madman to the front, closely tracked by William Fitzgerald. As the lead group of four broke clear, William held back in about 30th, wary of the insane early pace.

It became pretty confusing for the commentators to sort out the sea of Green and White as Togher, Craughwell and Raheny battled it out at the front of affairs. In the end Jamie ran the perfect race and finished in 2nd, just 10 seconds off first place and a good 4 seconds clear of Bronze. This just pips our best ever individual result in the Novices before which was Jason Broderick’s fantastic Bronze in 2015.

William ran a perfectly paced race – covering each hilly km in 3:04 and working his way from about 25th position to a remarkable top-5 finish, just 7 seconds behind Jamie over the 6.2km. Each time it came to the hills the mountain goat pressed and caught people. William was very very close to claiming 4th in a dramatic sprint to the line but was just held off.

Next home for Craughwell was Patrick Noonan in what many felt was the run of the day, but nobody in Craughwell was surprised. NUIG Student Patrick is really loving his training at the moment both in College and in Craughwell and finished an exceptional 19th. Fourth home for Craughwell and final scorer was Jack Miskella. Jack ran an exceptional 8:40 3km in Athlone on Wednesday so knew he was strong and he did the business again here – finishing 27th. A personal best for the Novices and he can add Club and County Silver to the County Bronze he won last time out.

Next home was Kevin Mooney whom Movember has turned into a young Prefontaine in a fantastic comeback run to come 47th, despite not getting much time to train recently with life closing in on the busy young father. Kevin was closely followed by Kyle Moorhead who dug into the well and then some with a smashing 57th place. After Kyle came Mark Davis (77th) and Paul Joyce (87th). Neither myself or Paul are in top shape, but we played off each other nicely and it made for a pretty enjoyable race for both of us – we had fun working together picking people off for the whole race! Top-100 in the novices is a good day at the office!

Four of the Craughwell lads were also among the top 6 scorers on a Silver medal winning Galway county team, along with the popular Abas of Castlegar and David Carter of GCH.

Both the Club and the County teams were only a single point off Gold, which is hard to take, however it does mean that everyone but Jamie is eligible to run next year so there is a Silver lining (or lining to the Silver?)!!

I am not sure when the last time was that a Galway or Connnacht club medalled in the Novices – I’ll need to dig through the results to find out, but it’s been quite some time I’d say – I think Sligo AC might be the last one years and years ago..? Will need to check!!

In the Women’s event, Emma Boyle had a stormer, covering the 4km in just over 16 minutes to finish in 68th place. Sinead Gaffney was also going very strongly for the first 2km but took a fall on the treacherous footing and had a lot of trouble getting up and going again. She dug in and finished a very creditable 105th but it was one of those outings that can happen in Cross and can be very disappointing and hard to take – she will be back!.

In a great show of the Junior strength in the club at the moment, the U19 men won a fantastic Bronze medal with a superb two in the top 10. Sean Cotter gave his all to challenge for individual honours and was right there until the last 1-mile lap where an injection of pace and the hill took it out of him and he dropped back to 6th, still a fantastic result and he gave absolutely everything he had, possibly too early in the race.

Oisín Davis also meant business today and he finished a super 9th, after fighting his way through a dark patch in the middle where he got tailed off the leading pack. Ross McGuinness ran a very smart race to come top-35 out of age. Ross dialled back the early pace and was moving through the field improving his position all through the race. Anthony Boyle has been in and out of training for much of the early season but knuckled down in the last few weeks and pulled a fine run out of the bag today to finish 64th, never giving an inch for free.

Luke Burke has had a lot of interruptions this last few weeks and an injury before that – he knew he wasn’t in any way fit but also that the team would likely need him so he showed his great character and and ran a strong race to finish 71st. Both Luke and Anthony are not even 10% as fit as they can be or will be!

This is the 2nd National team medal this exact team has won, the previous being the U16s 3 years ago, also a Bronze! Sean and Oisín were also part of an u11 team that won Silver in the u11s in 2014 though Oisín was well off the team placings on that occasion in 153 place so much progress made!

In the ladies U19 there were no Craughwell Competitors, but the popular Helena O’Keeffe who regularly trains with the gang had a superb 38th placing and we were delighted for her.

U17 Anna and Killian PB

In the u17s, Anna Cotter had an outrageously good run, beating her Santry time by 40 seconds, on a course that is far, far slower, and this despite losing her shoe! Anna finished in 57th out of the large field – definitely her run of the season.

Killian Walsh ran in the u17 5km race which had the toughest route of the day as this course involved twice scaling a challenging extra hill which was far steeper than anything the rest of the field had to deal with. Killian finished a fantastic 85th, a huge breakthough run – in his best ever cross country performance. Killian covered the 5 tough Kilometers in 18:15.

U15 Declan does it again

U14 champion Declan O’Connell stepped up to the U15s and had a great race to finish top-12 out of age, an incredibly difficult thing to do.

Stephen Joyce won a fantastic Bronze in a great U13 boys race which was won by South Galway’s Luke Walsh and the South Galway team ahead of Moy Valley in a great day for Connacht. It looks like this South Galway team and the Craughwell u14 boys team of the next age could develop a nice rivalry over the coming years! The Craughwell u13 Boys team was 7th today with Stephen being followed home by Alan Hallinan in 21st, Oisín O’Donovan 101, Alan Warde in 137 and Zach Keane in 158. Stephen and Alan each scored on the Silver-medal winning Connacht team.

Aeveen Kelly was a superb 40th in the U13 girls race to win a Connacht region medal, followed by Claudia Coyle in 60th. Both girls continue to develop and are a credit to their coaches.

In the first race of the day, Sophie Meehan was our sole competitor and she ran exceptionally well to finish in 33rd position from the huge field of almost 180 after a great run and scored well up on a Connacht team that was a close 4th.

“And the Second-last shall be Second-first”…

The Novices has a special place in our hearts because when we set up the Craughwell Senior Club in 2005, it was our first race as a club – the medal table on that day makes good reading! I was 89th, followed by Mike Tobin, Bill Doran and Diarmuid Quill. It was on the grounds where the AIT track is now and we had a bus load of kids competing. When they asked “How did ye do?”, Mike Tobin’s quick response was “We beat Athenry!!” and it got a massive cheer from the kids on the bus!!

Paul Joyce and Sinéad Gaffney are the only other Craughwell AC athletes aside from myself who ran both then and yesterday! Paul and Sinéad were among those kids cheering on the bus and rocked it in the u12 race – they haven’t changed a bit!! Jamie didn’t compete for another 2 years, first lining up as an u11 in 2007!

The force was strong with us!

This aged well!! Here is the goofy preview of the older teams, might as well leave it here so all the stuff from the event is in one place!