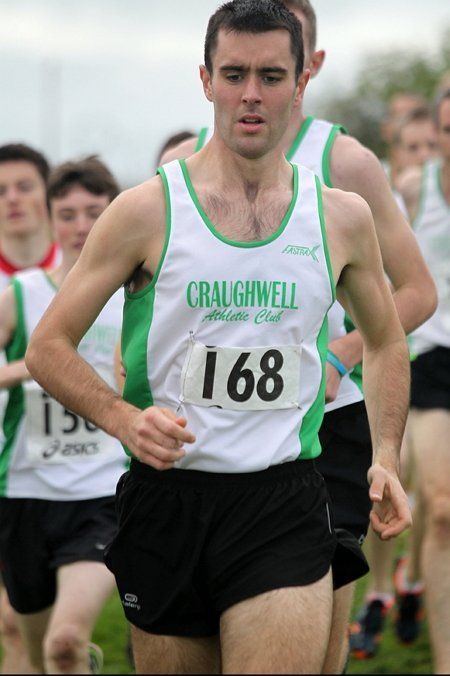 Craughwell had a great day at the Galway Senior Cross Country.  In one of the most competitive Galway Cross Countries in years, popular Craughwell AC athlete Jason Broderick was a hugely deserving winner.  We knew Jason was in great form after an awesome performance on Wednesday in the Army 10k where he finished in a superb 2nd place in a pb 33:12.  However he wasn’t too confident of his own chances this morning after struggling with back niggles for the past few days (credit Ian Egan of sportspoint for doing a lastminute.com repair job on it).  When the siren went Jason put his concerns out of his mind and he and clubmate Jamie Fallon broke clear of the field from the off, and after about a mile and a half Jason pushed on further driving all the way home to a great victory.  This is the 3rd year in a row that a Craughwell AC athlete has taken the Senior title.

What a squad – missing from picture: Ollie Mullins

Craughwell dominated the individual events, winning Gold in the Senior, u18, Junior, Intermediate and o40 categories.  DCU powerhouse Neil Greaney was second home for Craughwell, finishing in 4th place overall to win the prize for first Junior.  I can’t comment on the ins and outs of his race as he was mostly too far ahead for me to get a good view of proceedings, a good sign in itself!

Hugely talented Paul Joyce was next home in 5th place winning second Junior in a fine run.  Paul only decided to run the event last minute and needing to buy a pair of spikes, he decided to run barefoot – the gamble worked out as he managed to stay on his feet and stay in the mix for the entire race.  After the race, Paul called his dad and the first question he was asked was “did you beat Mark?” – rest assured Gerry he kicked me far into touch with those bare feet!

Matthew Moran had an incredible race, finishing in 8th place and winning the u18 category – a super achievement considering the amount of injury trouble he has had this year.

Next home for Craughwell was myself Mark Davis in 11th place – mustering up a sprint finish good enough to rob Gerry Carty of o40 Gold at the death (lucky: I think he only let me past because he didn’t realise a man with my youthful good looks could be over 40 ;-)).

Johnny Lane was close behind me in about 13th position, followed closely by Tommy Niland in about 15th or 16th.  Johnny and Tommy were both a bit disappointed with their runs, but they have no need to be – it’s all about the work, and they are just getting back into it – those were both fine runs based on what they have done.  Despite the lack of readiness, Tommy’s run was good enough to secure the Intermediate title – this adds to his Novice title from a couple of years ago – only the Senior left to win, and with the right preparation I know he can do it!  New members Daniel Larkin and Gavin Cooney experienced their first cross country and gave excellent accounts of themselves.   Eddie Corban also had a fantastic run – finishing well what seemed a 50+ strong field and putting in a pacy finish.

With 4 in the top 8 we had a great chance in the team positions, but when the totals were added up we finished dead even on points with our big city rivals GCH – they deservedly took the team Gold by getting their last man home just ahead of our last man – the second time this has happened to us in the last 3 years but fair play to them, such is athletics!  It was still a fantastic result from the village club to match them for points.

It was not all good news… we were the unluckiest team I’ve ever seen with injury on the day – losing an incredible 4 top athletes through different injury problems in the one race.  Jamie Fallon was having an awesome run – well clear in second place overall with one lap to go when his achilles started to flare up and he wisely decided to call it a day.  Ollie Mullins was also bombing along in 6th place when his hamstring went with one lap to go.  Worst of all – John Cormican was hammering through the field in 7th or 8th place when he suffered a recurrance of a stomach/chest injury that dogged him last year – with only half a lap to go..  Paul Keane who has been a cornerstone of our Cross Country team for the past few years also had to drop out with Achilles injury (he probably shouldn’t have started at all).  It’s a tough game – in fairness GCH also lost one of their top athletes the mighty Matt Lockett in the warm-up.

It’s a credit to the current squad that we did so well despite all those setbacks, and the fact that we were missing many of our top athletes (mostly with injury.. such a tough sport!)  including Gerry Ryan, Conor Gillen, Martin Corcoran, Keelan Ryan, Damian O’Boyle, Peadar Harvey, Rob Hogan and Nicholas Sheehan.

Keep an eye out on Craughwell’s favourite photographer – John O’Connor’s flickr site for some more top quality pictures of the day like the ones in this article.