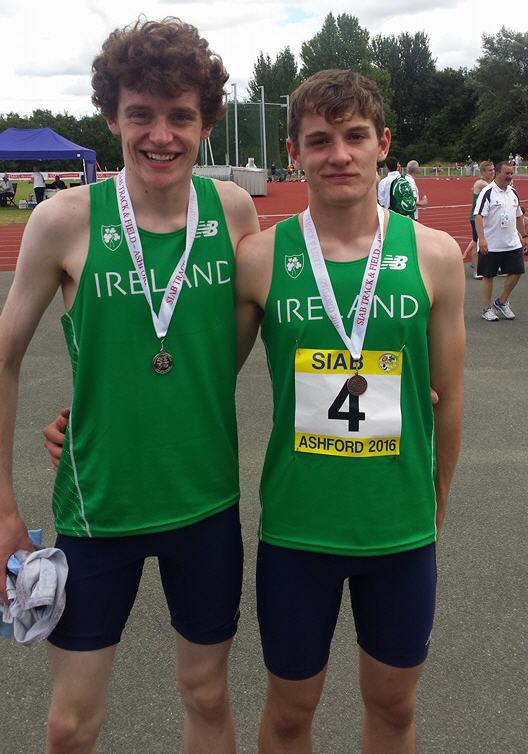 Congratulation’s to Jerry Keary and Nenagh’s Joseph McEvoy on fantastic jumping at the schools international in Kent yesterday where Jerry leaped 1.99m to claim silver and Joseph leaped 1.96m to claim bronze.

Jerry sailed over 1.99m on his first attempt to claim the silver in an elite international field. His jumps are listed above.

Jerry’s progression in the high jump has been remarkable this year. He has improved his PB from 1.81m from last year’s to 2.00 this year – leaping 1.80 in the Galway indoors, 1.90 in the Scottish indoors, 1.92 in the Galway outdoors, 1.93 in the Connacht schools and 2.00 in the Connacht outdoors, capping it all off with victory in the Tailteann Games with 1.95 and now 2nd place in the international with 1.99. To put his improvement into perspective, an equivalent improvement in the space of a year for a 2-minute 800m runner would be to run the 800m in 1:47.5 or for a 35-minute 10k runner to run their 10k in 31:20. And to even further highlight these massive achievements, Jerry had to take 6 weeks off training between the indoors and outdoors to get his appendix removed! Clearly it was a heavy appendix that was weighing him down :-).

It wasn’t all plain sailing for Jerry in previous years. Having medalled as an U12 in 2011 with bronze and a leap of 1.20 in the National indoors, Jerry placed 5th, 6th and 7th on many occasions in the intervening years at National level, jumping 1.30 in the U12 outdoors, 1.40 and 1.43 indoor an outdoors as an U13, 1.50 and 1.53 as an U14 and 1.50 and 1.63 as an U15. Despite many times coming close to the podium, Jerry never lost heart, continued to train, continued to compete in every National final and finally returned to the National podium as an U16 when taking the National silver with a leap of 1.70m in the indoors. He progressed from there to leap 1.75m and then 1.81m in the outdoors before his astronomic improvements this year.

All our athletes should take inspiration from Jerry’s progress. The standard of athletics in the UK is world-class – Jerry is right up there with the best of his age in these islands. But that right was well-earned as you can see from his progress and commitment over the years – so all of our athletes should be encouraged by this. Keep training, keep improving, eventually you will get to the top!

And continuing a wonderful year for the U17/18s in the club, Laura Cunningham made her debut on the County Galway team in the National League today where she leaped 1.50m to take 3rd place in the high jump and threw the javelin out to 23.54m to take 4th place in that event, only 44cm shy of breaking our senior club record in the javelin.