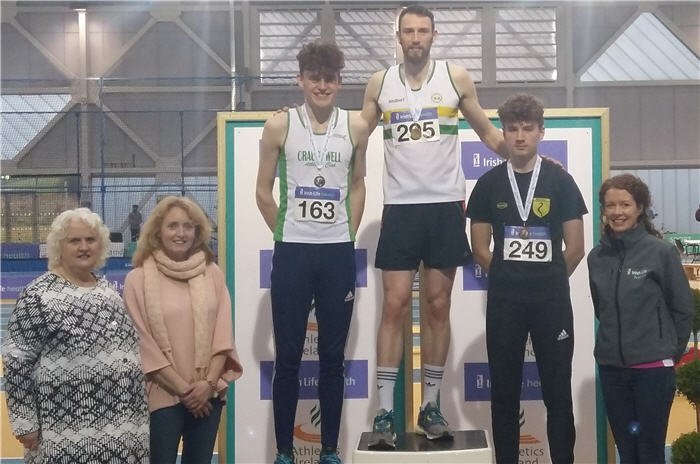 Another great day of athletics at the National Senior Indoors saw Jerry Keary claim his first senior medal at National level when he leaped 1.90m on his first attempt to claim the silver medal and was unlucky not to go higher when just brushing 1.95m off on his final attempt. Jerry becomes the first male athlete from the club to claim a National senior medal indoors and his 7th National Indoor High Jump medal with his first coming as an U12 in 2011 when he won bronze with a clearance of 1.20m. He followed that up with silver as an U16 in 2015 with a clearance of 1.70m, silver again in 2016 with a clearance of 1.89m, silver again in 2017 with 1.96m and bronze in the U20s with 1.90, silver a couple of weeks ago in the U20s with 1.90m and now silver at senior level with 1.90m. Super jumping and a lot more to come in the future from a great athlete.

It was also another wonderful day for Sinéad Gaffney. The ink had barely dried on her new club record of 2.19.56 from yesterdays 800 semi-finals when Sinéad ran another electric race in the final of the womens 800m at the National Senior Indoors and knocked another half-second off her record when crossing the line in 8th place in a time of 2.19.10. To run a PB and a club record is special, to do it twice in less than 24 hours is extra special!

Well done Sinéad and Jerry, the club is proud of you ?.