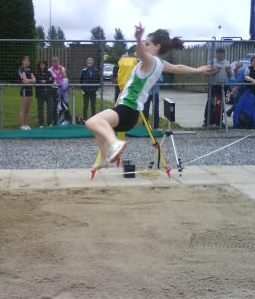 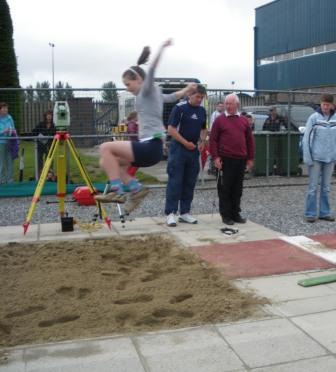 Last weekend saw another superb performance by Craughwell AC’s high jumpers and long jumpers with 3 National titles and 2 bronze medals, along with a super sprint silver medal for good measure. The club is rapidly establishing a reputation for itself as one of the leading clubs in the country in the jumping events and were unlucky in fact not to pick up 3 more medals in high jump and long jump with Maria McNamara, Tara McNally and Dandy Murray missing out.

Aidan Conneely had another bumper weekend with long jump gold in a new PB of 4.79m and silver in the U13 80m sprint in a time of 10.48. Aidan’s final jump was measured at 5.05m but he broke by about 15cm. Claire Ryder leaped to her 4th National long jump medal in the U14 girls’ event, adding over 20cm to her PB when taking the bronze medal with a jump of 4.86m. Claire in fact registered 4 long jump PBs on the day – leaping 4.64m on her 1st attempt, 4.70m on her 2nd, 4.82m on her 3rd and 4th attempts and 4.86 on her 5th attempt! A fantastic performance particularly since Claire is still troubled by a niggling injury and has been unable to do much sprinting.

The club's rich vein of success in high jump continued with ……

Tomás Keehan clearing 1.75m to win gold in the U17 boys’ event, Ellen Treacy leaping 1.35m to claim the U13 girls’ National title and Ella Bryan jumping 1.45m to take the bronze medal in the U14 girls’ event. Both Maria McNamara and Tara McNally were unlucky in their U15 and U12 high jump as atrocious weather conditions worked against them with Maria finishing 7th with 1.40 and Tara 10th with 1.15. Both girls would have finished in the medals in better conditions.  Just before her high jump, Tara sprinted to a fantastic 6th place finish in the U12 girls 60m in a time of 8.83, the fastest time ever recorded by a Craughwell U12 girl. 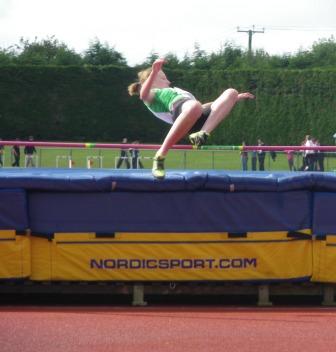 In the long jump, Dandy Murray was unlucky to break her final jump which would have almost certainly put her in the medal positions – as it was, Dandy finished in 6th place with a jump 4.23, only 8cm from the bronze medal position and great encouragement for Dandy in this event. Also, in the long jump Oisin Doyle and Gabrielle Tobin recorded new PBs of 3.69 and 3.81 when finishing in 12th and 14th places in the U12 boys and U14 girls.

Rachel Finnegan became the club’s first female athlete to compete in the steeplechase, where she recorded a good time of 6.06.18 to take 4th place in the U18 girls 1500m. Rachel also recorded a good time and new PB of 16.61 in the 100m hurdles, just missing out on making the final; and finished in 6th place in the 300m hurdles in a time of 49.13. Also in the hurdles, Jamie Spelman set a new PB of 12 seconds in the U13 boys 60m hurdles. In the U14 800m, Nicholas Sheehan ran strongly in his heat to record a time of 2.26.67 but missed out on making the final.

In the throwing events, Cathal O’Brien set a new club record in the U12 age group when putting the shot to 8.34m and taking 7th place overall. In the same event, Oisin Coppinger recorded a new PB of 7.23m to finish in 11th place. Also in the shot, Eimear Flaherty finished in 14th in the U13 girls with a throw of 5.55m – back a little bit on her top-class Connacht performances and unlucky to foul her first 2 throws. Oisin McNally completed the throwers, with a 9th place finish in the U14 javelin with a throw of 25.24. Oisin was very unlucky that the javelin and high jump competitions collided and he had to move over and back between the two events – something which probably didn’t help him in either event. Oisin finished in 9th place in the high jump also, with a jump of 1.35m.

Final event of the weekend was the U17 boys’ triple jump where Niall Rooney and Tomas Keehan were competing. Tomas of course already had a high jump medal in his pocket from the previous day, with Niall having finished 8th in that event with 1.65m. So it was redemption time for Niall in the triple jump. In 4th place going into the final jump with 11.92m, Niall needed an improvement of 9cm to get into the medals – and brought out a huge jump with his final effort to leap 12.09m to move into 3rd place. His hopes were dashed however with 2 other jumpers making gains to leap 12.16m and relegate Niall back to 5th place. Nevertheless, it was a very good performance, a new PB and a new club record in this age group. Tomas also hit a PB in the triple jump, with a leap of 11.73m on his 3rd attempt.

So that completed another busy weekend for the club – 6 more National medals and hopefully more to come next weekend!