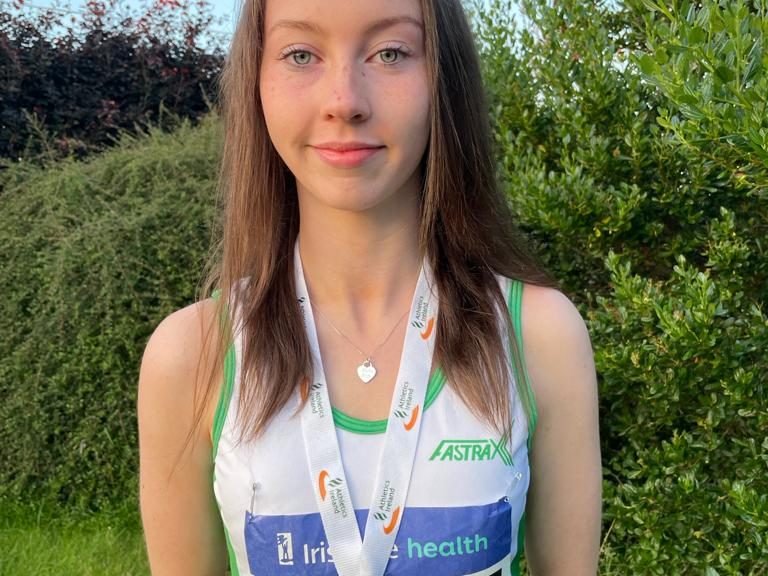 A windy and rainy Tullamore was the venue last weekend as Craughwell AC Athletes travelled to Tullamore to take on the elite of the country in the first weekend of the National Juvenile Track and Field Championships.  Craughwell had one of its best weekends ever winning an incredible 10 national medals – 3 Gold, 5 Silver and 2 Bronze, and a host of athletes claiming PBs and delivering performances to be immensely proud of. (This is a quick first report – check back as we will be adding some more detail later!!)

A sensational weekend of jumping saw a massive haul of 10 National medals by the club’s athletes, one of the most successful weekend’s ever for the club. The club boasted 3 National champions over the 2 days with Evan Hallinan taking the title in the U17 Boys Triple Jump with a massive leap of 12.46m. Evan followed this up a day later with a huge PB of 23cm to take the silver medal in the U17 Boys High Jump with a leap of 1.88m.

Lukas Schukat secured a fine National double with silver in the U19 Triple Jump with a best of 10.58 and bronze in the High Jump with a clearance of 1.80m.

Alisha Larkin recorded one of the best performances of the weekend going within 1cm of Sinead Treacy’s club record to take the silver medal in the U19 Girls Long Jump with an incredible leap of 5.43m.

Sean Hoade jumped an outstanding distance of 5.22m to take the silver medal in the U14 Boys Long Jump while Darragh Kelly leaped an impressive 1.60m to secure the bronze medal in the U16 Boys High Jump.

Though the jumps stole the show for Craughwell on this weekend, there were some fine performances as well in the other events.

The standards in Irish distance running have never been higher – most events saw times well under the national record.  Oisin Davis took a brave strategy in the u19 men’s 800m, moving through 400m in 55 seconds in the Silver medal position, however it was windy and the lactate hit hard from 700m and he did well to hold it together to finish 7th with a 1.59.60 pb.  Ross McGuinness ran an excellent personal best of 9:16.98 to finish 9th in a stacked 3000m that featured among others European U20 Champion and future superstar Nick Griggs.  Mathys Bocquet ran the u16 3000m and finished 10th in 9.53.

In the Javelin, u14 Dean McNally was unlucky to finish 4th with a fine 35.82.  Kiera Meernagh was 7th in Javelin and 8th in Shot.