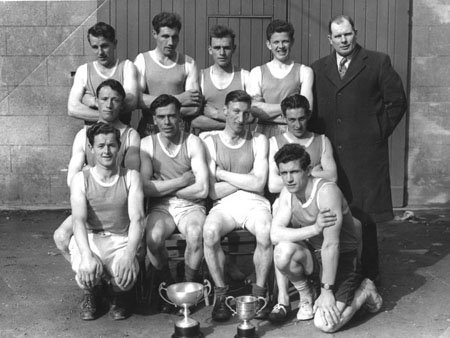 The club would like to express its deepest sympathies to club member Gerry Ryan and the Ryan family on the death of Gerry’s dad Kevin at the weekend.

Kevin Ryan was a member of the legendary Derrydonnell AC who dominated cross-country running in Ireland in the 50’s and 60’s. Athenry AC’s Mick Rice recorded their exploits in 2011 in his book “In Their Bare Feet”.

In the words of Mick “Those lucky few will recall that Derrydonnell AC was perhaps the most celebrated athletics club that Galway ever produced. The club won county, provincial and national championships almost without number over a period of nearly twenty years during the 1950s and ‘60s. The names of Derrydonnell’s star performers gained household currency all over the West of Ireland as a result of their championship winning exploits. Individual athletes like Willie Morris, Mick Molloy, Tommy Madden, Kevin Ryan and Willie Cannon gained near legendary standing amongst followers of the sport, not alone in Galway, but all over the country.”

May he rest in peace. Funeral arrangements are on rip.ie.

(footnote, as many will know Gerry went on to emulate his father’s achievements becoming one of Galway’s most famed and feared runners for many years and was still beating men more than half his age when he hung up the racing shoes a few years ago after winning the European Masters 10k in a time of 32.03 at the age of 49).