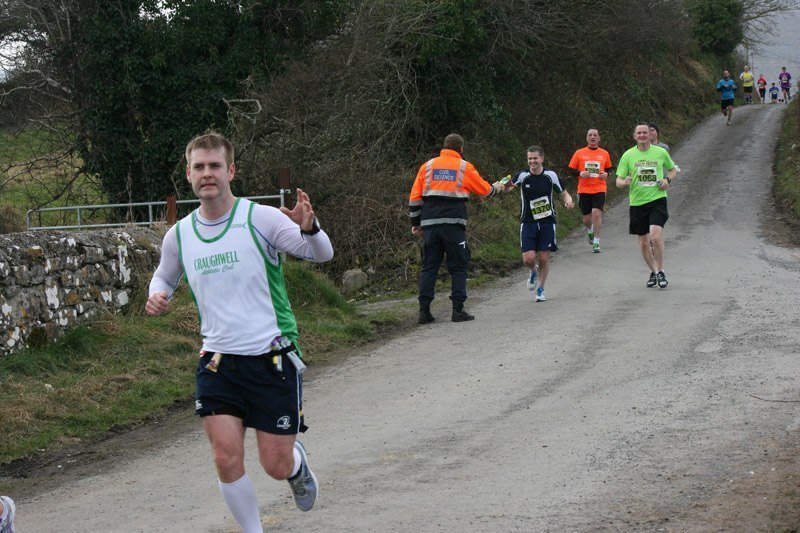 It’s the third year of the annual Kinvara Half marathon and 10k and my second time to run the half marathon. I did the10k last year. It was another glorious day in March for the organisers to show off Kinvara to the nearly 1500 die hard athletes who ran today. The quay looked very well decked out with its sponsors named along the finishing line.

I started the day with the kid’s race. My kids were running 2k which was organised by local principal Dominic Ni Geallaghoir. I was proud to see them running their first race both finishing in 10 minutes. Well done Kinvara N.S.

Daniel was laughing at the fact that before the race started, Helly, local character and type who walks about town with a plastic bag, every town has them, was sitting down having a fag and bopping to the outdoor broadcast from Galway Bay FM.

Kinvara pier at this time was beginning to fill up fast.  The 10K was going off in 10 minutes before the half marathon, and all went off without any fuss.  I got to the start line, having met lots of Craughwell singlets along the way.  Many were doing the 10K too.  I joined the 1hr 45 spacing team lead by Niall Callanan and Sean Conroy.  I settled into the race knowing that Rena and Noel were ahead of me and Jane was alongside me somewhere.  Karen and Alan Treacy were there too, fellow predator triathlon club mates.  I had my Garmin on, I ran very relaxed today, I usually struggle in training lately to get 9 minute miles, I have a lot of lower back trouble for over  18 months, so now this was my make or break it race.

I was running 8”05 for the first mile and I felt relaxed so I steadily kept that tempo up running 8”15 , 8”16 for the next two miles.  I felt better than last weeks 5 miler in Kilconerion.  I was running on the feel rather than pacing, everything was going well we had passed Killina Soccer Pitch, lots of testing undulating ground to test your stamina, we turned right after 7K onto the scenic burren backdrop.

A water stop from Shirley and her family was welcome. On we went, straight stretch of road for as far as you could see towards Burren Yoga.  We were half way, woop.  I had checked the Garmin at 10K and I was delighted having ran 45 minutes, this race was going very well.

We turned into the New Line, this was where I felt my hamstring pull two years ago, but all was good now.  I pushed on running in 8”30, 8”35 minute miles.  I haven’t  ran this well since 2010.  Another straight stretch of road until we turned right at mile 10.  The lad beside me touches the 10 mile sign, for him it is a big milestone, for me too.  I lean on his shoulder in a joking way as I see another hill, I ask him to carry me on.  We laugh in hysteria, 3 more miles to go …

The route is painstakingly tough, another two hilly climbs to counter before mile 12.  Done and dusted now, now onto the Moy road where the 10k race would have joined in as I can see a 6k marker …

Thanks to Tony and all running on Wednesday nights at Craughwell.  The speedwork is starting to show now.  Now I can look forward to the Craughwell 10.