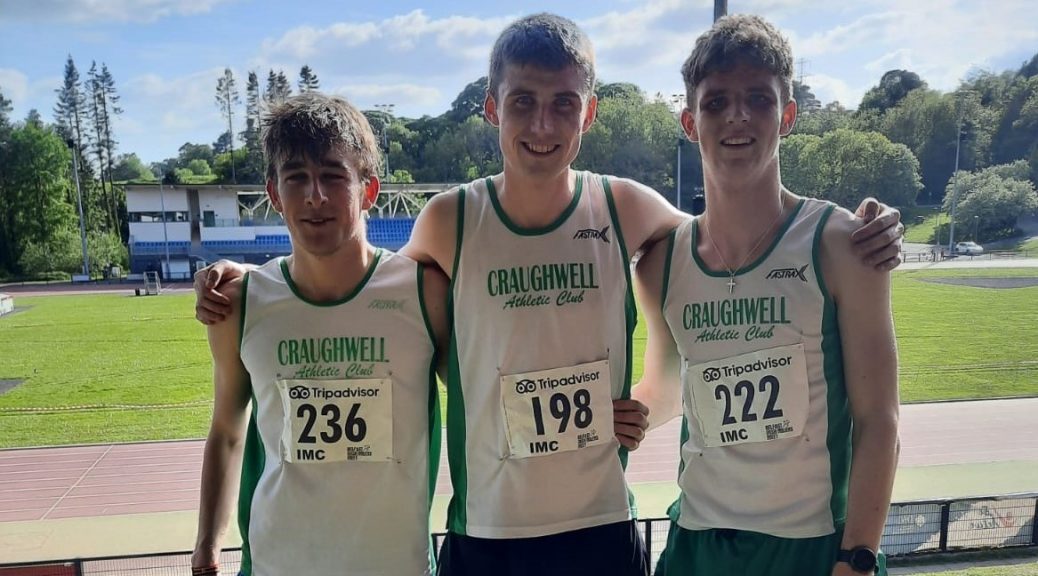 After a windy and blustery week, it was fantastic to see the wind blow itself out this morning as a contingent of Craughwell’s finest middle distance athletes made their way to the mecca of Mary Peters Track in search of new personal bests.

Kyle Moorhead, running the “B” heat had one of the races of his life to set a new Club Senior 1500m record of 3:53.95, a huge step up for him and really puts him in the big league and a massive 9 second PB. Watch the race unfold here. Kyle ran the perfect race, getting into a good aggressive position and tucking in on the rail for maximum efficiency. It was Kyle’s last lap that impressed me most – he managed to keep his form and strength all the way through to set a massive new pb.

Sinead Gaffney, running in the “C” race followed suit. Sinead ran smart race trailing in second all the way and pressed hard from 200m to power for home. For a moment it appeared that Sinead might have gone too soon but she rallied again to set a fantastic new Club Record of 4:38.42 unofficial. Like Kyle this was a 9s improvement from the PB she set at the same meet last year!. Watch Sinead’s great race here.

U23 Indoor 1500m Champion Patrick Noonan was seeded in the “C” race which might have seemed a bit harsh, but he had never ran faster than 4:02 before and the IMC organisers place more emphasis on times than titles. As it happened, the race turned out to be a competitive affair with Paddy getting into a good battle with David Williams of St. Senans. Paddy took the lead with 400m to go but didn’t buid up a lead so he was drawn into a major battle on the last circuit. Patrick wasn’t going to leave Belfast without his “sub-4” and in the end he held on to run a cracking new personal best of 3:57.51 and take the win for good measure. Watch Paddy’s race here!

Finally Jack Miskella lined up in a phenomenally stacked A race which included some of the UKs top Juniors against Irish superstar Nick Griggs among others. Jack started at the back tailing IUAA 1500m champion and training partner Aaron Brennan as the field spread out from the gun. In the end Jack posted I think about a 3:56-3:57 – not a PB but not far off and a fine run! Watch Jack’s race here.