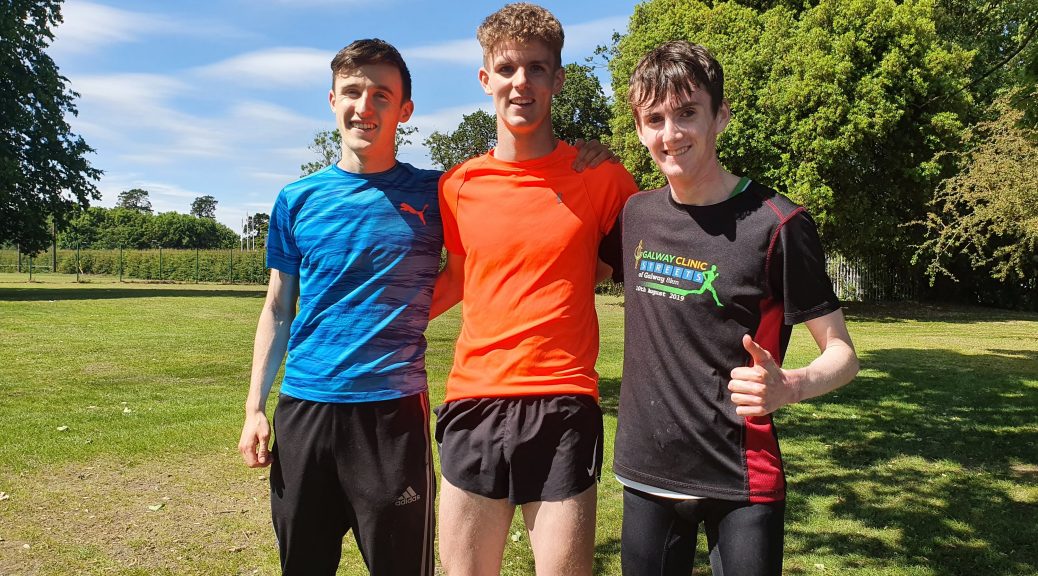 The National Junior and U23 Championships came a little early this year to enable elite Athletes to make the most of the final chance to push for European Qualifying marks. Three middle-distance amigos Kyle Moorehead, William Fitzgerald and Oisin Davis Athletes got up at dawn to make the trip to Santry and each delivered fantastic performances. Kyle and William, in particular, had superb breakthrough days smashing club records and personal bests.

Kyle and Oisin competed in the 800m the heats of took place first thing in the morning at which time the day was very cold and quite windy – times in the AM were well down across the field.

Oisin was up first in heat 2 with a large field of 11. Oisin has another year in the Juniors and his goal was to have another crack at the 2 minutes which in hindsight wasn’t a good goal in heats of a championship! His heat had several hotly tipped contenders including standout eventual champion Eoin Quinn and the multiple national champion Aaron Shorten. Confident in their closing pace, the favourites went straight to the front and slowed the pace down to a 60s first lap, saving their legs for the final while the field got boxed and tangled behind them. In search of his time, Oisin wove his way to the front on the final lap but got outkicked from the bend to finish in 5th with 2.02. A brave run – had his focus been qualification rather than time he may have gotten through – live and learn!! :-).

Kyle was in heat 3 which is traditionally a faster heat since the athletes know what time they need to qualify on time. So it turned out as Kyle and Matteo Mary controlled the heat to perfection. Kyle was passed as he eased up at the finish line but knew that he had qualified in 3rd with 1.59.05 – job done!!!

The 800m final was up at 3 and Kyle was able to chill, and even study a bit while waiting. Just before his race he watched William’s epic 5000m performance (see below) which really had him buzzing and ready for action. Kyle set out with intent in the 800m, always putting himself in a position to impact on the result. Led by the fearless Aaron Shorten, the pace was fast as Kyle split 40m in 55-high. With with Kyle With 250m to go Kyle made a brave move to 3rd and managed to hold that position until 80m were left to run, however he got overtaken to finish in a superb 5th.

This was 19 year old William’s first event as an u23 5000m. He is very young for the category not turning 20 until November. William likes to build his way into races and slotted himself into the back of the long lead train. As the train thinned out, William hopped from one carriage to the next until he settled in behind class act Thomas Devaney and the two worked well together. From about 2km to 4km, William settled in 3rd position took the lead of the chasing group with three ominously sitting on his shoulder.

In an absolute barnstorming last Kilometer one of the long-time leaders Daniel Stone started to fade and William lots of positions started to swap in a very exciting climax to the race. It looked like a bronze might be possible at one stage but in the end finished up William finished up in 5th with a sensational time of 15:03.60 – a huge 18 second personal best and just a second off Gerry Ryan’s 15.02 club record (which Gerry set at an incredible 47 years of age).

Patrick Runs to Perfection on Sunday

On Sunday, it was the turn of the popular Patrick Noonan to compete in the National u23 1500m.  Patrick ran an exceptionally smart race to knock 13 seconds off his season’s best and finish with a near personal best 4.09.60 for 9th overall well placed in a top class field. This is the second year in a row that Patrick has finished in the top 10 in the country for his age groups at the 1500m. Given the slightly windy conditions and the effect on times throughout the day on Sunday, I think this was a personal-best level effort from Paddy on Sunday.

This despite a season which was slightly broken earlier on with injury, work and study but he is starting to get a run of consistency together and enjoying his running which can only lead to good things.