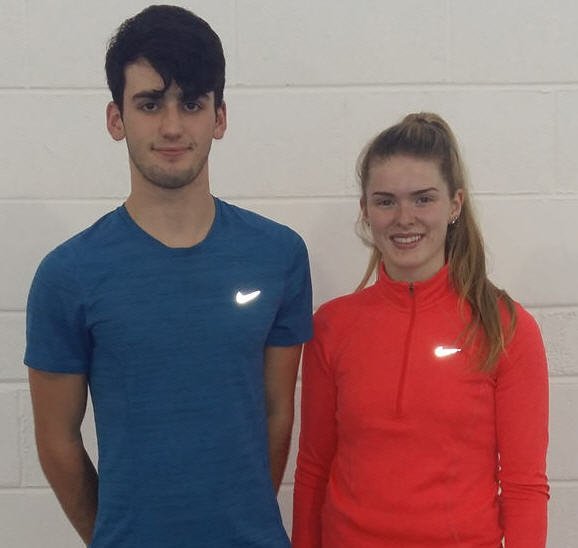 The Irish Schools Combined Events Championships took place yesterday with some exhilarating performances by the club’s athletes. In the Senior Girls grade, Laura Cunningham (Pres Athenry) put in a fantastic series of jumps to clear 1.61m on her first attempt to win the high jump. Next event up was the 60m hurdles where Laura was leading the race as she crossed the final hurdle but disaster struck as her trailing leg just caught the hurdle and brought her down in a heavy fall. Laura bravely got up and crossed the line in a time of 12.85 losing over 400 points as a result of the fall.

But despite bad grazing on elbows and knees, the undeterred Laura leaped 4.76m to take valuable points in the long jump and move into 3rd place and followed it up with an 8.08m PB with the 4kg shot to hold 3rd place going into the final event 800m. With a margin of just 43 points separating 3rd from 4th which equates to a gap of just 4 seconds in the 800m, it was all to play for in the final event. With a time of 3 minutes from the Connacht championships Laura ran an exceptionally well-paced race to better this time by 11 seconds when running 2:49.24 and in the process, seal the bronze medal – an incredible performance considering the heavy tumble she took in the hurdles which possibly denied her the gold medal.

Also putting in a series of brilliant performances, Ben Garrard (Yeats College) put himself in contention for a podium finish when running an impressive 9.47 in the hurdles and 24.70 in the 200m, leaping 5.68m in the long jump and heaving the shot out to 8.66m. This placed Ben 4th going into the 800m 157 points adrift of 3rd place or approximately a 10 second gap to recover in the 800m. Ben put in a remarkable run to open a substantial gap on his opponents, blazing around the first 400m in 60 seconds and finishing in an excellent time of 2.02.93.

As we waited with bated breath by the scoreboard for the official results and updated scores, the official arrived with the sheet and alas despite such an outstanding 800m, Ben hadn’t close the gap to 3rd place who had recorded a time of 2.09.37 – Ben would have needed him to run 2.12.56 to have overhauled him. So close but an excellent effort from Ben … a 2.02.93 off very little 800 training in the last 4 months augurs very well for the future.

Also in action in the younger age groups, Ellie Cronin (Pres), Freya Bohan (Pres) and Alisha Larkin (St Raphael’s) battled hard in the Junior Girls and Chloe Farragher (St Brigid’s) in the Minor Girls. Ellie ran a brilliant hurdles despite a wobbly start and recorded an excellent 9.92. The long jump didn’t go as well for Ellie and a break on the first jump was followed up with a 3.73m from behind the board and the third jump was a narrow break – unlucky for Ellie. Her high jump went well with a first time clearance of 1.51m to finish 2nd in that event and she followed this up with a 6.93m shot putt. Freya battled hard also with an 11.60 hurdles, 4.53 long jump and 1.36m high jump while Alisha did well also in her first multi-events with an 11.37 hurdles, 5.55m shot, 4.32m long jump, 1.27m high jump and 2.59.42 800m. In the minor grade, Chloe raced to 11.60 over the hurdles, 7.37m in the shot and 1.21m in the high jump.