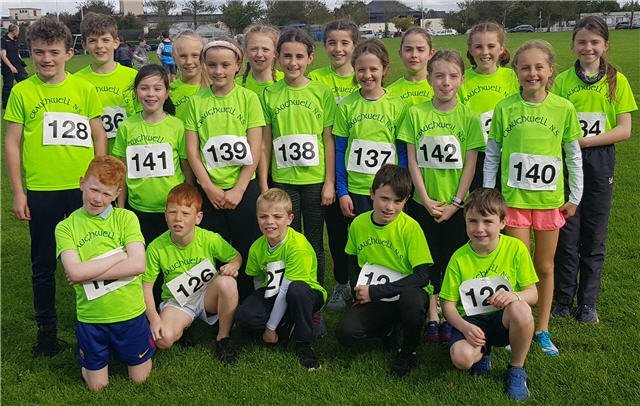 The Galway Primary Schools Cross Country finals took place last Tuesday in Renmore with some fantastic performances by athletes from the club and half of the medal winning teams featuring athletes from the club with Oranmore taking 2 Galway team titles, Ballymana 1 team title, Craughwell 1 team silver and 1 team bronze and Carrabane 1 team silver.

Oranmore Boys School led the way with super team victories in both the 3/4th class boys race and the 5/6th class boys race, continuing a fine tradition for the school who have been 1 of the top cross country primary schools in Galway over the last 20 years. In the 3/4th class race, Stephen Joyce put in a commanding performance to take the individual victory and lead his team to glory with David Casserly 3rd, Aaron Hanrahan 22nd, Ojay Emihian 29th, Patrick McGrath 59th and Sean Cleare 66th. Later their older schoolmates put in an equally convincing performance to take the senior boys title with Stephen Ruane leading the way with a fine 8th place followed by Stephen Caulfield 15th, Daniel Gilbert 28th, Sean Martyn 36th, Liam O’Donnell 62nd and Daithi McCearra 79th.

Full results of the finals are here and of the semi-finals a week earlier here. The top 3 teams and the top 15 individuals from the finals proceed to the Connacht finals which will be held at noon on Sunday 13th October on the grounds of Moyne Community School in Longford. Best of luck to all of the athletes from the club and local schools who are taking part!