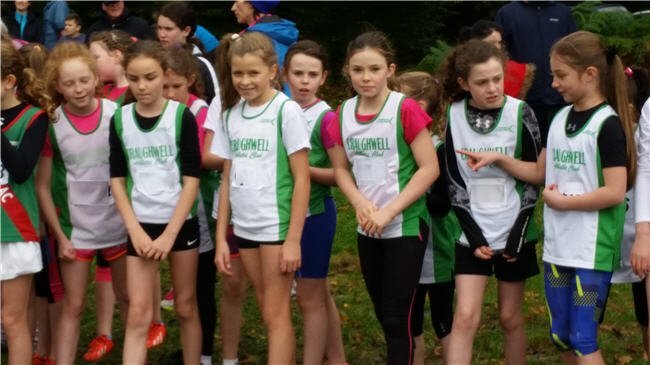 A hardy contingent of athletes made the long journey to Boyle for the second day of the Connacht Cross-country Championships with some exceptional performances. Having struggled to field complete teams on the first day of the Championships 2 weeks ago, we more than made up for that today with 6 teams in action who took home 3 Connacht team titles and 2 silvers between them.

In the first race of the day, Aoibhe Carr had an exceptional run to take individual silver in the U11 Girls 1500m and was followed closely by Jade Moorhead 9th, Clodagh O’Meara 15th, Sadhbh Irwin 26th, Anna Cotter 33rd, Katie Scully 37th, Erin Doyle 40th, Fauve Aylmer 53rd, Nicole Clarke 58th, Holly O’Boyle 63rd and Isabelle Fitzgerald 78th. The strong performance took the gold medals in the team event with a score of 52, the club’s first time in a number of years doing so in this grade. The U11 boys were equally impressive with Evan Hallinan taking a splendid individual silver medal followed closely by Cian Lavan in 5th place, Mathys Bocquet 21st, Evan Moran 22nd and Aaron Doyle 35th – a performance which took the team silver with a fine score of 50 points.

In the U13 girls 2500m, the Craughwell team took 6th place with Ellie Cronin 33rd, Lauren McNally 37th, Asia Clarke 38th, Aoife Kelly 44th, Emma Jane Moran 51st and Ciara Hughes 54th, while the U13 boys took an excellent silver team medal with 42 points in their 2500m with Sean Cotter 3rd, Gavin Lee 10th, Sam O’Neill 14th, Liam Leen 15th despite a heavy fall and Pascal Walsh 36th. Catherine Noonan was our sole competitor in the U15 Girls 2500m where she had a fantastic run to place 19th and 5th Galway girl home – going from strength to strength in every race.

The U15 boys ran strongly to take the Connacht title with a score of 61 points led home by Ben Ryan in 7th place and followed by Patrick Noonan 11th, William Fitzgerald 19th and Cathal Walshe 24th. The U17 girls repeated this performance in their 4k when taking the Connacht title with a score of 53 points narrowly ahead of Athenry and Sligo. Caron Ryan led the team home in 2nd place followed by Dearbhaile Walshe 13th, Sineád Kennedy 17th and Aoife Greene 21st. Ciara Greene battled hard in the Juniro Women’s 4000m to take the individual bronze medal.

Meanwhile in the senior categories, Peter O’Sullivan ran strongly to take 2nd place and in the process clinch the overall Connacht senior title over the 3 days of competition. Rob Hogan placed 13th on the day, a performance that was good enough to take the silver medal in the Novice category over the 3 days of the competition.