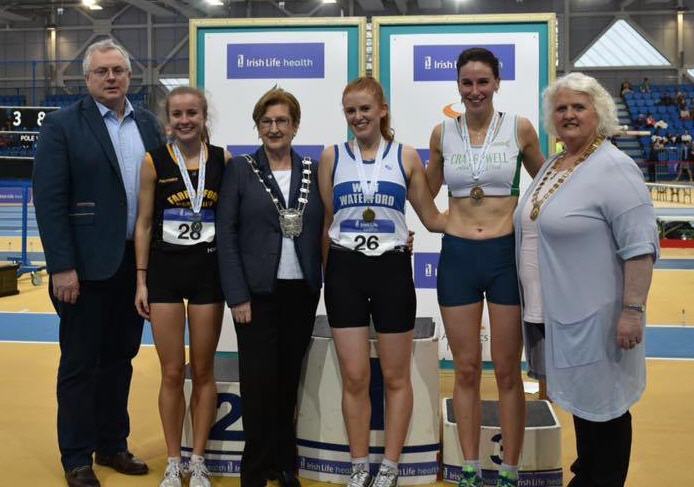 Massive congratulations to Maeve Curley on winning the bronze medal in yesterday’s National Senior 3k race walk at the National Indoor Championships in Abbotstown. Maeve was one of the most successful juvenile athletes in the club winning many National medals in race walk and representing Ireland on a number of occasions. The last couple of years have been relatively quiet for Maeve on the competitve front, wth a year out of the sport in 2016 and intermittent injuries in 2014/15 although Maeve still competed at a high level winning silver in the National senior championships in 2015 and indoor and outdoor Universities track & field titles in 2015.

So its wonderful to see Maeve back competing and achieving at the highest level of senior competition in Ireland. Maeve placed 3rd in a time of 14.18.26 just 12 seconds off the pace of the top 2 – former world youth champion Kate Veale of West Waterford and Farranfore’s Emma Prendiville. Maeve’s podium place follows a similar placing a week earlier in the Universities Track & Field finals where she won bronze in the 1500m race walk in a time of 6.45.14.

Well done Maeve! And well done also to Ballinasloe’s Veronica Burke who placed 4th in the same race in a close finish.