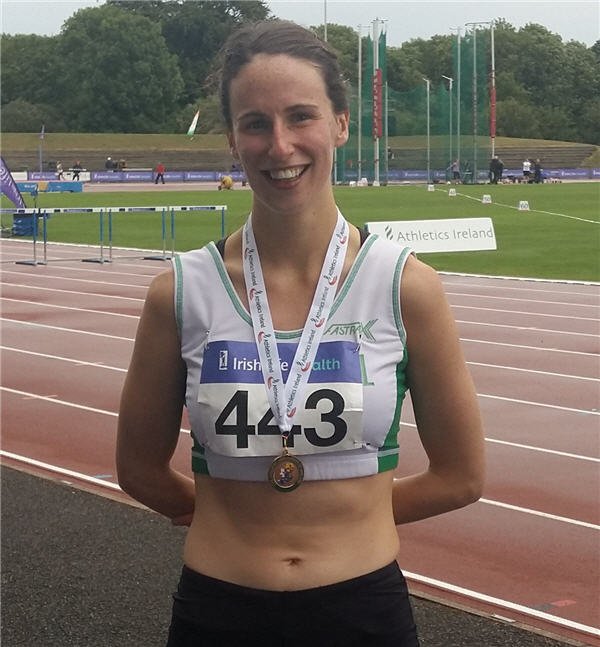 Maeve Curley raced to the bronze medal in the 5000m race walk at the National Senior Track & Field Championships yesterday in Santry. Maeve completed the grueling 12.5 laps of the track in an excellent 26.11.30 despite being penalised with a 30 second time penalty due to an infringement on the final lap. In new rules for race walking, some rule violations that used to result in yellow cards now result in time penalties. It meant Maeve had an anxious wait at the end of the race to get the official results and confirmation of her placing.

This is Maeve’s fourth time on the podium at the National senior championships having won silver in 2015 and bronze in 2012 as well as indoor bronze in 2017. It brings to 28 the number of National medals won by athletes from the club in the outdoor track and field chammpionships this year, the clubs most successful year by a distance with the previous bests being 2015 and 2014 where the club won 20 and 22 National medals.

Also in action in Santry, Sinead Treacy raced to a splendid PB and new club record of 57.99, knocking over a second off her own previous club record of 59.31 and just missing out on making the final. Gavin Cooney completed the action from the club with a fine 2.00.40 in the heats of the men’s 800m. With sub-2 being the target, Gavin went though 200m in 28 seconds pacing his own race very well as the race leaders went off at a crazy 1.48 pace. The sub-2 looked to be on but a strong head-win blowing down the home straight made it very difficult and Gavin finished strongly in 2.00.40 and a new PB which would certainly have been a sub-2 in better weather conditions. His time placed him 19th out of the 30 competitors in action across the 3 heats, a very strong performance in difficult weather conditions.