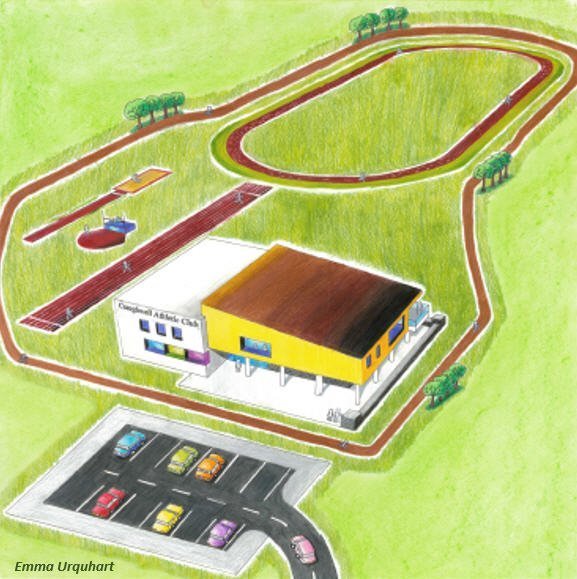 I phoned Michael Tobin last Thursday week on the off chance he might take Sinead for a long jump session some time before the National league finals on Sunday. I knew the season was officially over but I knew he wouldn’t mind me asking. I thought he might be at the races but guess where he was when he answered …. training secondary school athletes for the schools multi events which take place next September !!

This reminded me of an incident a couple of months ago when I met Michael walking the field Nobody else around just himself and the field !!

Ok no surprise there but what was he doing?

He was simply checking if the grass was cut to mark out the new running loops. Clearly it was !!

But rather than stopping at the gate he commenced walking, not one loop but each and every loop. That’s our Michael.

As he started to walk we said hello. He asked if I was in a rush and for once I wasn’t so I strolled along and just listened.

He spoke and painted the dream with the same passion he had the first time I met him, 12 years ago. Talking about the tartan track, indoor high jump facilities, long jumps , phase 1 , phase 2 …

As we walked I glanced across the field to Craughwell Hall where many a winter night was spent with a hall full of kids – running, jumping , relay practice , circuits. We soon outgrow the hall and the club started using the school car park and in time the adjoining field. This was in turn transformed to the astro as we know it today. How far we have come
Now a typically night sees 100’s of kids, enjoying themselves in a sporting environment that is unique to athletics.

Unique because where else do you find boys and girls from 6 to 20 years old , being active and being encouraged to reach their potential .Where it is not all about winning and competition but taken part . No distinction made on ability. Where international athletes train side by side with their friends and neighbours, encouraging and inspiring each other.

Unique because there are no parish boundaries. The children make a new circle of friends, friendships that are built on as children move from national school to secondary level. There is nothing more enjoyable than seeing athletes compete against each other on the hurling /camogie field and then training and laughing together the next night at athletics, all based on respect. Children seldom have to chose athletics over other sports but you sure can pick out the Craughwell athletes on any playing field !!

Never a cross word or discerning voice but continuous banter and respect between the coaches and children. All, athletes and coaches alike, having fun. Priceless !

Now it is time for athletes past and present, their parents and the community to help make the dream. Michael and the executive can’t be expected to do it all. Mind you they will but they shouldn’t have to !

In late August we will be called on to get involve as we get closer to the fund raising day in Dangan for the Guinness Book of records challenge. You will be asked to help, organise, knock on doors and participate. Please don’t hesitate to get involved or leave it to someone else

If we all work together with the same commitment that makes our club so successful then this will be no burden on anyone. Working as a team we should raise double the amount that what Michael expects and more.  Yes, there is nothing worse than asking for money but it’s surprising how many people are only too glad to support their own and wish to acknowledge the hard work of all involved in the club.

Everyone is aware of what Craughwell AC represents and why not give them the opportunity to show their appreciation.

So PLEASE take the first step and answer the call and take on the challenge.

Imagine a full athletics facility on your door step. It will be some achievement. What a legacy!

PS I was back at the field again the following Friday and guess who I met? Yes, he was there, training the next generation, getting them ready for the community games. I don’t think I need to say anymore.