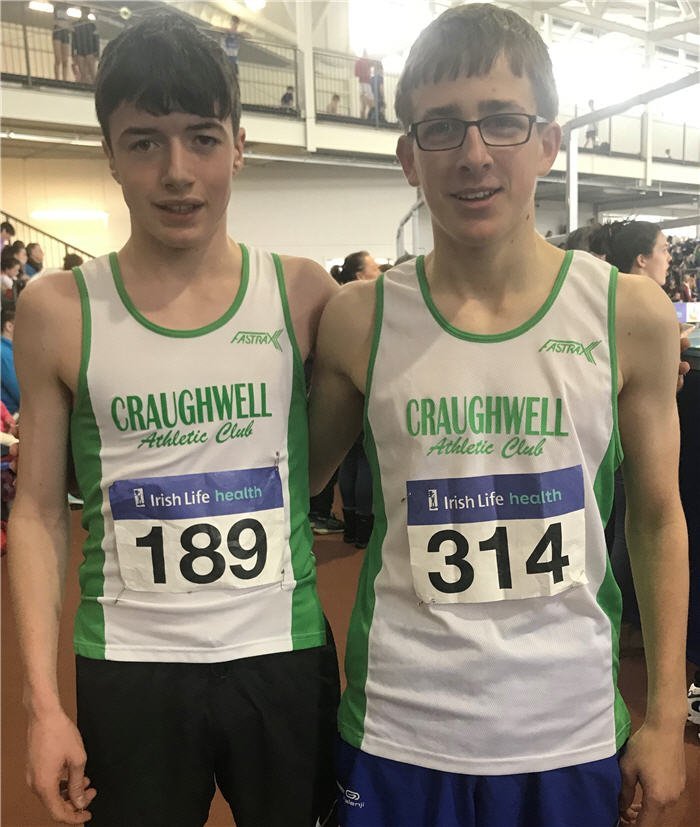 Another marvellous day of athletics in Athlone IT saw athletes from the club take home 5 medals from day 1 of the National Indoor Track & Field.

First into action Laura Cunningham, Lorraine Delaney and Shauna Tobin in their last year of indoor juvenile competition in the U19 Girls long jump where Laura leaped am impressive 4.87 to take the bronze medal in a tight competition having held 2nd place for 5 rounds and just slipping into 3rd by 4cm on the final round of jumps. Lorraine took 5th place with a best of 4.68 and Shauna placed 10th with a best of 4.13.

The U19 Boys long jump was up immediately next where Jerry Keary switched disciplines from his usual high jump. Having struggled with his mark on all of the first 5 jumps, Jerry was placed 4th going into the final round with a best of 5.92m but pulled a massive jump out of the bag to clear 6.38m in the final round and move into the lead – but was immediately pushed back to 2nd place by a 6.39m leap from the Waterford athlete who won the event. Nevertheless, Jerry was overjoyed – a big PB and also a new club senior record. 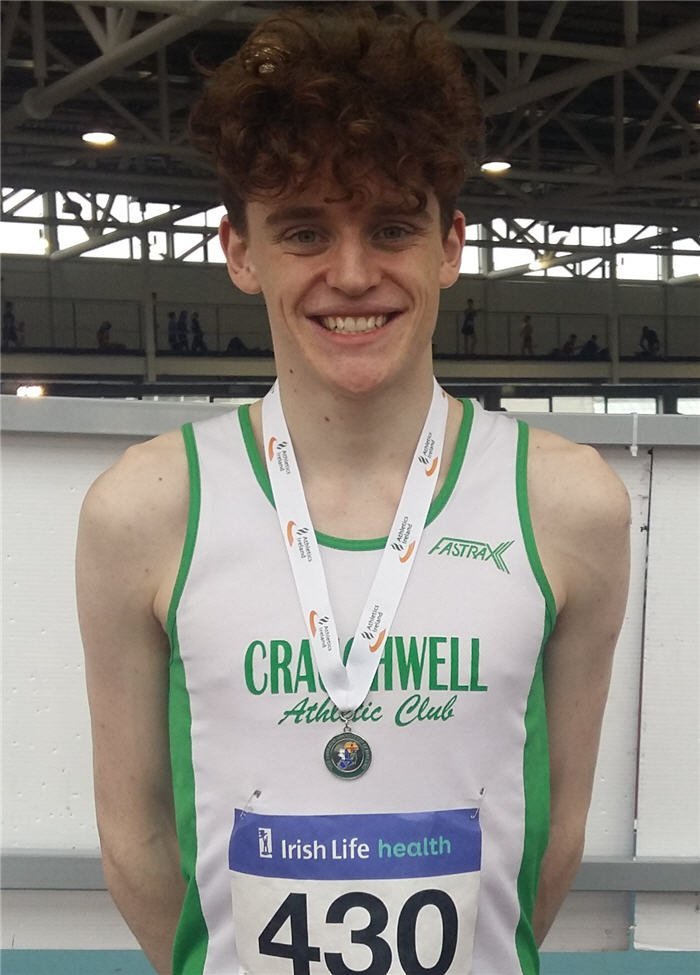 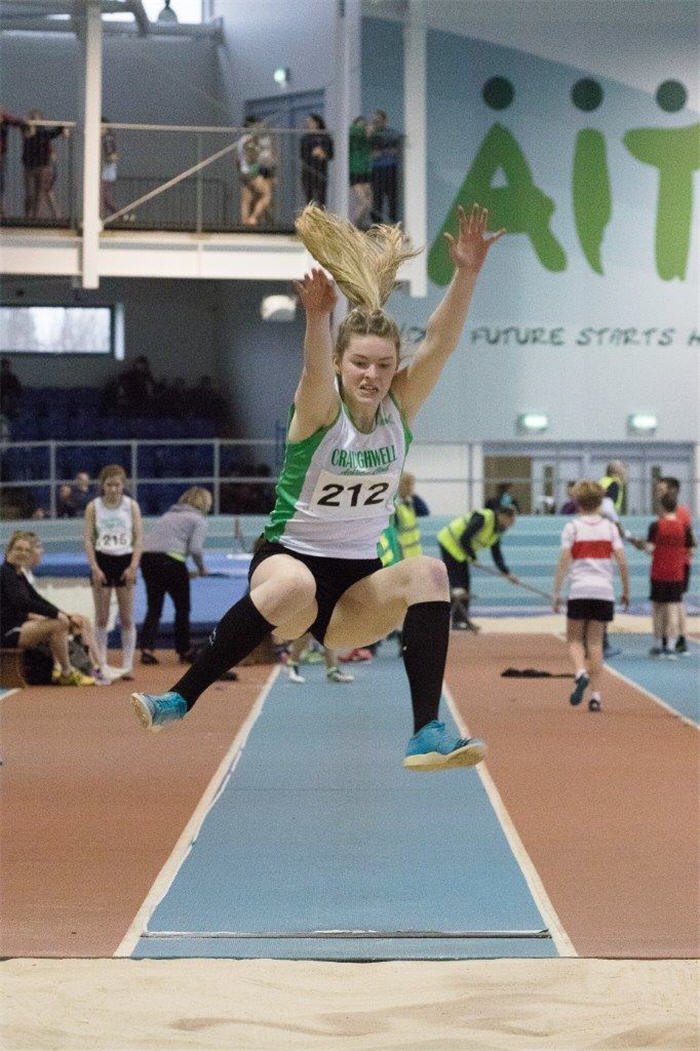 And while the long jumps were in progress, both Evan Hallinan and Niamh Duffy were in action in the U14 Boys High Jump and U13 Girls Shot Putt. Evan strung together a sublime sequence of jumps to clear 1.40, 1.45, 1.48, 1.51 and 1.54 all on his first attempt to take yet another National crown, his third Irish title. While in the same event, Calvin Ryan had a massive 10cm PB when clearing 1.40m to place 11th and it won’t be long before Calvin is threatening similar heights to Evan.

The medals continued to swiftly flow with a huge throw of 9.97m by Niamh Duffy in round 3 of the U13 Girls Shot Putt to move into the lead and only denied the gold medal when the second-placed athlete threw 10.62m in the final round – leaving Niamh with a fantastic silver to add to her outdoor silver and indoor bronze from last year.

And the club’s magnificent morning continued at pace with Jade Moorhead in the U14 Girls High Jump where she further enhanced the club’s ever-growing reputation in the jumps with an impressive 1.45m to take the silver medal. In a high-quality event, Jade leaped cleanly with no faults over 1.30, 1.35, 1.40 and 1.45. With 10 competitors still left with the bar at 1.50, it was possibly the highest standard of high jump ever in this age group. All except 1 athlete found the 1.50 a bar too high on this occasion but Jade’s clean record up to that point stood to her and she was the only 1 of 9 girls who cleared 1.45 not to have knocked any bar and took a well-deserved silver medal. 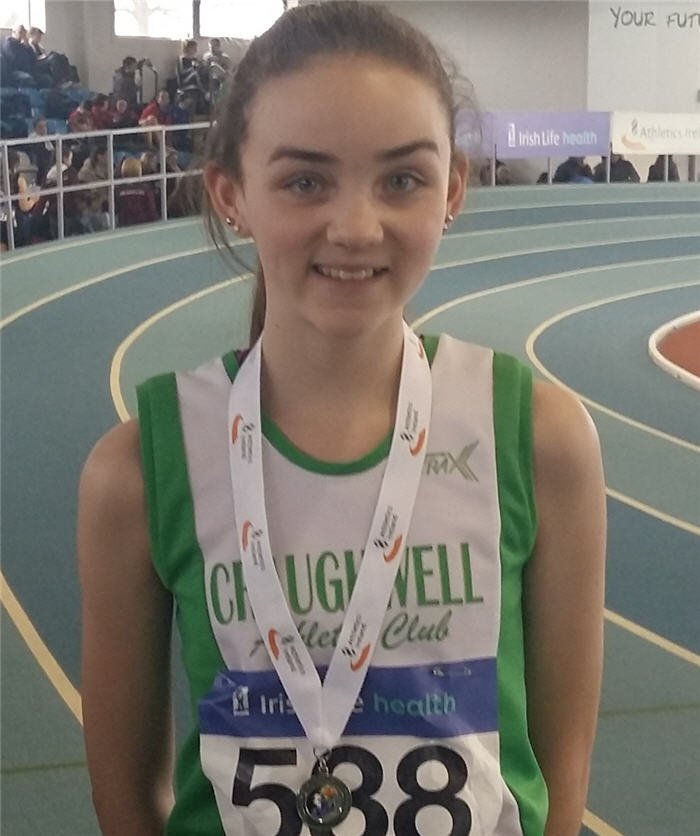 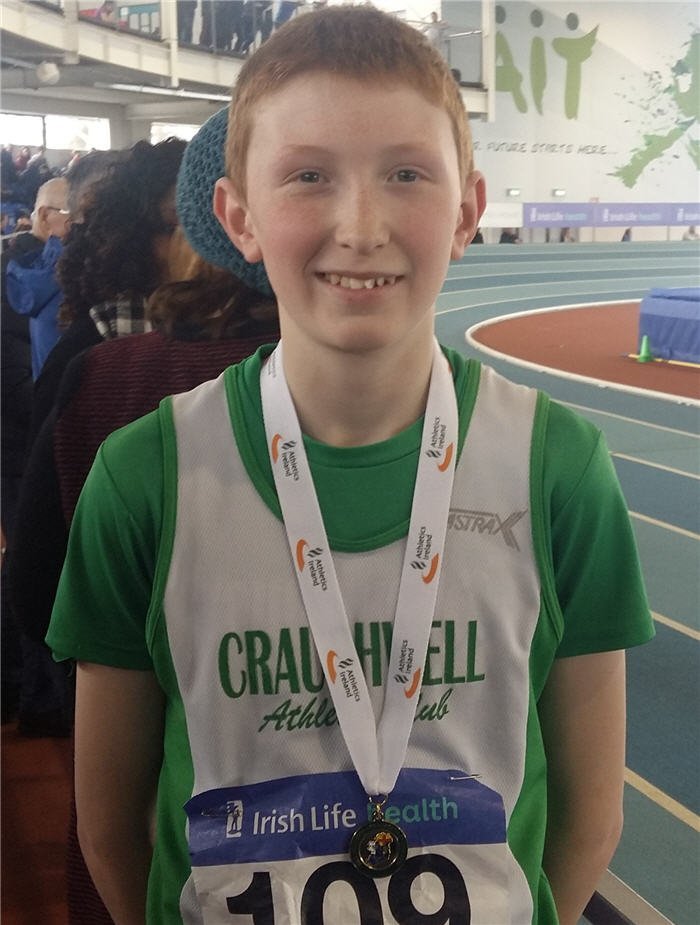 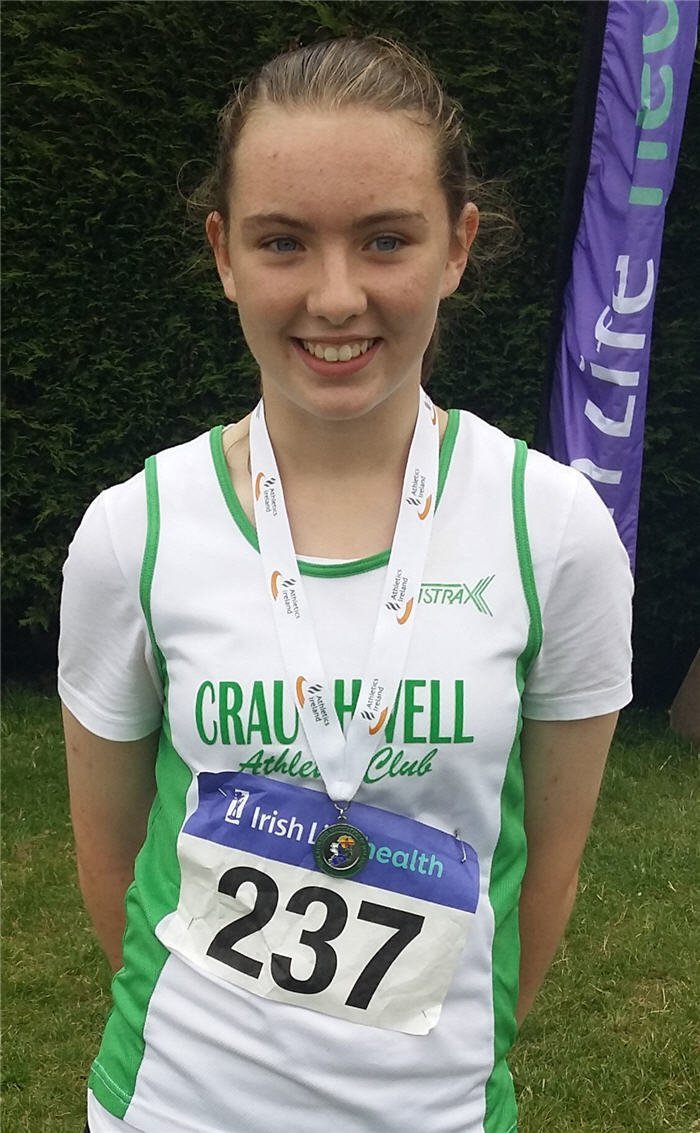 Lukas Schukat came very close to the podium with a 1.60m leap in the U15 Boys High Jump, just missing the 1.65m by a whisker when clipping it with his heels and place 4th with 1.65 taking both silver and bronze. Saoirse Moore had a tremendous performance in the U15 Girls High Jump clearing a PB of 1.50m to equal the bronze medal-winning height but place 6th overall on countback of knocked bars, with Saoirse Pierce in 8th place with a leap of 1.45m. Darragh Kelly placed 8th in the U12 Boys High Jump unlucky to exit at 1.20m but experience that will really stand to the Connacht Champion in the months and years ahead. . Isabella Fitzgerald and Siobhan Carr placed 9th and 11th in the U13 Girls High Jump with bests of 1.30m and 1.20m and both showing great promise in this event. Siona Lawless was unlucky to break her first 2 jumps in the U18 Girls Long Jump and had to settle for 10th place with a safe final jump of 4.34m, while Gavin Keenan took 15th place in the U13 Boys Shot Putt with a best of 6.01m. 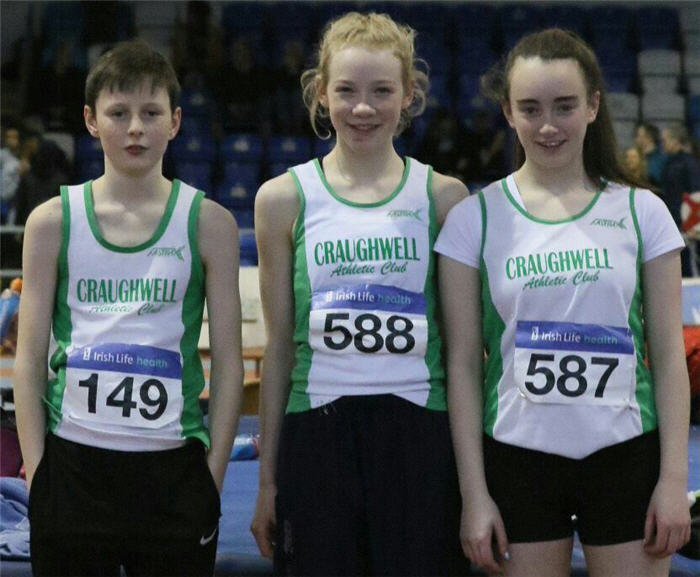 On the track, Sean Cotter put in an exceptionally brave run in the U16 Boys 1500m and was leading the race from the 3rd lap to the final lap and was just pipped for a podium spot on the line to place 4th in a time of 4:20.58, just a quarter of a second from bronze and just over 1 second from gold. A massive race from Sean and exceptionally encouraging as endurance was always his strength but he has developed the speed to go with it and almost did enough on the final 200m to clinch a medal. 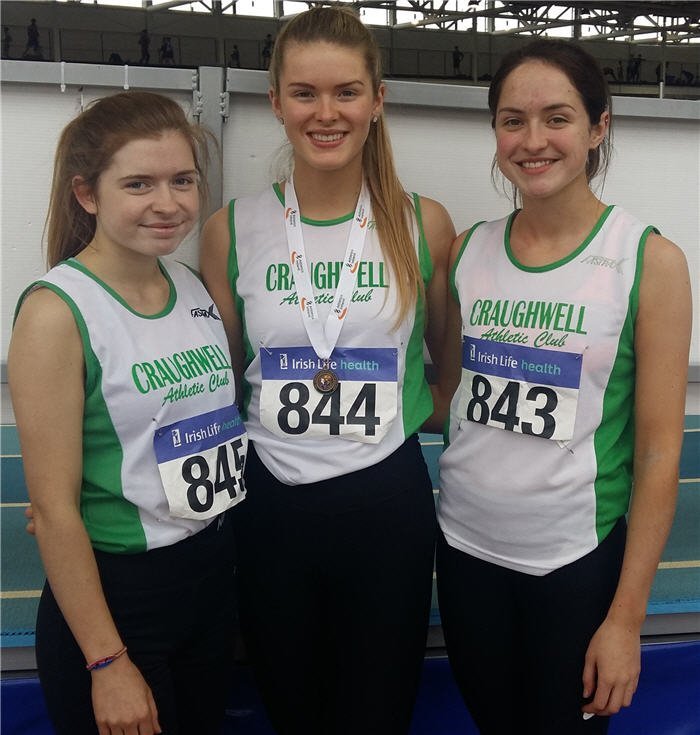 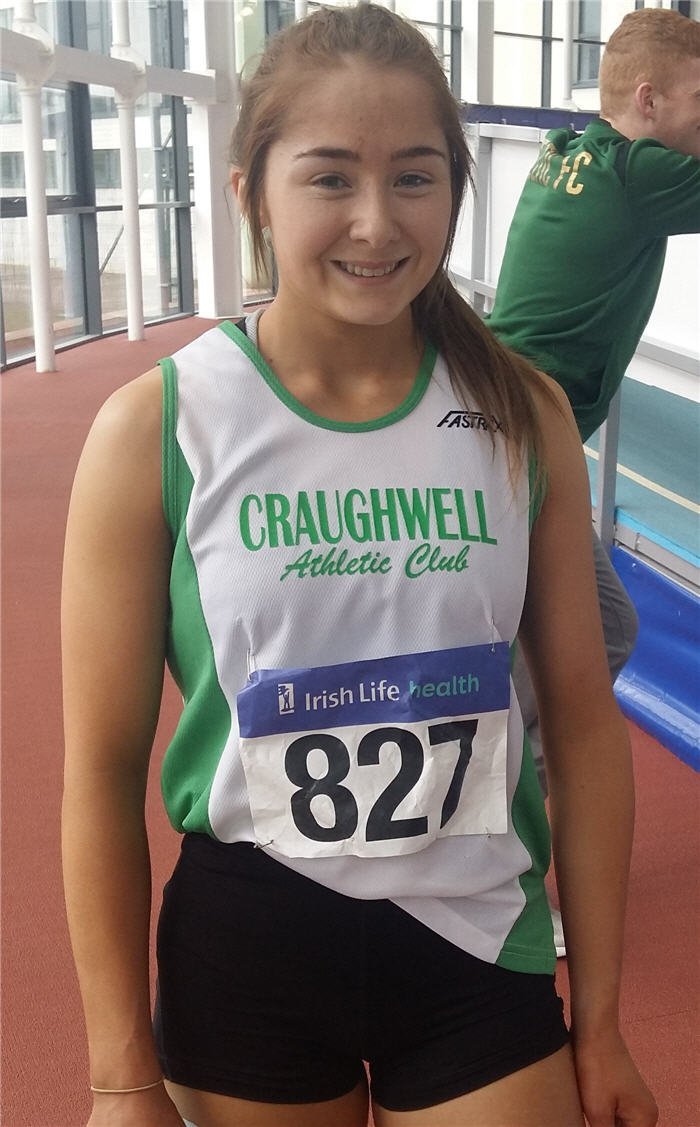 Shauna Tobin (10th), Laura Cunningham (3rd) and Lorraine Delaney (5th) in the U19 Girls Long Jump
and Arlene Earls who placed 5th in U19 Girls 400m at the National Indoor Championships in Athlone

Overall the club’s haul of 5 medals place them as 4th most successful club in the country, an impressive statistic for a club with a rural base.