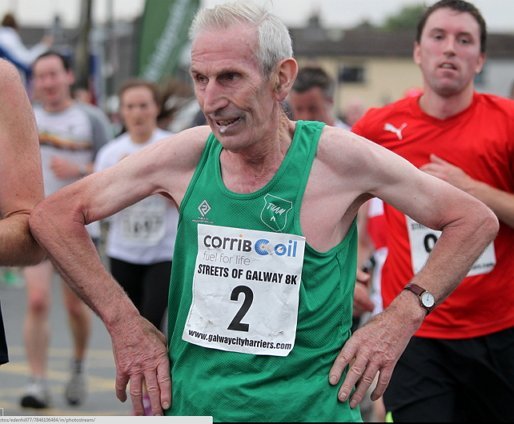 Anyone that has been involved in athletics in Galway over the past years will know the name of the popular Roger Rushe of Tuam AC.  Roger is a modest guy and a fantastic athlete that has been competing at the highest levels or road, track and cross country for over 50 years.  In a story inspirational to all he has felt that he was “finished” this last year, suffering with a bad back injury, however he came back strong this year to win the M70 cross country in style, running away from his opponents by over a minute.  Well done Roger – more details on Tuam AC.com.  I’d really be interested in a profile of Roger’s career – anyone care to do the research and write up one.. Brendan :)?

(The galway vets team did well in reportedly horrible conditions – congrats to Peter who finished 8th and won a Medal in the M35s, not sure that the colour of the medal is decided yet as there was some mess up with the results apparently.)

The above photo was taken by John O’Connor.