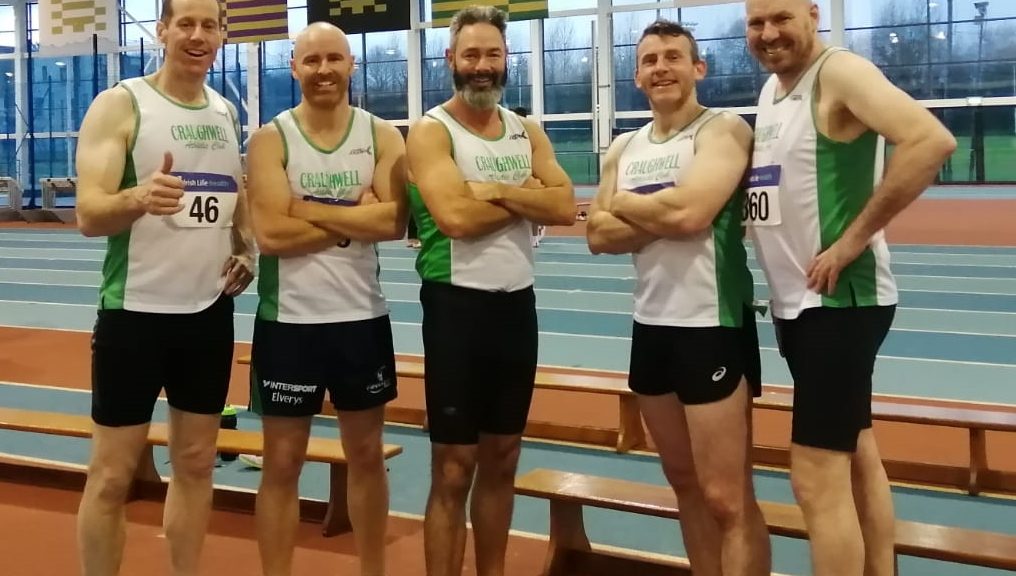 It was a great day out for Craughwell AC’s Master athletes as they took to the track in TUS Athlone.

First up was the 60m sprint. Ronnie Warde ran a blistering race and took home the Gold medal in a brilliant time of 7.45. Ronnie was followed closely by Cormac Kearney who was only 2 hundredths of second off his PB with a time of 7.57 and John Walkin who ran great race finishing with a fine 8.01 placing the lads in 4th and 7th place respectively. Next up in the 60m in the M50 category was Evan Morgan ran a spirited race and brought home the Bronze medal!!

After a break, the lads took to the track again in the 200m sprint. First up in the M35 category was David Mulligan who despite an early stumble out of the blocks ran a brilliant race recovering to bring home the Bronze medal. Next up was the M40’s and in the first heat Ronnie Warde ran a fantastic race against some stiff competition to bring home a Bronze medal. In the following heat, John Walkin ran what was the race of the day. John ran a tactically superb race and finished the 200m with a perfectly timed lean at the finish line to win the heat but narrowly missed out on the medals by a few tenths of a second!

Back in the field events, Justin Lane was competing in the WFD (Weight for Distance). Justin threw weight a mighty 5 metres which clinched him the Bronze medal and is a new club record. To win this, he had to beat some fairly strong looking lads – see below!

The final individual event of the day had Brian Malone running in a stacked M45 400m. Brian had a great start held his pace throughout the full 400m and powered across the finish line setting a new PB with a fantastic time of 57.43 which place him 5th in the M45 category.

The last event of the day was the 4 x 200m Relay. As defending Indoor champions, Craughwell AC had a target on their backs. The first leg of the relay was run by David Mulligan whole ran an amazing leg and handed the baton off to Ronnie Warde comfortably in 2nd place and trailing the lead runner by only a few metres. Ronnie Warde then went on the attack running brilliantly and closed the gap to the lead runner to only a few feet. Ronnie then handed the baton off to Cormac Kearney. Cormac saw the challenge at hand and then flew past the lead runner down the back straight and handed the baton off to Brian Malone giving him about a 10 metre lead over the second place runner. Brian grabbed the baton from Cormac and never looked back cantering across the finish line giving Craughwell AC back to back indoor relay Championships.

At this point in time, the Craughwell AC Masters are the National title holders for the Indoor 4 x 200m Relay, the Outdoor 4 x 100m Relay and the outdoor 4 x 400m Relay. Not bad for a bunch of old men!!!

All in all a very successful day out for Craughwell’s Masters athletes. Well done lads. It’s time to sit back and relax for a few days. On Wednesday, it’s back to training for the Galway and Connacht Indoor championships!!