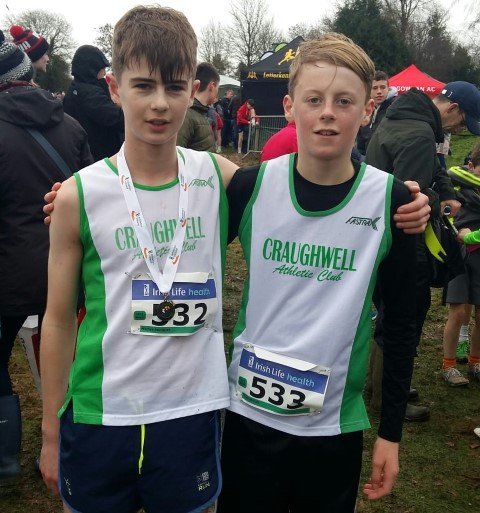 Navan Racecourse provided the stage for the final fixture of a spectacular year for Craughwell AC Cross Country as the All-Ireland Uneven and Novice Championships took place.   The club had athletes in almost every race, undeterred by gloomy forecasts and yellow weather warnings.  As it turned out – the day wasn’t as bad as forecast, and the mud was actually not bad at all – just some patches in the corners to keep things interesting!  It was a tough course however – very twisty and hilly with a long, seemingly never-ending 2km loop.

The standout performance for Craughwell was definitely that of Mathys Bocquet who was Galway’s highest placed finisher on the day claiming a medal-winning 6th in the U13 race.  After exceptional performances in the Galways, Mathys feared that his promising season was dashed when he pulled up with a torn calf muscle 100m into the first Connacht cross country.  He showed great character and resilliance to return via cross training and ultimately easy jogging to get himself back in shape for the all-ireland.  His excellent step-up of a few weeks ago showed promise with a super top-40 finish but it was still all to do.  In the race itself he started hard but not too hard – settling in at 15th position after a Kilometer.  On the second lap, his strength and endurance shone through as he worked his way through the leaders and closed out in a superb 6th place – well done Mathys on a remarkable performance!  His clubmate Sean Liston (150) also had a super race – running hard all the way in this exceptionally high standard field.

Keelan Moorhead was impressive also in the U11 boys 1500m when placed in the leading group for much of the race but picked up a foot injury mid-race and slipped to 38th place – still a fine performance and leading the club to 11th place out of over 20 teams with Stephen Ruane 72nd, Declan O’Connell 78th, Cian Brady 118th, Orrin Gilmore 127th and Jack Farrell 154th. 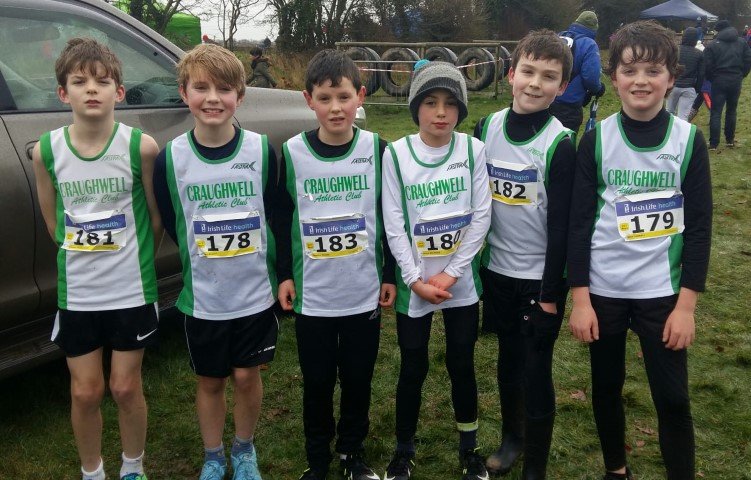 U15 Girls 3500m – Emily and Aoibhinn do themselves proud

For the the 3500m u15 Girls we had two competitors – the fast improving Emily Miskella and the ever tough Aoibhinn Keane.  Multi-talented Emily has shown fantastic application this year at training, mixing the running in with the Camogie and other sports.  In recent weeks as she focused dilligently on her endurance the dividends were obvious in training and it showed clearly on Saturday as she finished well up the field in a fine time.  Aoibhinn made a fantastic start up the long hill well to the front of the field but has been struggling with her hamstring all season and it gave her increasing trouble as the race went on.  She would have bravely run the race to completion, but her Dad wisely chose to step her aside with about a km to go to avoid worsening the injury.

Ross McGuinness, was next up for Craughwell and he had a truly remarkable run.  The Connacht Champion was not to be outdone by his good friend and fellow triathlete Mathys and he really took the race by the scruff of the neck.  Ross pushed quickly into the top 5, then the top 2 then led for a period at the end of the first 1500m lap.  He wisely settled back into second place at the start of the final 2km lap – but it was a precarious position due to the size of the chasing pack.  Ross has tremendous endurance and his running style would probably have suited a faster pace in this section from 1.5km to 3km which would have really thinned out the chasing pack, however the pace settled and group behind the leading two got bigger until the big surge happened with 500m to go and 4 athletes went past Ross, pushing him into 7th place with 300m to go up the long hill finish.  Ross tried to kick to the line but after the repeated late surges his legs just didn’t react as he’d like and he got pipped into 13th place literally by a nose on the line.  Incredibly unlucky and though understandably disappointed to have just missed out on a medal, he can be proud of a sensational run, and a tremendous display of heart, courage and smart running. 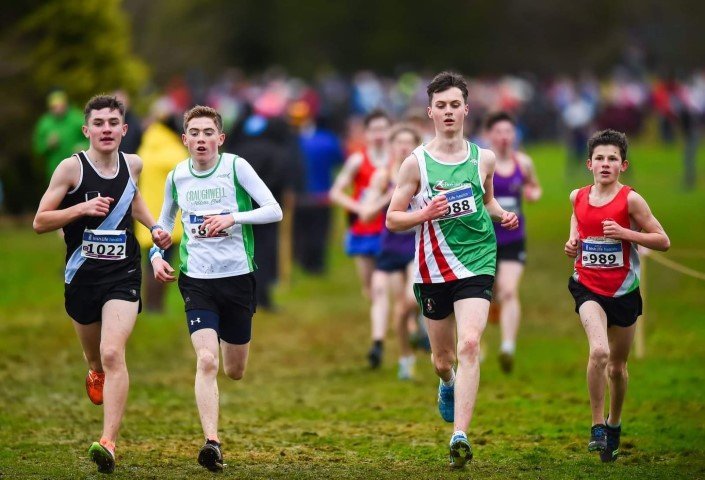 The program quickly moved on to the u17 girls race where Ailbhe had a superb run, winning the coveted award of Craughwell’s leading Miskella of the day by claiming a fine 40th position.  Ailbhe has been improving steadily and consistently all season under the careful guidance of her coach Lisa and this was one of her best ever performances at the highest level of Irish endurance running.   As usual for Ailbhe, she got stronger as the race progressed – however she showed a new string to her bow on Saturday with a fantastic sprint kick up the long uphill finish to fend off attackers and catch some of those ahead of her.  Brilliant run!

Another athlete delivering a season’s best performance at the right time was Kyle Moorehead.  Kyle was as relaxed and strong as I’ve ever seen him – powering through the strong field to finish in 41st position.  I would need to consult with “records-man” Mike, but I think this might be Kyle’s highest ever Cross Country finishing position?  This was a fine run from Kyle and further evidence if it were needed that the hard work and smart training is working for him – well done!

The novices event is the biggest Cross Country races in ireland in terms of the size of field.  This combined with the relatively short 6km distance makes it a hillariously crowded spectacle of running both to watch and take part in.  Craughwell had a really quite strong team of 5 athletes on the day – Piotr Prokop, Damian O’Boyle, Kevin Mooney, Jack Miskella and Mark Davis. 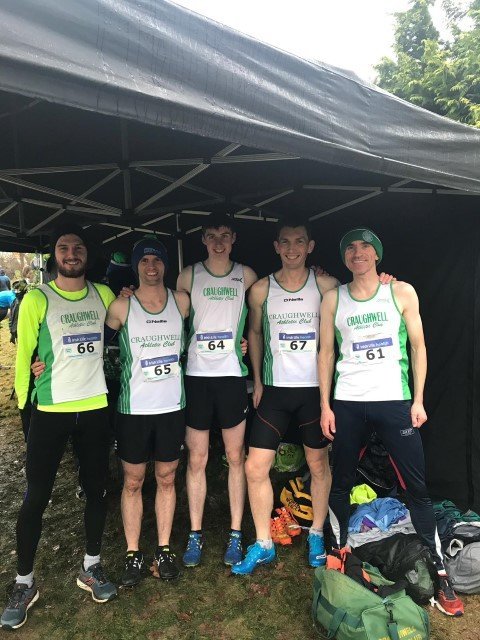 All smiles and clean legs before kick-off

Forget the “Novices” name, the field is always of a high standard and this year was no exception.  In fact..  this was definitely the strongest novices field I have competed in in terms of the amount of decent runners in there – the top 80 are always very good but this one felt like it had strong athletes throughout and combined with the twisty course it made for some interesting and compact racing!  Though the course was mostly firm, on each lap at the muddy corners, runners were falling and getting hurdled by the following hoardes to give a “grand national” feel to the thing.

The race got off with the “cavalry” charge up the 400m uphill start and curved around to the right.  Kevin Mooney was in his second ever cross country race and had vowed to learn from his Ballina race by getting out of the blocks quickly.  As it turned out, Kev had probably learned a little too much as his first km of 3.01 uphill was good enough to get him into the AAI event pictures! 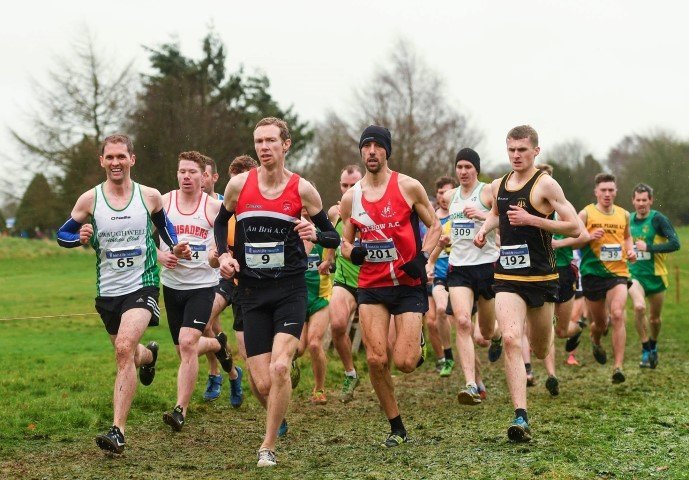 1km Completed! Smile for the Camera!

As the Kilometers rolled past, either the oxygen debt or perhaps the lack of further photo opportunities motivated Kevin to moderate his pace and he settled into a still phenomenal-on-that-course 3:20/km for the remainder of the race.  Behind him the experienced and quick Collegiate Damian O’Boyle ran a clever race, not getting drawn into things at the start and building from the top 60 to eventually pass Kevin and push on to ultimately finish as first Galway man in 31st position.  It was a fine run from Damian who is really in a recovery phase after a hard Cross Season Stateside.  There aren’t too many hills in Tenesee and he’s starting to re-acquiaint himself with them!  Kevin finished close behind Damian in a fine 44th position – more valuable Cross Country experience for our talented club Marathon record holder who has some great days in his future.

Jack Miskella targetted this race and it really showed – the tough NUIG student started out hard and held his pace solidly throughout.  6km is a long way for a man that specializes in the 800m but the training he has done this season really showed and he finished ahead of many people that he had never beaten before – a great sign.  His 91st place finishing position made him the 3rd Craughwell and Galway Athlete, but sadly for him he ended up getting the Miskella “Wooden Spoon” on the day, and his prize was waiting for him at home (hint: a bucket and mop was needed!).  Seriously – it was a great performance, and it’s smashing to think that one family had 3 athletes in different age races at the all Ireland finals.

Next home for 4th Craughwell and 5th Galwayman was Mark Davis (i.e. me).  I went out quite hard but after another year of injury hadn’t enough done really to sustain the pace and could really feel it in the last 4k where people seemed to flood past me.  In the last 500m or so with the end was in sight I kicked pretty well for a respectable 117th place.

Piotr Prokop was taking part in his first national Cross Country and didn’t really know what to expect.  He “sandbagged” at the outset joking that his goal was not to finish last – fat chance!!  Piotr ran magnificently.  He finished well in the top-200, with over 60 finishers behind him (and reportedly about 10 DNFs) – very well done – a fine run, and there’s definitely a lot more in Piotr in years to come if he keeps training like he has been!.

In the end, Craughwell were first Connacht club – 12th club team of 32, and provided 4 of the 6 Galway scorers who made 8th County team – not bad for a day’s work!

After the race, I had to look back with renewed appreciation at Jason Broderick’s fantastic run in Waterford 2015 where he was 3rd man home for a sensational bronze medal in an equally tough field.  When you consider the quality of the guys behind him – some of whom made the top-6 in the sensational recent euro qualifiers at Abbotstown, it was a truly exceptional performance from him – definitely in my mind the finest cross-country run ever by any Senior in a Craughwell Singlet.  If we can get Jason back injury free next year, there’s no telling how far he can go!