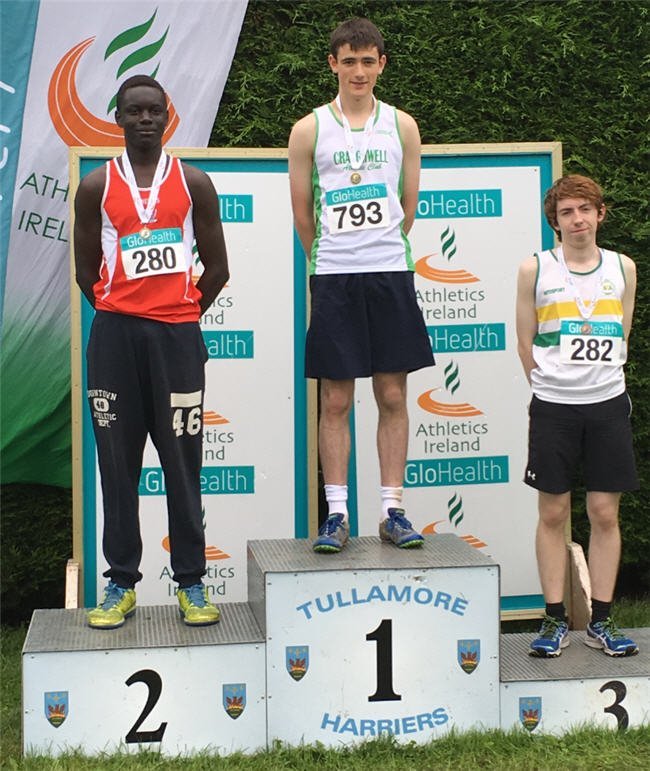 The final day of the National juvenile track & field saw Matthew McKernan close out his career as a juvenile with a fantastic victory in the U19 triple jump with a fine leap of 12.54m. Having won a silver medal in the long jump last weekend, Matthew finished out his season in style with his first gold medal at National level.

Matthew first represented the club as an U13 in 2010 when competing in Bushfield in the Galway Cross Country (of all things Matthew!). But after a brief encounter with cross country running, the horizontal jumps became Matthew’s forte and he steadily progressed in long and triple jump through the years. He first hit the National podium as an U16 in 2013 where he took bronze with a leap of 11.17m in the triple jump, a discipline he had just commenced training for only 8 weeks previously.

Well done Matthew, great to witness the making of a champion in the last 3 years!

Laura Cunningham and Lorraine Delaney followed up on their triple jump success of yesterday with strong performances in the U17 high jump which came very close to the medals. Laura cleared 1.50m on her first attempt and came very close to doing likewise at 1.55m which would have taken the bronze medal. Lorraine came within a hairs breath of clearing 1.55m on her first and third attempts, barely touching the bar with her heels causing it to drop. There was so little contact, one would think it was her shoelace that caught it! In the end, Lorraine placed 9th due to some knocked bars earlier on and Laura was joint 5th – but both encouraged by being so close to the bronze medal which a first time clearance of 1.55m would have won.

Ryan Gallagher placed 5th in the U15 high jump with a clearance of 1.60m, unlucky not to go higher with the wet ground causing him to slip on some of his earlier jumps. Entering the competition at 1.55m, Ryan lost his footing under the bar on his first attempt but bravely battled on to clear the 1.55 and 1.60 and unlucky not to get 1.65. 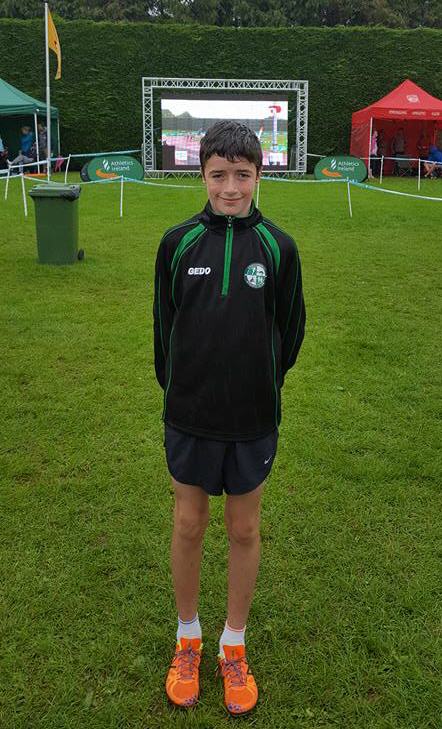 Sean Cotter following his impressive performance in the U14 Boys 1500m

Sean Cotter ran a fine time of 4.55.35 to take 9th place in a high quality U14 1500m race with Caron Ryan also placing 9th in the U18 girls 1500m with a time of 5.06.89 and Finbar McFadden and Ailbhe Miskella racing to 13th and 16th position in their U15 1500m races, slightly down on their PBs from the Galway and Connacht championships. Sean’s performance ranks him number 3 on the club’s all-time times for U14 Boys 1500m while Caron’s performance parachutes her to the top of our U18 performances in 1500m.

Daniel Callanan-Forde ran a good time of 24.82 to place 6th in his heat of the U17 200m to wrap up a very successful Nationals with his double silver in long jump and triple jump.

Well done also to former member of the club Michael Hand who emigrated a few years ago to the Deep South and now competes with Cork club Old Abbey. Michael placed 4th in the U16 javelin.