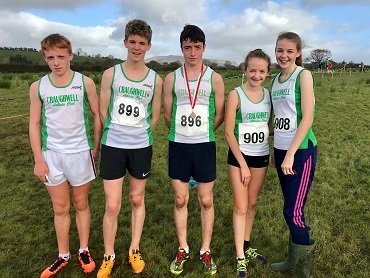 Glorious blue skies, and warm sun greeted runners in Sligo last weekend (Sunday 29th Oct). With magnificent views across the rolling land scape towards the Keelogyboy mountain range and Lough Gill, today was one of the days that the best possible thing you could do is run cross country.

Notwithstanding the fabulous day, those of us who have been to Calry before, know how tough this course is. Running downhill between two adjacent fields through a narrow gap, is hard work for even the best x country runners. There is also a deceptively long incline of 250m that not only has to be climbed every km that is run, but also it makes up the finishing stretch coming up to and into the shoots.

We had Craughwell AC representation for most ages today and lots of fantastic performances. The first race kicked off with the U12 Girls, 2000m race, that consisted of 2 full laps. Running in this race were Claudia McGuiness and Muireann Leen who both had fantastic starts, and joined the leaders for the first 200m, however, the leaders charged ahead and our girls maintained fine positions throughout the race with final positions of 55th (Claudia) and closely behind 57th Murieann.

U12 boys were next to the line and with one of the finest performances of the day Mathys Bocquet in a race with 58 contenders stormed to 2nd place taking an individual silver medal, first Galway boy in and helping the Galway team to a Silver Country medal. Other U12 boys included; Darragh Kelly 11th Galway runner in (placing 46th overall), Eoin Spellman, 12th Galway runner in (49th overall). Much to his disappointment Eamonn Corban picked up an injury into the first lap and had to pull out of the race. 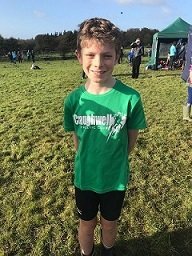 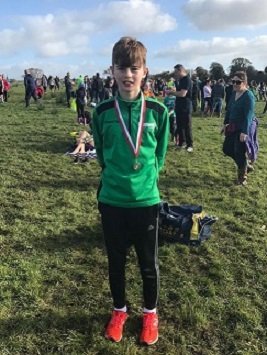 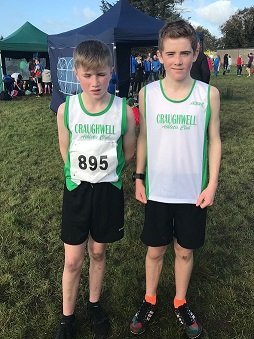 U14 Girls only had one Craughwell runner; Aoibhin Keane who had a great race to finish in 27th position and at the same time brought home a Galway County Gold Medal.

Next to run were the U14 boys (3000m); were Ross McGuiness and Darragh McCartin. Ross charged ahead with 2 other runners who held comfortable leads throughout the first 2k. On the final and exhausting last km, Ross fell back a few places but still managed to finish 6th overall. Ross was the 2nd Galway County runner to cross the finish line. Darragh had a very steady run maintaining throughout the entire race his 16th position. Both boys were exhausted but delighted to have achieved this today. Ross and Darragh both stood on the podium for bronze County Galway medals.

There was little or no time between any of the races today and as soon as U14 races were complete it was straight to the line for the U16 girls. Without rain today, the fields although “muddy” were nothing compared to previous years, and although there had been 4 races completed, under foot conditions were still fine. Craughwell AC had 2 U16 girls; Ailbhe Miskella and Ciara Sheppard. Both girls got off to fantastic starts and Ailbhe in her customary style immediately charged to the front to run alongside the top 10 in this race. With her fabulous ability to maintain her position during races, she sat in and around 9th position for the first 2 laps, Ailbhe’s endurance ability coupled with her power, usually allows her to work her way up to over take a few runners. With 2 laps completed and coming into the third lap, Ailbhe gained a few places and with the last hill to go even managed to close the gap between herself and the 7th place finalist, with only 50m between the two, Ailbhe sprinted up the hill to finish 8th. Ailbhe was the 3rd Galway girl in. Ciara also put in tremendous effort and although preferring to hold back a little at the start of the race, (to avoid the “rampage” that occurs), ran steady first 2 laps and then began her strategy to gradually gain places. With 1km complete Ciara was sitting in 15th position, appearing comfortable and preserving her energy for the second half of the race and gradually she  began to gain places and overtook 5 runners to storm to the finish line with a brilliant 12th position. Ciara was the 5th Galway girl in and both herself and Ailbhe helped the Galway Team to a Gold County Medal

Unfortunately, neither U16 girls or U16 boys were able to field a team in their races, but with fine performances from all individuals Galway County Gold Team medals were achieved. 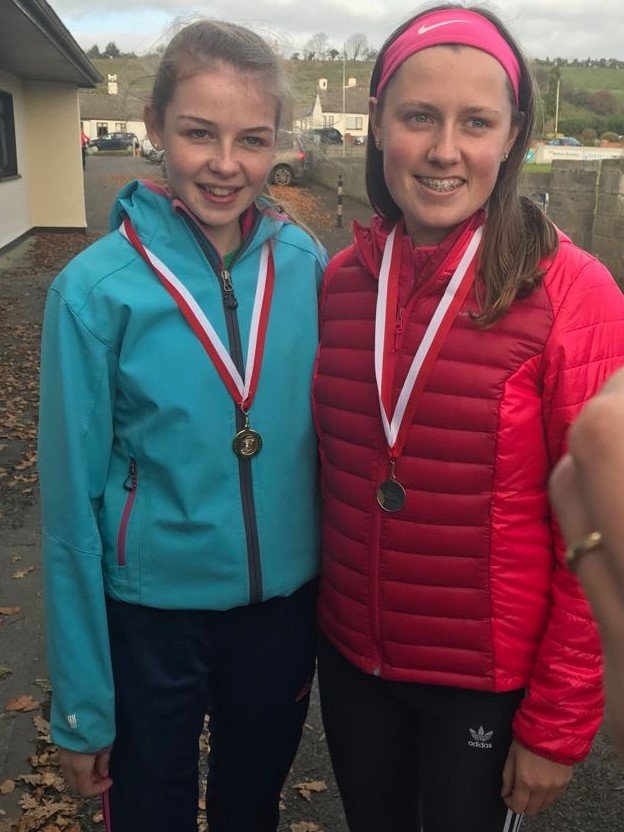 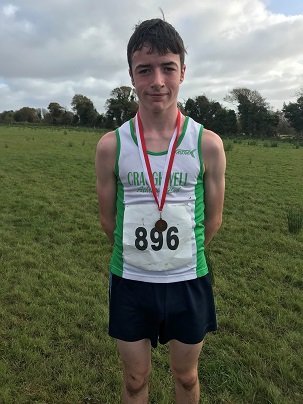 (missing from photo is Ciara Sheppard)

With U16 boys lined up and ready to go with Sean Cotter, Kyle Moorhead and Liam Leen (only recently came back to x country), from the gun start Sean stormed ahead to take an immediate lead. Within the first 100m he was joined side by side by 2 other runners who accompanied him for most of the race. This is a tremendous achievement as Sean is an U15 and particularly as I observed him “hobbling” out of school last Thursday evening, following an injury to his foot. He rested for a few days and somehow managed to charge into the Sligo hills (“bog”) with the determination we are now used to. During this 4000m race Sean held his strong position, fighting off any contenders. However, during the last 1000m he began to fall back to third position and the gap widened and made it very difficult for Sean to fight for first or second place. Sean still managed victory with an individual bronze medal and earned his place on the Galway County Team (Gold Medallists). Next U16 Craughwell runner to charge up the hill towards the tape was Kyle Moorhead, (16th) followed closely behind by Liam Leen. Both runners held their positions throughout the race and Liam Leen (running out of age and with very little training behind him in the last 12 months) coped incredibly well with the steep accents to finish in 20th place.

Dearbhla Walsh, who has taken some time out from running this year to pursue other sports and study put in a fine performance in the 4000m girls U20 and coming around the first lap was in a strong 4th position and was only overtaken by one runner throughout the entire race and finished in 5th place. 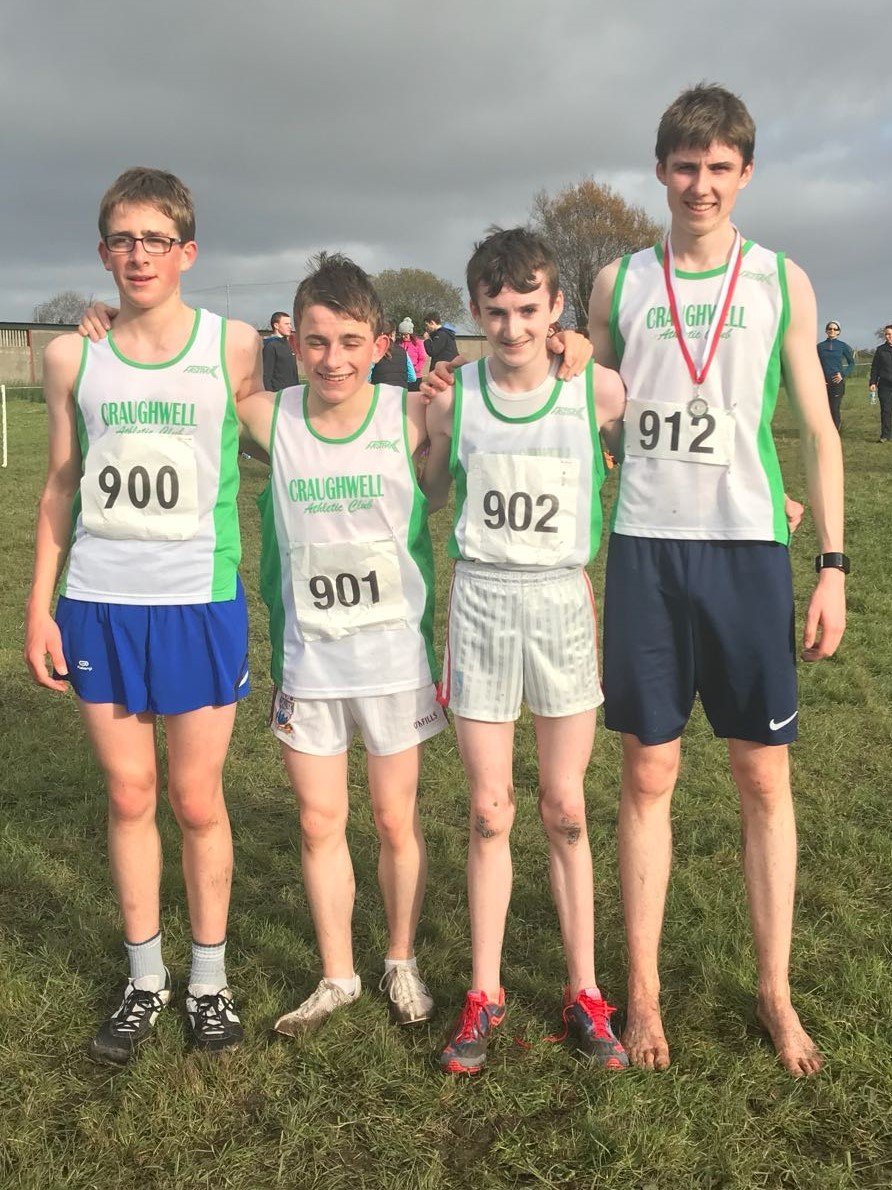 The last and final race of the day was the U18/U20 and men’s race. Although it was great to observe the talent of these endurance runners it was at the same time a “battle field” in terms of the numbers of runners and a real task to work out who was in which age group. Piecing together the results proved incredibly difficult with 81 runners in total. Jack Miskella U20 had a superb race and held his 2nd position throughout the entire race to take home anIndividual Silver Medal. William Fitzgerald was the first U17 Craughwell athlete to cross the finishing line in 5th place followed by Patrick Noonan and Sean Noonan (15th & 18th). All performed incredibly well and their overall race positions (amongst U18-Senior men) were 6th, 18th, and 21st.

U18 boys came away from Sligo with Silver County medals.

Full results of the day are here:- 2017.10.29.amended.ConnachtEvenAgesXCResults.pdf