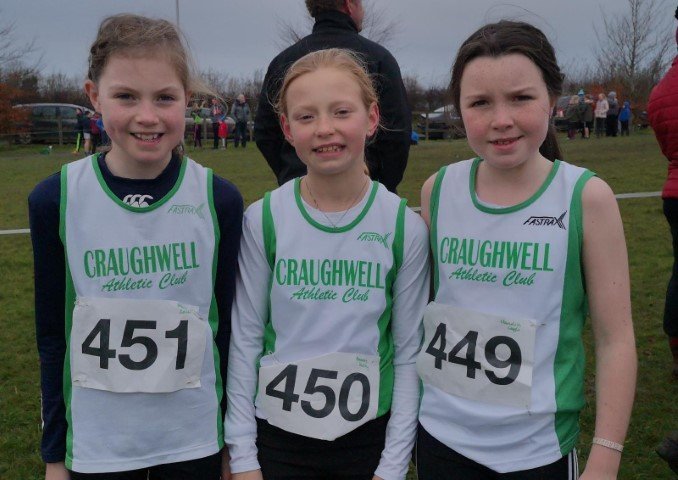 The morning was cold and misty on the road from Galway but as we neared Ballina the sun cracked through to reveal a beautiful Cross Country Course.  Each time I visit Beleek I get a little more envious – with the ample grass, hills, wooded loops, clubhouse and track, it really is a showcase Athletics training facility and is improving all the time – a credit to all concerned.  The event was run splendidly by host club Moy Valley AC and all races went off without a hitch.  The course consisted of one 500m loop and one 1km loop – the larger loop incorporating the famous “Beleek Hill” which is a short sharp stuffing knocker (though not actually as bad as it was “in my day” when it used to go up again through the trees).  The surface was sticky in places but as a whole impressively solid for this time of year!  As the day went on the temperature noticeably dipped and it became bitterly cold for spectators and marshals alike.

We enjoyed another remarkable day as our little village club produced no less than three dominant individual winners in Mathys Bocquet, Sean Cotter and Caron Ryan, several other medals and many wonderful team performances.  More winners than any other club in Connacht – not bad!

Threes company! The u11 girls crew that kicked the day off!

The day kicked off with the u11 Girls – one of the biggest races of the day with over 90 competitors!  Aeveen Kelly (22) was first Craughwell lady home followed by Claudia Coyle (33) and Aisling Lavan in 40th.  Aisling scored on the Silver medal winning Galway team. 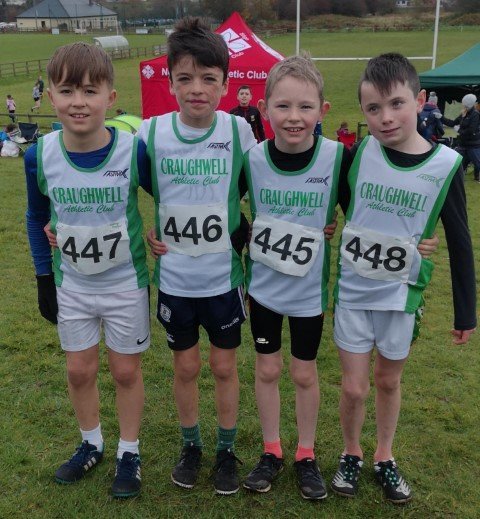 Next up were the u11 boys in what was the biggest race of the day, over 108 finishers!  Craughwell duo Alan Hallinan and Stephen Joyce led club and county home with a stunning 3rd and 4th position, followed by Alan Warde (53rd) and Darragh Higgins (68th).  Craughwell were 5th team in a really tough field and Alan and Stephen were top scorers on the Gold medal winning Galway team. 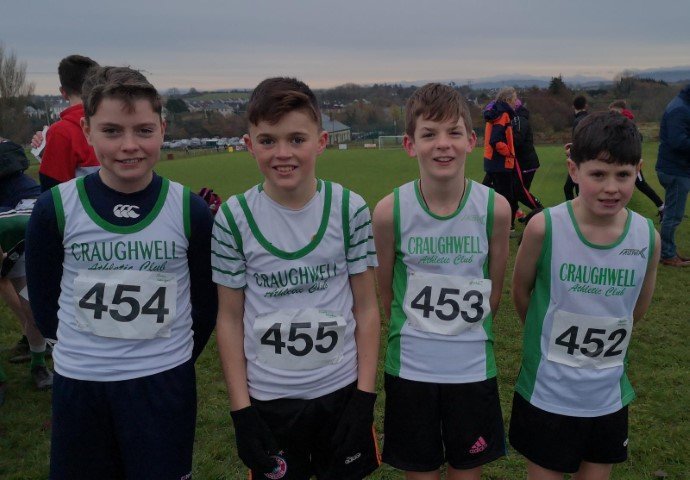 u13 Boys team had a fantastic run!

In the u13 Girls race, Craughwell had a single competitor in Claudia McGuinness who finished a creditable 39th.  The u13 boys had a solid team, led by Keelan Moorehead in 11th, Stephen Ruane in 14th, Fionn Higgins in 18th and Sean Lavan in 39th.  After the points were totted up Craughwell were incredibly unlucky to finish 4th place, on the same points score as the 3rd place team.  Keelan and Stephen did pick up gold medals as scorers on the winning Galway team however. 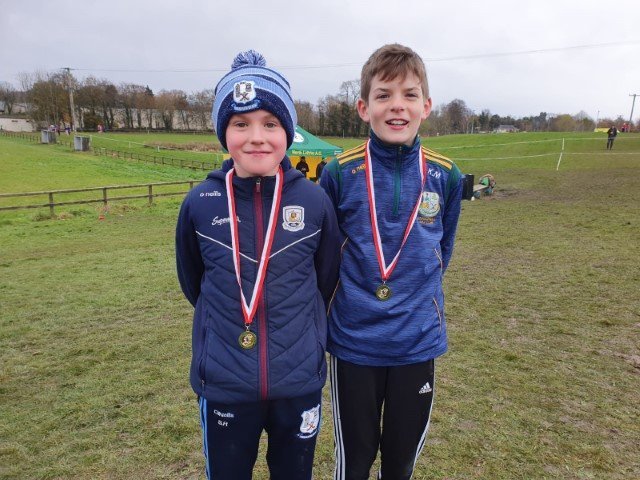 The u15 Girls team were down a lady as Aoibhe Carr was sick, but still won a marvellous Silver with a great team performance in what was a very exciting race.  They were led home by club stalwart Clodagh O’Meara in 13th place, followed by Holly O’Boyle stepping up in 17th place, Anna Cotter in 20th, Leonore Church in 22nd, Siofra Davis 23rd and Allanah Grogan in 24th.  Leonore and Siofra were running off the effects of their all-Ireland Multi-Events the previous day which can’t have been easy! 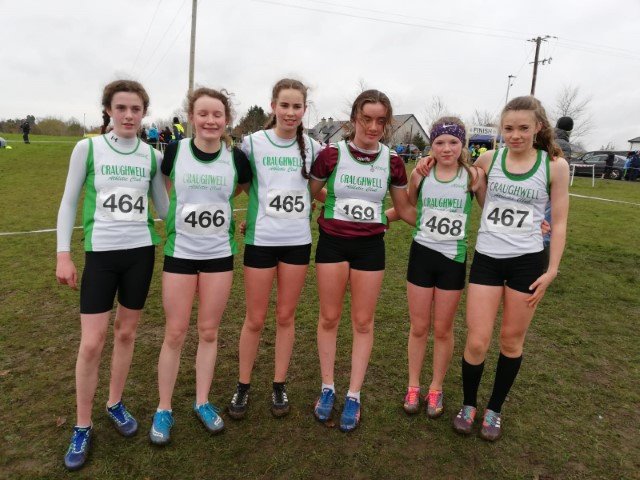 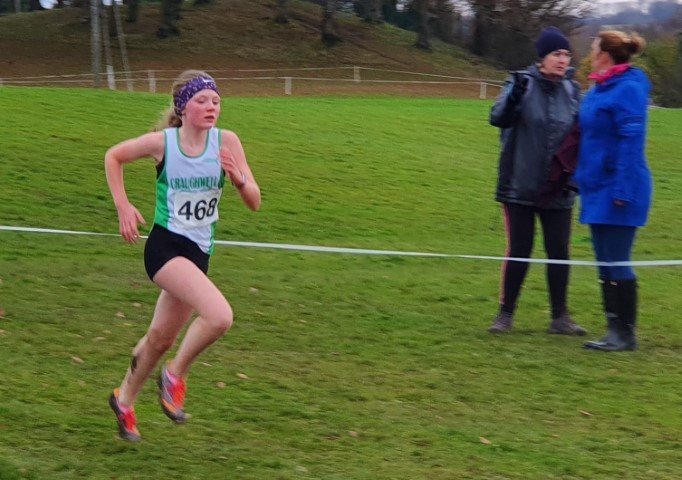 Allanah shows great form under the watchful eyes of her coaches!

The u15 Boys race was one of the races of the day from a spectators point of view.  Craughwell had a solid team in Mathys Bocquet (stepping up in age), Killian Walsh, Cian Laval and Evan Hallinan.  Mathys joined with the leading group of three or four for the first lap and then broke away into a group of two with a very talented North Sligo athlete. The pre-race plan was for Mathys to press the pace on the downhill and flat sections of the route.  On the third “long” lap Mathys made a move and really stretched the field.  It still wasn’t quite enough to shake Rian from North Sligo however and on the last hill Rian got his nose in front. 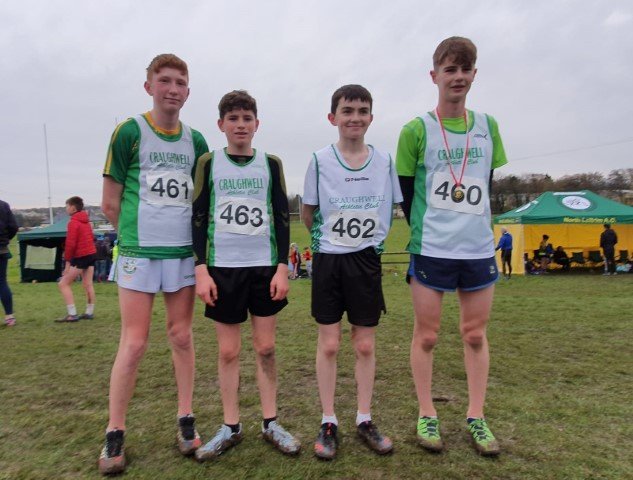 Mathys celebrates with the team after his fine individual gold! 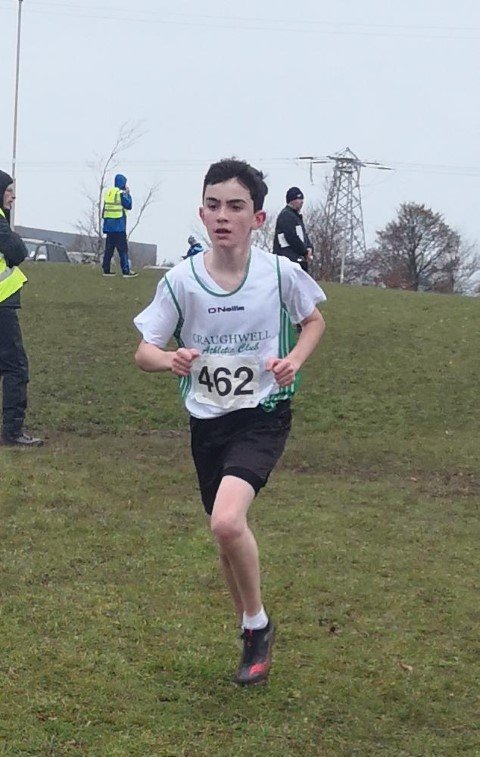 Knowing there was a very long run-in for hom, Mathys didn’t panic when overtaken and pushed again on the home straight for a long gut-wrenching finish to claim the gold – a brilliant run and the perfect blowout!  Killian was next clubmate home in a similar fantastic on that long home straight – this time Killian could not quite find a way around the long elbows of his opponent but he finished in a very strong 22nd position.  Cian Lavan was close behind in 26th and Evan Hallinan in 27th.  Overall the team were unlucky to be just pipped for bronze by a single point! 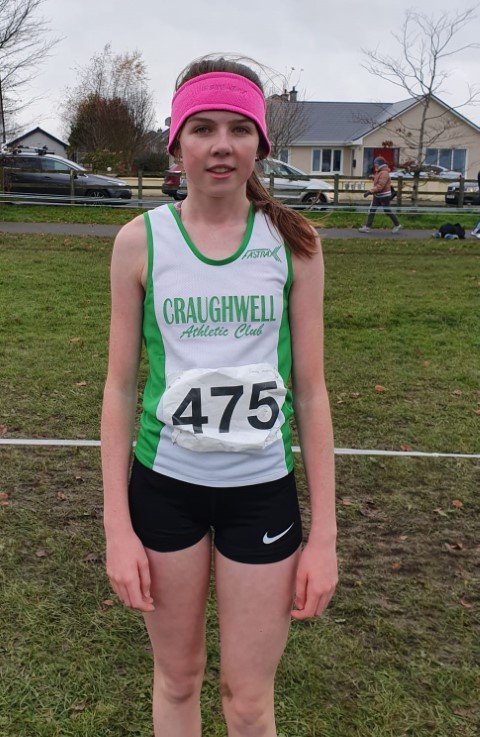 The u17 girl’s race was mixed with the u19 race and featured perhaps the most dominant winner of the day in the incredible u19 Maeve Gallagher – a stunning athlete and one to watch – definitely a contender for the all-ireland.  Craughwell had one Athlete in the u17 race – the ever reliable Emily Miskella stepping up.   As this race unfolded, Emily got stuck in a rotten position between two groups of athletes, just off the leading group.  In normal circumstances, Emily would have closed the gap but she had a tough Camogie final yesterday and I could see that it took a shade of the usual pop from her legs so she didn’t quite manage to recover the ground on this occasion.  She finished 4th of the 14 finishers in a fine run which will stand to her in the weeks ahead! 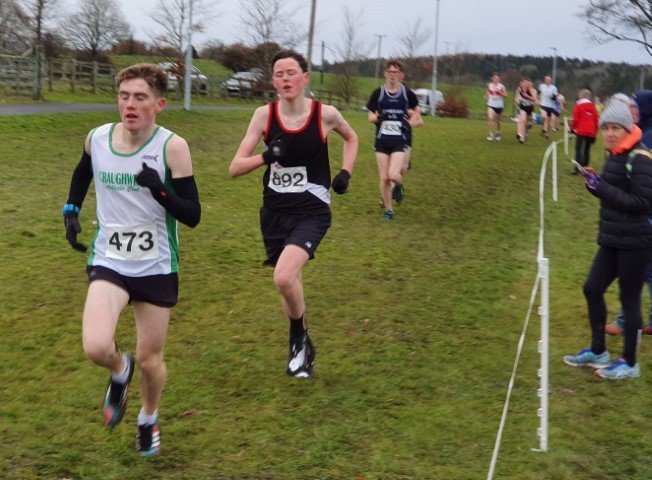 Ross went back to his favoured plan – go hard and let pride take you home!

The u17 boys race was run in parallel with the u19s, but the u19s were set off at a stagger of 500m.  Craughwell had one late injury in Oisin Davis, so didn’t have a team on this occasion.  Sean Cotter fresh from a victorious County football final with Oranmore yesteray took to the front early and pressed home for a comfortable and confident solo victory.  Sean looks to be exactly where you would want to be at this stage of the season – fresh and fast.  Next home for Craughwell was Ross McGuinness stepping up and showing a nice return to form with a superb 5th place.  Ross headed out hard and was in 4th until that last long stretch when he just got caught.  Third man home and also running well was Luke Burke in 14th place – he was going even better but the last two laps just caught up with him.  Luke is showing signs of racing himself back to fitness after a few injury setbacks earlier in the season.  Sean, Ross and Luke scored on the winning Galway team. 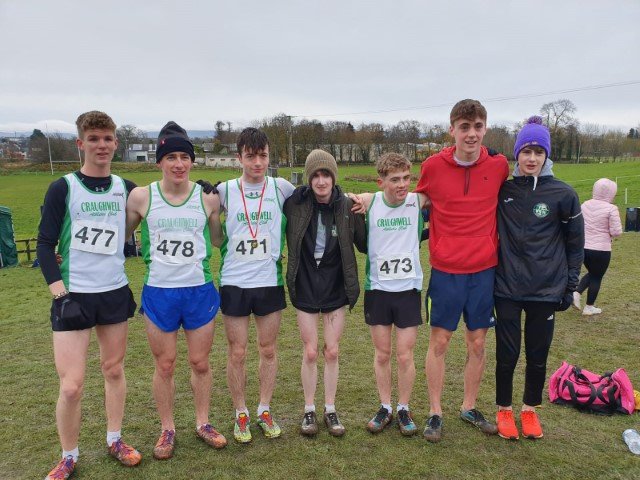 The boys all hard solid runs!

The u19 boys race was another high quality field with another dominant winner in Michael Morgan.  In the battle for the “best of the rest”, William Fitzgerald had a solid run in 4th, closely followed by Patrick Noonan in 5th and Kyle Moorehead in 7th.  It was fantastic to see three Craughwell lads in the top 10 and they allscored on the winning Galway team.  At this stage, the north wind had picked up and it was quite a biting cold that either suited you or it didn’t!  The moods were changing among the spectators!! 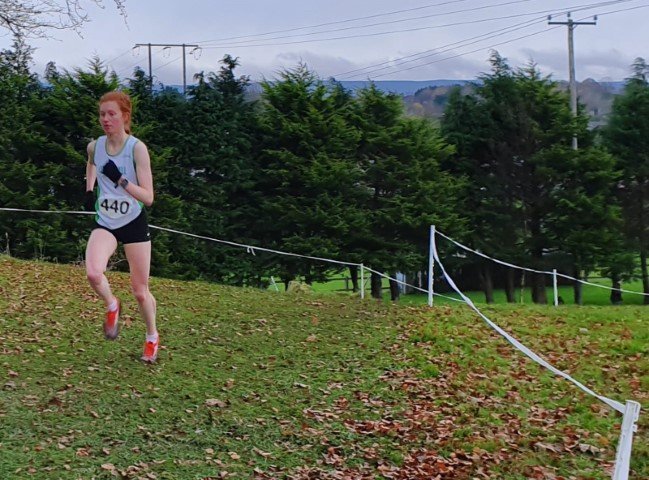 Caron driving clear up the hill

The next race was the senior women’s race and featured a completely dominant performance by Caron Ryan from start to finish.  Caron looked fresh, strong and fluid and ran like she was looking forward to getting into somewhere warm!  She has had a rotten year with setbacks, and it’s fantastic to see her back in action and enjoying her running again – really looking forward to what the future holds! 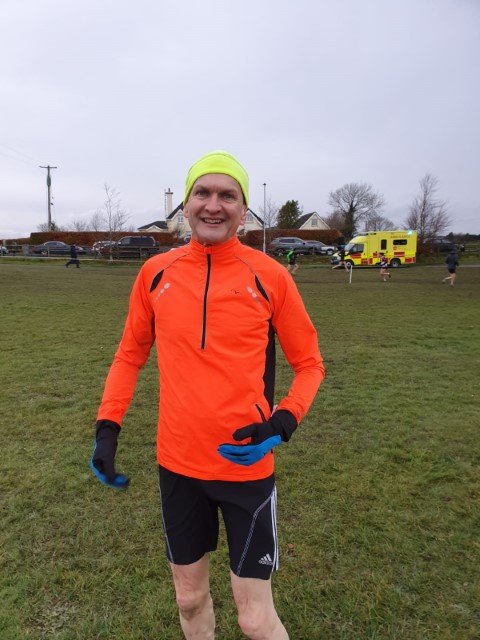 David doing his “Before” pic!

The final race of the day was the men’s 8k race.  This week we had one competitor in David Evans.  At this stage rain had joined the cold wind and raised the misery levels a bit!  Tough conditions, but David is pretty tough himself!!  David went out a little hard but recovered well and enjoyed the experience.  He finished in 26th place out of the nearly 50 competitors – not bad for an m50!