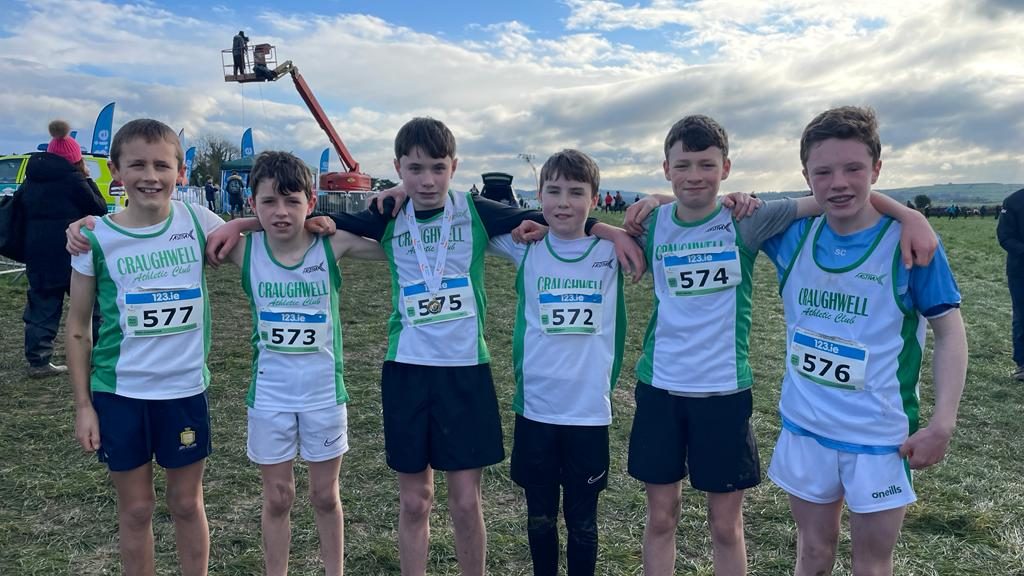 The last day of the 2022 Cross Country Season took place in Cork on Sunday with the National Uneven Ages Championships and National Novices.  The weather was cold and dry, but the course was very challenging – a classic hilly and muddy cross country course with plenty of twists and turns.  The standards were sky-high but Craughwell AC had one of its best ever days over the turf with an incredible haul of medals en-route to the village:

The Senior men’s novices race had over 196 finishers and  Craughwell fielded a strong team which won a fantastic Silver medal from the 26 club teams competing.  The team packed very well with William Fitzgerald finishing 12th, Patrick Noonan an exceptional 15th, Jack Miskella 28th, Kyle Moorhead 33rd and Mark Davis in 76th.  William, Patrick, Jack and Kyle all scored on the Silver medal winning Galway team along with Abas Edris of Castlegar and John Moroney of GCH.

It’s the second year in a row that Craughwell have won Silver medals for both Club and County in the National Novices. The Senior men also picked up Silver medals from last weekend’s National Senior Championships where they came 2nd in the Category C Championsips.

The u17 boys race was perhaps the neutral’s race of the day due to the large group of athletes contesting for the win all the way.  As well as individual and team medals, there were also international selections up for grabs for an international next January.

Mathys Bocquet went with the leading group, and held there until about 3.5km in when he slipped from 9th back to about 14th.  He was in 14th at the bottom of the large finishing hill but he put on an incredible charge up that hill to finish an exceptional 8th place and secure his selection for the international in Perth (in Scotland, not Australia!) this January. Mathys was incredibly unlucky to miss his last international outing for the SIABs at the start of the pandemic so hopefully he gets to go this time!

In the u17 girls race, Holly O’Boyle ran well in 85th, followed by Holly Shaughnessy in 113.  Both girls found the mud tough going but ran well all the way.

The u15 boys was an absolutely cracking race.  Declan O’Connell ran off the back of the leading group for much of the race, accompanied by Stephen Ruane who loves the muck.  With about 700m to run, Declan made a long push for home, building a lead of about 20m.  With 100m to run, the lead started to shrink and he was eventually run into 3rd in the long push for home.  Declan gave absolutely everything he could to secure the win and can be delighted with his medal. Stephen Joyce finished incredibly strong to close in 10th, closely followed by Stephen Joyce in 22nd and Keelan Moorhead in 111.  The team won an exceptional gold for club team and Declan and the two stephens scored on the winning Galway team and provincial Bronze team.

Alan Hallinan got the day off to an exceptional start with an incredible win in the u13 boys race out of 157 finishers.  The race finished with a punishing 500m uphill drag and Alan was at the back of a fairly large leading group but kicked like a mule over the last 300m to pass everyone and take a famous win.  His team of David Frazer (31st), Sean Cleare (36th), Oisin O’Donovan (64), Donal Coyle (94) and Sean Colleran (115) did enough to seal a marvellous Bronze medal for County Galway.

In the u11 girls, Muireann Kelly had an exceptional run to finish 33rd from the large field.  Muireann was followed home by Laoise Corban (51~) and Laoise Colleran (109).

Kate Kilkenny was 77th in the u13 girls followed by Jena Brady in 115.