Wishing all of our members both young and old a very happy Christmas and prosperous new year. It’s being a fantastic year for the club on both the competitive and non-competitive scene.

Our membership numbers have gone through the roof (if we had a roof !), we’ve become the biggest juvenile club in Ireland ahead of all of the large urban centres, have the 26th largest adult membership and combined are the 4th largest club in the country – a remarkable achievement for a club in a rural location.

I will post a separate article on our superb competitive performances throughout the year but want to focus on progress with facilities in this article and to sincerely thank all who have supported our fund-raising efforts to date.

Before I continue, I’d like to personally thank all of the parents, coaches, teachers and athletes who nominated me for the Today FM award recently. I was humbled by all the messages of support and the congratulations afterwards. I’m really just a representative of all of you for that award and there are a whole lot of people besides me who are putting heart and soul into the club, both coaches and athletes. So I’m only accepting awards on all of your behalf! I’ve to attach a photo of the award which I will cherish and even more so cherish the lovely book of pictures and letters that some of the younger athletes wrote about me – far more credit than I deserve!

Anyway, getting back to what this article is about – the extraordinary progress that we have made on facilities for the club this year. We first started thinking about buying part of the field adjoining the school way back in 2008, coincidentally around the same time as the country officially fell into recession. The seed for these thoughts originated from the highly successful partnership with the school and the soccer club to build and open the astro turf in 2007. With the legacy of Celtic Tiger prices still impacting expected land prices, initial discussions were for a much smaller site as it was all we thought we would be able to afford.

We looked at the possibility of getting a fifth of an area next to the school on which we’d put up a shed to accomodate indoor training. Those discussions went nowhere however as we could not get a bank loan for it. But it sparked ideas as to what we needed and we set about scoping out a larger building on a 1.2 acre site. 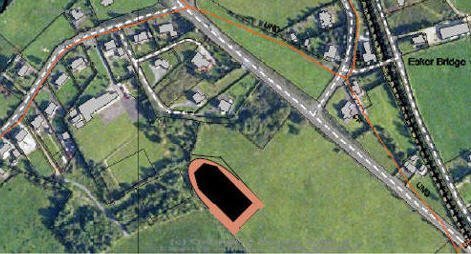 James Farrell prior to his departure for Australia did the initial drawings of the building for us and had some test holes dug. On James’s departure for foreign fields, he handed the work over to Noel Gorman who with some initial help from Paul Miskella on the civil engineering side of things, took it from there.  In 2011, we had a further agreement on a 2.36 acre site subject to planning and finance. Given its location adjacent to all of the other facilities, the planners were very supportive and we received planning permission that June but we still failed to attract the interest of a financial institution. 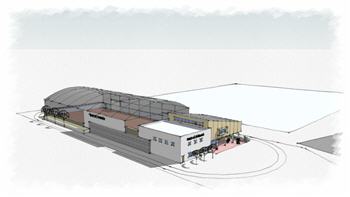 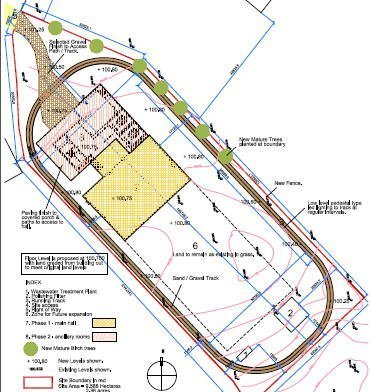 We looked at various permutations of sites over the years including ones incorporating soccer pitches to see if it could be progressed as a joint venture. All to no avail however as we could still not arrive at a financially viable solution/ 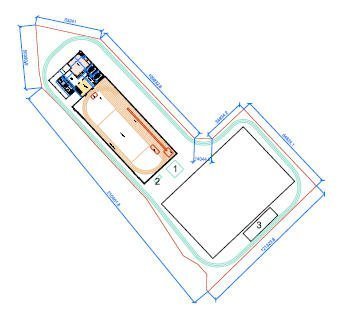 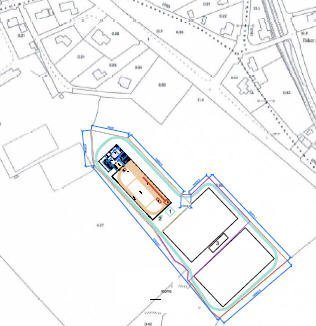 We looked at long narrow sites and one incoporating a full track to see if it might accomodate adult recreational members also but again failed to figure out a viable option. 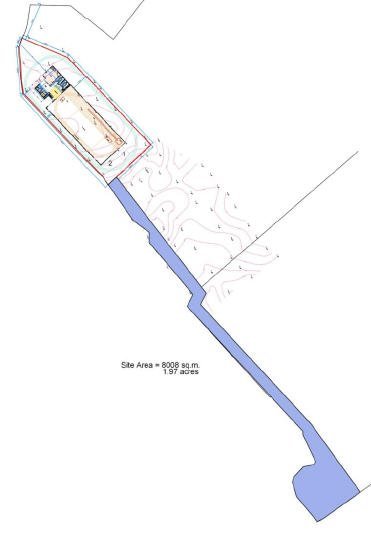 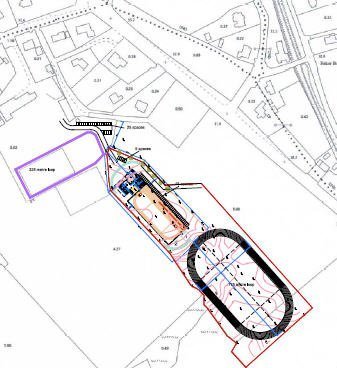 In 2013, we thought we had it all figured out with a new deal on a 5-acre site but again failed to get the support of a financial institution. 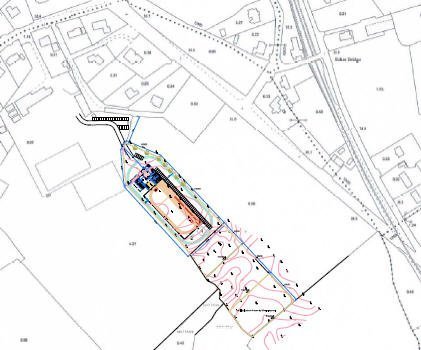 We briefly looked at alternatives of smaller sites but it went nowhere either. 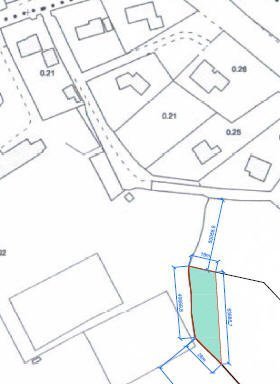 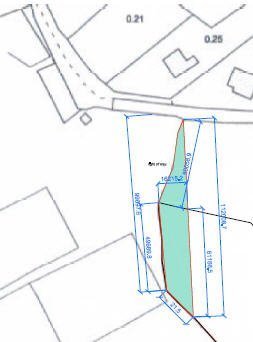 We almost parked the plans for good at that stage but in December 2013 with numbers still growing rapidly, myself and our Chairperson Mark Gillen decided that we were shortly going to hit a crisis due to lack of space and had 3 options – buy land at the school, buy land somewhere else or stop taking new members. The clear preference was to stay at the school and we agreed yet another purchase price that we thought the banks would support – this time for an 8-acre site. 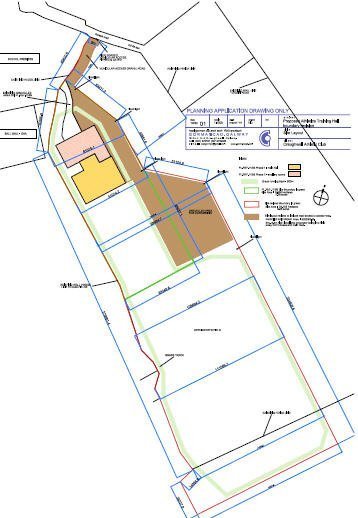 Yet again we got rebuffed in our quest for financial support from the banking sector. So in February this year I emailed out all my athletics contacts to seek members’ loans and donations to see what we could come up with. By chance, Donal Traynor from Ulster Community Investment Trust was on my mass email. I had approached them in 2010 to see if they lend to organisations this far south but at the time they didn’t. But their scope had changed in the meantime and Donal informed me that they were actively seeking their first project in County Galway. We met within a week and I presented our detailed facility development and financial plans. Donal was incredibly supportive and almost guaranteed me that they would come on board to fund part of the land purchase. A meeting with Loughrea Credit Union around the same time also proved fruitful and between the 2 institutions and parents’ loans, we had enough funding to buy the land.

Lots of follow-on work in the following months on legal, planning and financial side eventually culminated in the purchase of the 8-acre site in September this year, with pedestrian access from the school grounds and vehicular access from the adjacent side-road – a historic milestone for the club! The club is now embarking on an ambitious development plan which will include an 800m running trail, a 400m grass/tartan track, tartan sprint lanes, jumping and throwing facilities and a state of the art indoor training building,

We still need lots of support from club members over the years ahead – with debts of €158k and major development plans, we need to stay focussed on both helping our members achieve their potential and providing better facilities for our members and coaches to use. It will be a challenge but with everyone pulling together, it’s just a small hurdle to clear on the road to making the club a super-power of athletics in the West of Ireland!

Our particular plans for the coming year are to develop further outdoor facilites to bring the site fully into use, hopefully with the help of grants and some limited fundraising. To this end, we are still open for donations from members as part of our ‘sponsor a metre of ground’ appeal!! I need to get a map of same up on the website early in the year. And we will be organising some sort of fundraiser in May hopefully. The picture below outlines the tentative plans for 2015. What is marked as phase 1 and 2 is the eventual building we will erect but that won’t be in 2015. Instead we will focus on extra outdoor faclities, in particular lighting the full field and the provision of sprint lanes and long jump runway. And hopefully a grass 400m track and a gravel pathway around the field’s perimeter. 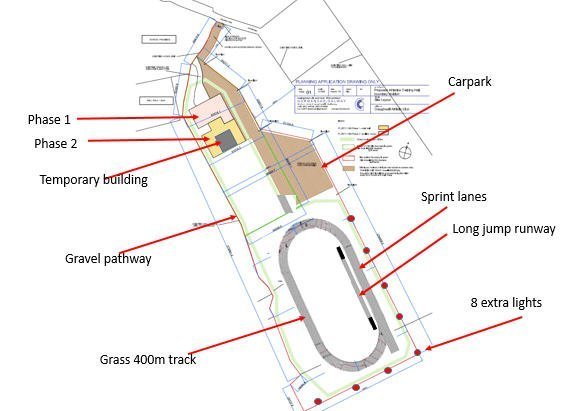 Before I sign off for the year, I want to thank in particular our current chairperson Mark Gillen for all his support during 2013 and 2014 to help get us to the point we are at today and to his predecessor Tony Fitzpatrick who did the same during his tenure as chairperson from 2010-2012. I would also like to publicly thank Noel Gorman for the countless times he has drawn and redrawn maps of the facility over the last 5 years – you can see from the above that we had quite a few maps in that time! And to Packy Martyn for his patience in the long drawn-out process of closing the sale of the land during the year. And I also wish to particularly thank our 5 Trustees without whom we could not have accomplished the site acquisition – Marion McEvilly, Mike O’Connor, Martin Conneely together with Mark Gillen and myself. And a big thanks also to Anne Hession and the residents along the laneway leading to the site, all of whom were very supportive of the club getting planning permission and the taking in charge of the road by the council.

Finally I’d like to thank our hard-working committee who reviewed and re-reviewed plans throughout the last number of years to reach this point and also the most important people of all in the club – our fantastic athletes and the 50-strong group of coaches who unselfishly spend hours of their time each week at the astroturf patiently coaching our athletes.