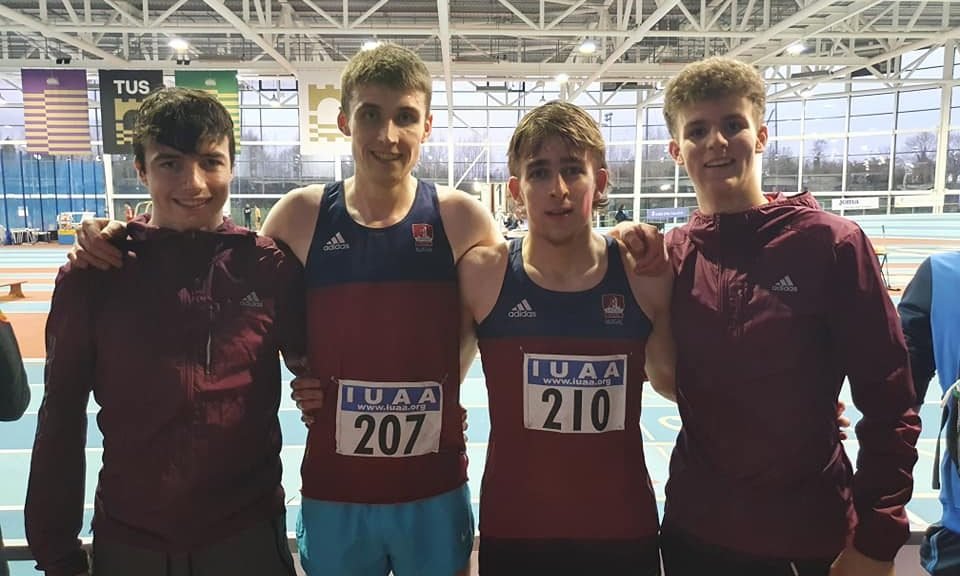 College Athletics has a fantastic buzz at the moment, and it’s great that we have so many excellent colleges with coaches delighted to collaborate with club coaches for the betterment of athletes. I think it’s really worth encouraging your kids to try out College athletics, even if they have never tried athletics before! The IUAA Indoors took place in AIT yesterday and it was a day’s sports entertainment worth paying top-dollar to see – except it was free!!

Jack Miskella, fondly codenamed “Miskey” in Galway athletics circles produced the Galway run of the day in the IUAA Indoors with an absolutely outstanding run to finish 4th in a NEW CLUB INDOOR RECORD of 3.55.29. This is also an NUIG and UCG indoor all-time record!! It was an absolutely stunning run from the Craughwell man, diving deep into the well to beat many talented athletes including members of the Gold Medal winning u23 Eurocross team. Brilliant to score a College record on his last competitive indoor race for the College! Take a bow Jack!

Patrick Noonan wqas in the same race and probably wasn’t too thrilled to see himself drawn in the faster and absolutely stacked heat with Eurocross Silver medallist McElhinney and Mark Milner and co. Paddy had a outdoor 4:03 from last Summer in Belfast but has had a few setbacks with Covid and injury recently and a 4:03 in the height of summer in Mary Peters is a different proposition to a 4:03 in Winter in AIT – his indoor PB was 4:13 iirc!! When pressed to predict Paddy’s time I felt sub-4:10 would be an outstanding run at this stage of the year in that heat with the field likely to disappear into the distance. Paddy blew away my expectations with an outstanding 4:03 PB, working for large sections on his own but then hauling back the pack one by one at the end. See the race below:

In the 800m, Sinead Gaffney was in the second qualifying heat. When the first heat was won in a relatively slow time, she showed her smarts by taking it on herself to drive the field on to a fast time, leading for the first 3.5 laps and cruising it home in about 2:23 – there was still a large group about her so she needed to have her wits alive to make sure she qualified, which she did, comfortably.

In the final, Sinead worked off the back of a tightly packed leading pack. There were plenty of surges and opportunities to fall off the pace but Sinead stuck bravely to her task and made a thrilling move on the final bend to get into a long sprint for 3rd. She just ran out of steam in the last few strides but it was one of the races of the day to watch and it is so great to see to see her up there challenging and making things happen in a national final while balancing a busy work and study schedule. Watch the race below.

In the men’s 800m, there were three heats with the first two from each heat and the two fastest finishers to go through. The first heat ended up being extremely fast which is exactly what you don’t want to see if coming after! Kyle Moorhead was placed in the second heat and it was absolutely stacked with three guys with significantly stronger PBs than Kyle in there. Tom McStay sitting beside me leaned over and said “Kyle needs to finish top-3 in 1.55 to qualify”, and he was bang on.

Kyle gave it an exceptional shot, driving up into second and looked for all the world like he would get through but just got pipped on the finishing straight by a fast finishing TCD athlete. He ran 1.56.51, and 1.56.01 qualified – so, so close but a super learning experience. To give some perspective on how unlucky Kyle was with his heat – heat #3 was won in 2.11 and 2.10 would have qualified, a full 15s slower than Kyle’s!!

Earlier in the day, Sean Cotter ran in the 3000m and blitzed a superb personal best, running a superb 8.43. Sean worked well with college training partner Aaron Brennan of GCH and the two traded places a few times, helping each other to big personal bests. Seán’s time is a new Club Junior 3000m Indoor record, knocking almost 10s off the previous mark set by US Collegiate Damian O’Boyle in 2014.

Watch their race below:

Sinead Treacy was in the 400m and placed 5th in a time of 57.43 having earlier ran an impressive 56.92 in the semis. After the race she had these thoughts:

I wasn’t too happy with it, made a tactical error in that I didn’t drive all the way to the corner on the break, but lesson learnt and there will be other days.

– Sinead on her final

Sinead did help her relay team to a fantastic Bronze medal – picture below with Brendan Glynn of NUIG.

In the jumps Laura Cunningham was our sole representative in the field events where she came 6th in the long jump with a season’s best of 4.75m and only for a tiny break, looked to have broken the 5m mark on her final jump. Laura went on to place 7th in the high jump later in the day with a 1.50m leap.