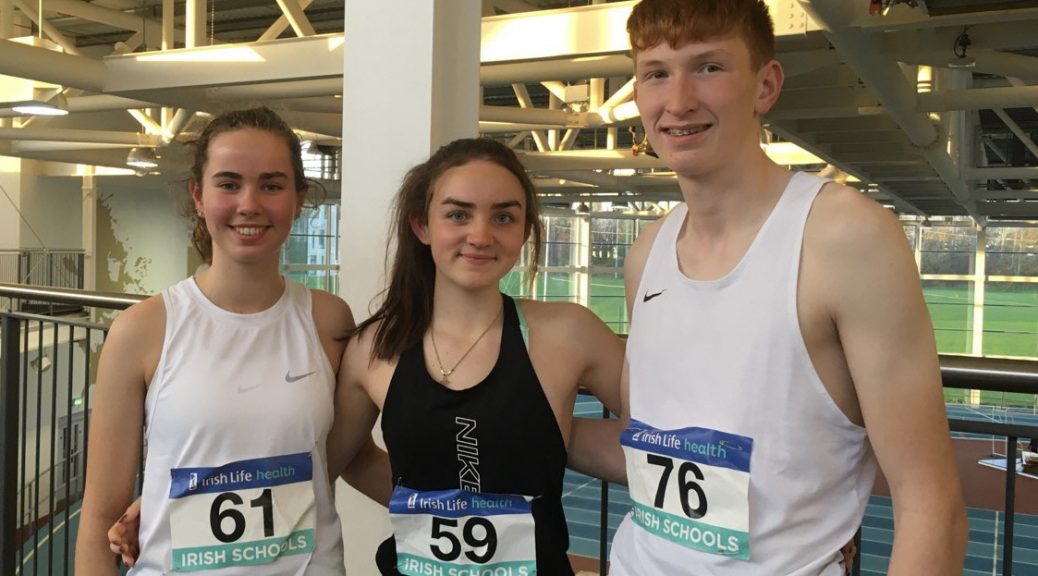 A small contingent of athletes battled it in the National finals of the Secondary Schools Combined Events which were held in Athlone on Saturday with some spectacular performances from athletes in the club.

In the Intermediate Grade, competition for international places was intense with both Evan Hallinan and Jade Moorhead going real close to making the top 4 that are automatically selected for the international team. Leonore Church added an impressive 230 points to her Connacht total to accumulate 2418 points across the 5 events, taking 11th place overall and improving across all 5 events with 4.29m in the long jump, 1.46m in the high jump, 6.73m in the shot putt, 10.78 in the 60m hurdles and 2:39.88 in the 800m.

Jade Moorhead was in incredible form on the day with PBs in all 5 of the events and taking 6th place overall with a points total of 2995 – one of the finest performances ever from an athlete from the club in the multi-events. Her day started off with a blistering 9.71 in the hurdles, which is a massive improvement since the same event 2 years ago when Jade ran 12.05 in the Connachts. She followed it up with 4.67m in the long jump and 6.39m in the shot, the latter an 89cm improvement on her recent Connacht throw.

Then onto her favorite event the high jump. Coming into this year, Jade’s PB in high jump was 1.55m and she improved it twice at the Connacht outdoors with 1.58m and 1.61m before improving again at the National League when leaping 1.63m, and yet again 2 weeks ago at the Connacht multi-events when leaping 1.64m. Well yesterday Jade surpassed everything she has achieved this year with incredible 1.67m and 1.70m leaps for yet another set of PBs. And going ever so close to 1.73m as well – check out the final attempt below.

Jade’s leap catapults her onto the AAI’s all-time best ever indoor high jumps since records commenced over 100 years ago – sharing 33rd place on a list that includes our own Cathriona Farrell who is in 7th place with a leap of 1.81m. Jade wrapped up her day with yet another PB – this time in the 800m with a fine time of 2:37.26.

Not to be outdone, Evan Hallinan was also in tremendous form in the Intermediate Boys events with PBs in four of the five events and going agonizingly close to the top 4 with a points score of 3063 and 6th place – but only a tiny 59 points away from 4th place or the equivalent of 4 or 5 seconds in an 800m. It was almost certainly the best ever performance by a male athlete from the club in multi-events with a new club senior record of 6.49m in the long jump, a blistering 9 seconds flat in the 60m hurdles, a lightening 23.85 in the 200m, an impressive 2:14.74 in the 800m and a solid 8.37m in the shot. It was a super performance especially considering that Evan was still struggling with a bit of an injury picked up 2 weeks ago prior to the Connacht’s and a performance that normally would have ensured selection onto for the international event. Evan’s hurdles were particularly impressive – you can watch them in the video below.

All in all, it was a super day for the 6 athletes who took part, lots of PBs and lots more to come from these athletes.