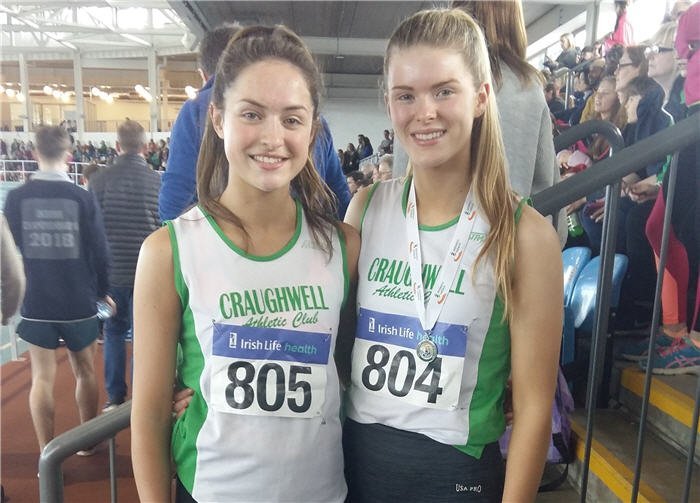 Another big day of athletics saw 4 more medals make their way home to Craughwell AC and several top-drawer performances which came very close to the medals podium. Leading the way, Laura Cunningham took the silver medal in the U19 Girls triple jump with a fine series of jumps and a best of 10.38m, with Lorraine Delaney terribly unlucky to pick up 4 breaks before leaping a big PB of 10.15m on her final jump which was just 4cm shy of taking the bronze medal.

Having placed 4th in the 1500m last weekend, Sean Cotter put in a monumental race in his U16 800m to take the bronze medal with a superb time of 2.04.87 – a very hard-earned medal and very impressive given that Sean’s strength has always been over the longer cross-country distances. And hitting the individual podium for the first time, Evan Moran took a splendid bronze medal in the U13 Boys hurdles in a time of 9.91 having earlier won his heat with 9.93. Repeating this feat, Ella Farrelly put in a gutsy performance to leap 4.04m on her final jump in the U12 Girls long jump to overtake 3rd place by the narrow margin of 2cm and claim her first National long jump medal. Tara Keane was also impressive in this age group with a fine 3.79m to place 6th. 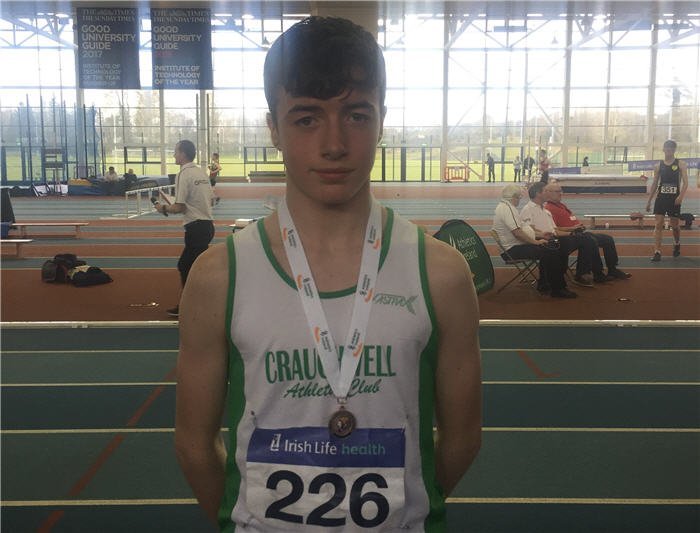 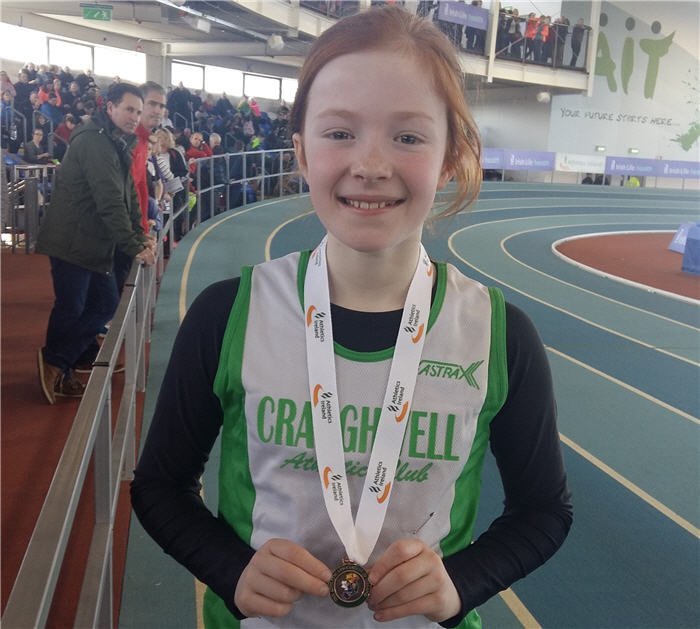 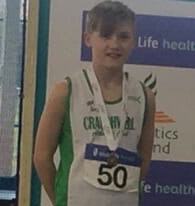 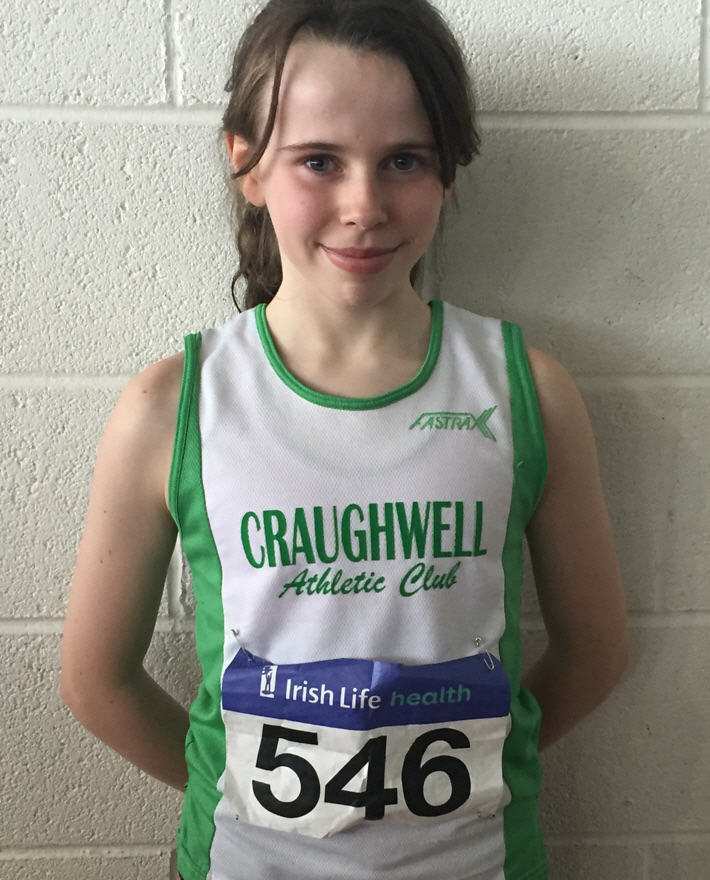 Fauve Aylmer ran a brilliant PB of 2.29.99 in the heats of the U14 Girls 800m displaying a tactical maturity beyond her years. Having to run heats and finals at this age in 800m is a big ask, but Fauve stepped up to the mark with another big performance in the final a few hours later to run 2.30.41 to take 4th place. It’s been a remarkable year of improvement for Fauve who placed 7th and 4th in the Connacht 600m indoor and outdoor last year before qualifying for the All-Ireland finals for the first time this year and now placed 4th in those finals. Today’s time is an impressive 4 seconds faster than the previous best in this age group for the club.

Cian Lavan rattled off 2 PBs in the U14 Boys hurdles, taking 3rd place in his heat in 10.26 before placing 5th in the final with an impressive time of 10.10. Arlene Earls knocked an incredible 3 seconds off her PB when placing 7th in the U19 Girls 800m in a superb time of 2.23.04. Arlene’s time is a new club junior record breaking the old record set by Linda Porter back in 2010 of 2.23.09 when Linda took the silver medal in the U17 Girls 800m in Nenagh. The standard of girls 800m running in the club is really on the up now with Arlene setting new records, Sinead Gaffney doing the same and Linda making a return to the sport this year winning the Connacht Indoor title a few weeks ago. And the likes of Fauve and Clodagh in the younger ages threatening to break all records in the years ahead.

Ellie Cronin also placed 7th with a time of 9.69 in both heats and final to take 7th in the U16 Girls hurdles. Darragh Kelly jumped strongly in the U12 Boys long jump leaping a new PB of 4.11m to place 7th in the final, while Shannon Quinn also made the final of the U12 Girls shot putt where she placed 8th with 6.59m. Kenneth O’Connor took 9th place in the U14 Boys shot putt with 7.69 and Aoibhe Fahy took 15th in the girl’s event with 7.09.

Chloe Hallinan was very unlucky not to make the final of the U13 girls hurdles when placing 3rd in her heat in 10.47 just 1/100th of a second from the qualifying spots. Chloe earlier placed 14th in the U13 Girls long jump with a best of 3.99m with Grace Keaveney 17th with 3.73m. Evan Hallinan took 11th place in the U14 Boys long jump with a leap of 4.32m, leaping a little back from the board each time which curtailed his jump.

Siofra Davis had a fine run over the U14 hurdles when placing 5th in her heat in a time of 10.56 while Saoirse Moore had the unlucky experience of a wobble on the starting blocks resulting in her disqualification but this super athlete will bounce back from that disappointment. Robert Urquhart ran just under the 10 second mark when recording 9.99 to place 4th in the heats of the U15 Boys hurdles while Conor Trehy took 4th place in the heats of the U16 Boys hurdles in a strong time of 9.51 with James Furey 8th in 13.39. 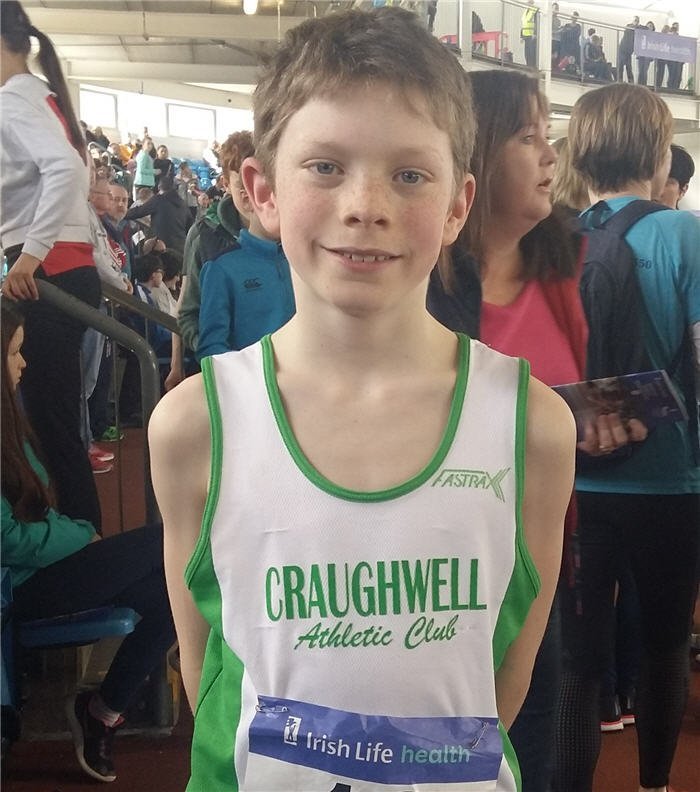 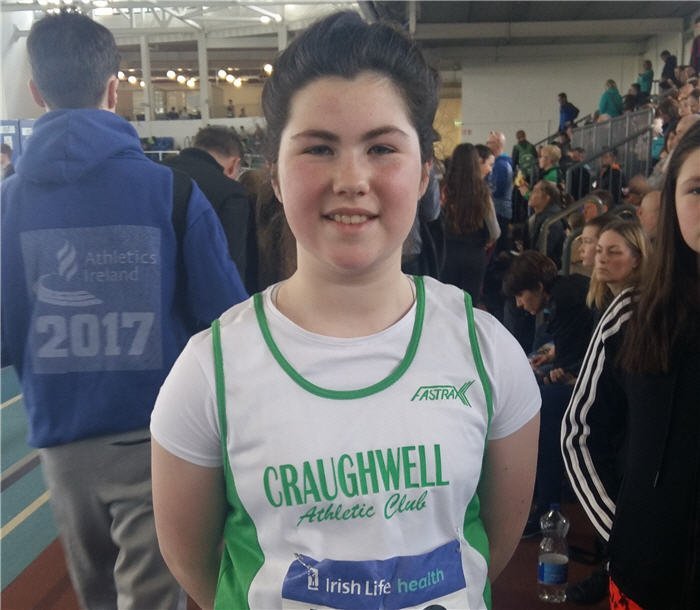 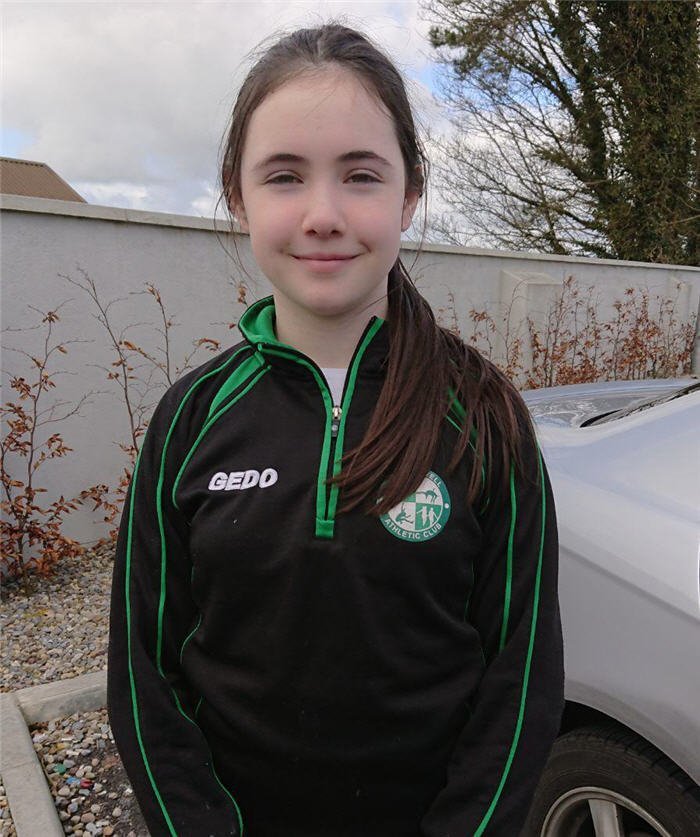 In the 200s, Chloe Farragher placed 4th in the heats of the U16 girls in a time of 28.18 while Shaun Gilligan did likewise in the heats of the U16 boys in a time of 25.15. Kyle Moorhead was unlucky not to make it to the U17 800m final when placing 4th in his heat just 0.27s from the qualifying positions while in the U16 boys, the ever-improving Oisin Davis ran a super time of 2.14.98 to place 7th in his heat. Luke Evans wrapped up his incredible indoor season with a 2.04.85 to place 8th in the heats of the U19 800m – a hugely impressive result having only taking up the sport again last Autumn after a gap of 5 or 6 years since his primary school days.

And before closing out this article, a special congratulations to our friends in Longford AC and the incredible run by Longford’s Cian McPhillips in the U17 Boys 800m final. Having annihilated the National record when winning the U17 1500m last weekend, he proceeded to do the same today when winning the 800m in an insane time of 1.52.67, in the process knocking an incredible 2.5 seconds off the old national record – a time which if Cian was in the UK would place him at the top of the UK all-time bests for 800m … http://www.gbrathletics.com/uk/imu17.htm ! Well done to Cian and his dad Paddy one of the stalwarts of Longford AC !! And massive well done also to GCH’s Emma Moore who smashed the championship best in the U15 Girls 800m with a superb run of 2.13.16 knocking more than a second off the old record in a very impressive and controlled performance.