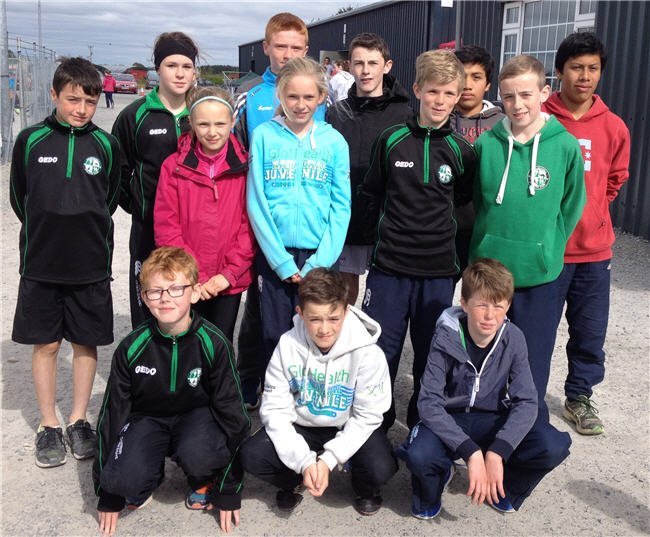 Another busy day of athletics in Claremorris and another highly successful day for the club with many superb highlights throughout the day and athletes taking home a huge haul of 31 Connacht titles, 21 silver and 9 bronze medals. Most notable performance on this occasion was in the jumps where Jerry Keary leaped a massive 1.81m in the U16 Boys high jump to set a new senior club record for the event, just eclipsing the 1.80m best set by Tomas Keehan a number of years ago.

There was some fantastic jumping from the girls also, with Lorraine Delaney claiming a new PB of 1.54m to take the U16 girls title and Leanagh Gilligan doing likewise in the U14 girls with a massive leap of 1.51m.

The long jumpers were not to be out done either with some fantastic jumping and many Connacht titles, particularly from Aidan Conneely (6.01m, U19 Boys), Matthew McKernan (5.99m, U18 Boys) and Daniel Callanan-Forde (5.97m, U16 Boys). There were impressive performances also from the girls, in particular the U16s who took places 1-4 in their event with Lorraine Delaney claiming the title with 4.70m a fraction ahead of Laura Cunningham on 4.65m. The haul of long jump medals keeps the club at the helm of Connacht long jumping with 10 Connacht titles over the 2 days of Connacht championships and 11 other podium finishes.

There were plenty of fine performances on the track also, in particular in the U13 boys where 4 of the top 5 places went to the club, U13 60m where Shaun Gilligan won the title, U14 200m where Freya Bohan and Mia Waters both featured in the top 4, U15 100m where Siona Lawless and Alison Leahy placed 1st and 4th, and U19 sprints where Sinead Treacy took home both 100m and 200m Connacht titles.

Full results are attached here. I will add more detail and photos on our own performances later today.