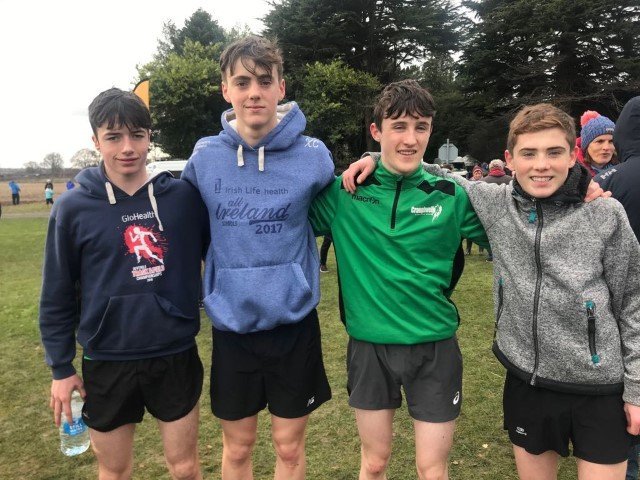 The nationals are always an exceptionally high standard, but there’s a general rule of thumb that the closer to Dublin the venue, the hotter the field, and this was never more true than today.  In each event from the U12 right up to the Senior Men, the depth and standard was unbelievably high and medals were as rare as hen’s teeth.

The sun was out but the wind was biting and a heavy week of rain in Dublin had left the hilly sections of the beautiful National Cross Country course in Abbotstown coated in a skin of mud.  The custom-built course is a fantastic venue for spectators and athletes alike, something to be proud of – well done to all involved in the Sports Campus project – definitely the way to go.

Part of the intrigue of Cross Country is how courses can dictate the race!  One feature of this course is a fabulously wide long start of about 250-300m, which narrows and swings to the left into some relatively tight turns for many of the races.  This encourages fast starts and a lot of the day was decided by who could manage to recover from the start!  It also meant that some athletes who prefer to build gradually from the back were unable to execute their strategy effectively.

The U16 boys race was the highlight of the day for Craughwell, with the Connacht Champion team of Sean Cotter (25), Ross McGuinness (35), Oisin Davis (44) and Luke Burke (110) doing enough to win 3rd place out of the 17 teams by a slender margin of 2 points.  It is impossible to pick out a man of the match performance here as they all excelled and needed to in order to clinch this narrow victory.

The Bronze-winning U16 Team

The talented Sean Cotter has had a niggling hip problem for the past few weeks and despite rest and physio it was still bothering him in his warm up.  Ever brave, he put it behind him when the gun went and took to the fore of the field covering the first kilometer in well under 3 minutes to put himself into a superb position for individual glory as they headed into the large laps.  About 2km in his hip really started to flare up, and Sean showed incredible character to not only see the race out but to ignore the pain and finish strongly. 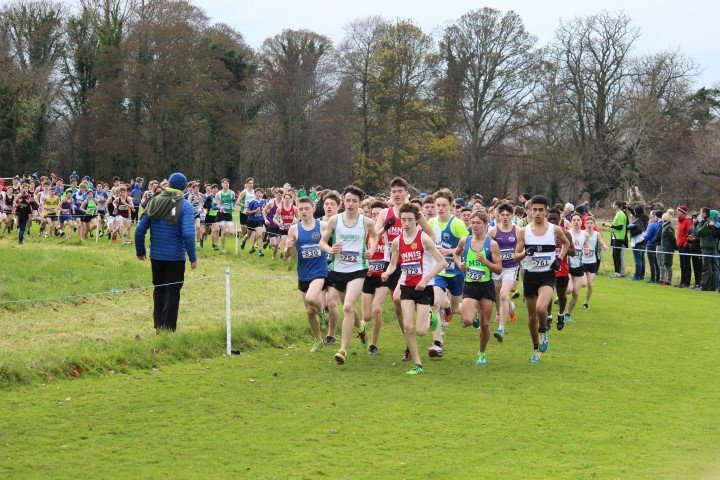 Next home was Ross McGuinness in 35th, the Connacht U15 champion who stepped up to the U16 team. Ross has an amazing gas tank and ability to recover on his feet so this course suited him perfectly.  He recovered from the fast start and cruised through the field picking people off with each passing kilometer to finish 35th.  Oisin Davis was very close behind Ross in 44th.  Like most in the field, Oisin found the starting pace intense but showed great grit to hold his position bravely as he recovered into it, fending off all challengers and wasn’t passed for basically the whole race.  Newest member of the team, Luke Burke is very talented but as a triathlete hasn’t yet had quite the focused running base of his teammates.  He does have a phenomenal kick which has been duly noted in training – he promised before the race that he would make full use of it on the long home straight and he certainly delivered – passing 3 or 4 competitors in a gut-wrenching final 200m to get under the arch.  Coming from Connacht, the standard was such a shock that all the lads were a little disappointed at the end but this soon turned to joy when the news broke that they had won an incredible Bronze – well done all!!

Earlier in the day, from a Craughwell perspective, the action got underway with the U12 boys race of 2 km where Fionn Higgins, sporting the classic #1 bib number, had a fine race to finish in 97th, followed closely by Jack Farrell (153).  This was a huge step up for the lads from Connacht and an experience that will stand to them in years to come.

From Castlegar to Abbotstown, it’s been a great Cross Country season for our U14 girls team – today the fortunes were mixed but they each gave it everything.  The girls were led home by a resurgent Clodagh O’Meara in 100th place.  Clodagh was a narrow 4th in the Connachts and her fitness is improving with every race.  Right next to Clodagh was Fauve Aylmer (102).  Fauve took the race on hard for the first Kilometer but whether it was the fast start or just one of those days, our Connacht champion couldn’t quite find her gears on the day.  Fauve was upbeat and philosohical after the race – she’s had a great early season and is rightly looking forward to the indoors! Next home for Craughwell was Siofra Davis (140).  Cross country is not Siofra’s favoured discipline but she ran strongly throughout.  Closely following Siofra and completing the team Holly O’Boyle also had a strong run stepping up in age on the day for the sake of the team. 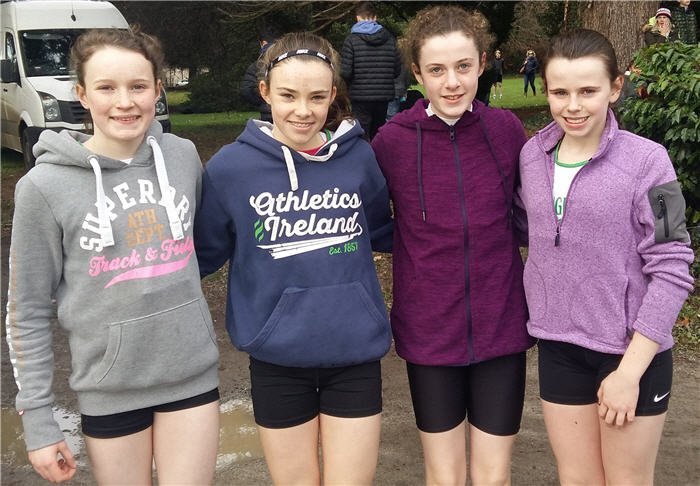 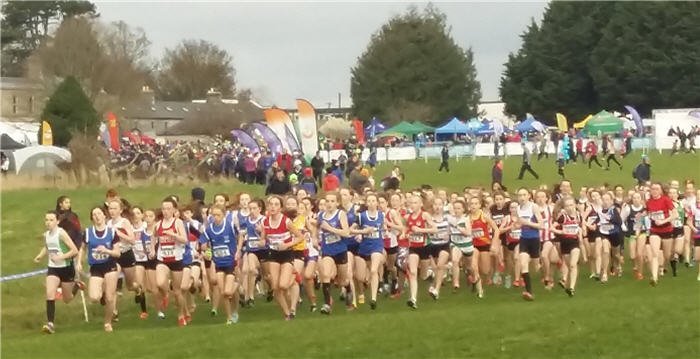 In the U14 boys, we had two competitors.  The talented Mathys Bocquet had a hugely disappointing Connacht Cross Country, fearing that his season was over when he pulled up with a calf injury on the starting straight in Sligo.  He has wisely taken the time off since and after a few jogs and some bike work this week decided to try the step up in age.  He ran exceptionally well, placing 33rd out of the over 150 competitors – a stunning run.  He will be stronger and better in three week’s time for his own age – should be exciting stuff!  Sean Liston also had a very solid run all the way to finish in 143rd position and is one for the future!

We had just one competitor in the U16 Girls race – despite a pretty bad cold, Aoibhinn Keane stepped up in age and ran a consistently hard pace throughout the 4km course to take 128th position.  Aoibhinn has the distinction of making the all-Ireland for almost all of her athletics career! 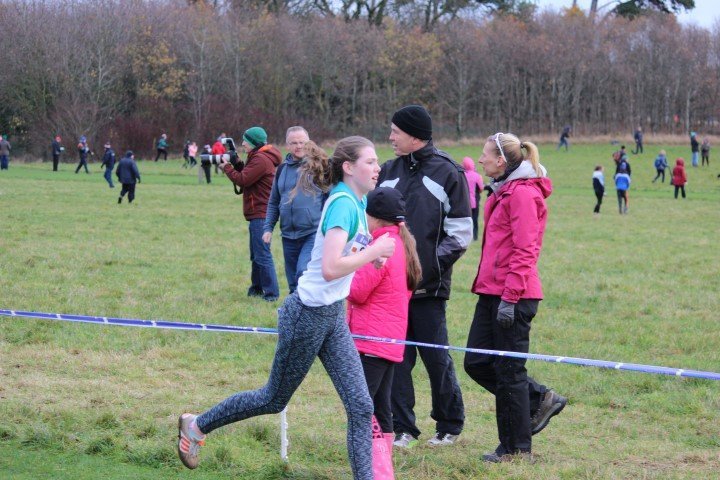 Aobhinn under the watchful eye of Marathon Champion Maria McCambridge

Next event for Craughwell was the U18 Girls where we had one competitor.  Ailbhe Miskella stepped up in age for this event with no expectations and had a fantastic effort to finish in 41st place – what a great run!  Roll on December 15th! 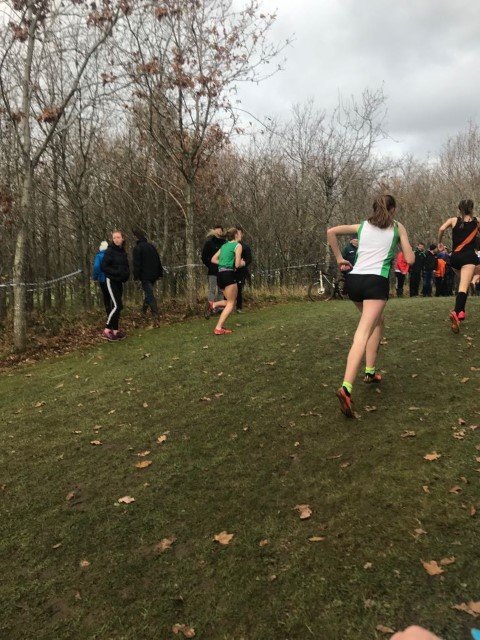 Ailbhe on the charge!

For the U18 boys, we weren’t entered as a team due to the way the Connachts went, but we did have a really strong crew.  Ben Ryan, sporting his awesome custom-made singlet blazed home in 28th place in a fine run, recovering greatly from the foot-problem that dashed his Sligo run.  The rest of the guys were all bunched closely together.  Next home for the club was the ever-improving William Fitzgerald in 70th. William is coming out the far side of a dip, and his training is clearly working very well for him now – he has found his way back to enjoying his training and racing which bodes well for the future.  Patrick Noonan went out HARD, possibly a little too hard, and felt the pinch of the pace as his race wore on – he showed great character toughing it out to hold on to 72nd position but the experience of mixing it at the front of the field will stand to him greatly..

Kyle Moorhead, stepping up in age had one of the races of the day in 77th position – he looked strong and relaxed throughout in his best race of the season thus far.  He can also look forward with optimism to his own age group on December 15th!  Last for the U18s was Sean Noonan in 84th who continues to stun his coach Lisa (and the other coaches in the club!) with his rapid improvement.  Sean is one of the top Kayakers in the country who is just taking baby steps back into the endurance world, and is doing these great runs off early-base training which is absolutely amazing.  He is about 6 months ahead of where I would have guessed he’d be at this stage and looks set for a great year. 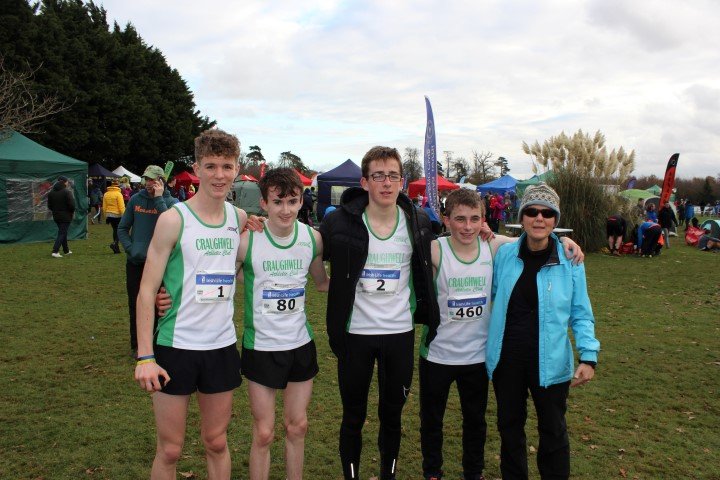 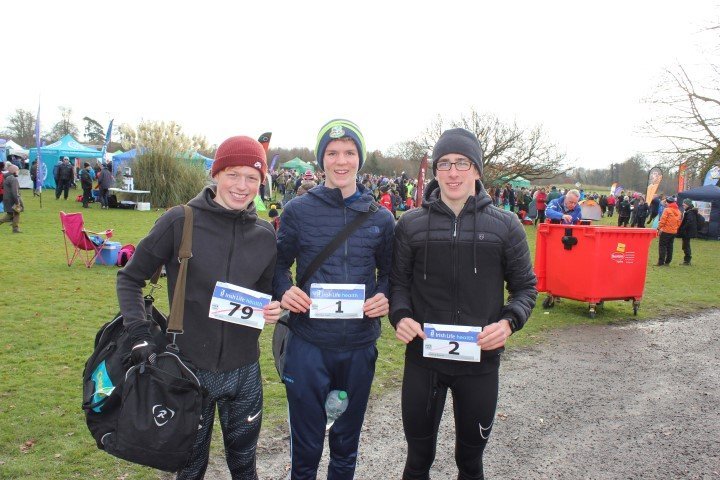 Finally the AAI get their seedings sorted!

Next up were the Senior events and Craughwell had one competitor in the Junior Women – Caron Ryan who was competing as a Junior for the last time and gave her all in a valiant attempt to claim one of the precious top 6 european qualifying slots.  Caron took the race on by the scruff of the neck and drove out hard.  It was the right strategy and she put herself in a stunning position in the top 5 with roughly 800m to go.  However when it came to kick for home and she asked questions of her legs, they didn’t react in the way they usually do – it happens sometimes, more often than not in Cross Country.  That said – she held on bravely to finish the 4km in 16th position overall – Craughwell’s highest female finishing position of the day!  A superb run for the very talented young TCD runner.  She was disappointed after the event but can look back on her effort with great pride. 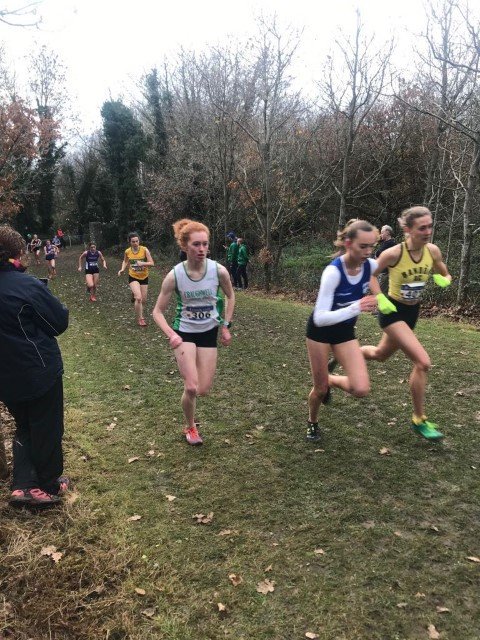 The Senior Men’s event was combined with the U23 and was perhaps the highest quality distance running event I have seen in Ireland since the European Cross Country came to Santry.  The standard and depth of the field was absolutely stunning – it really was a meeting of the “best of the best” gladiators in Ireland.  For Craughwell we had two very strong Competitors in the U23 – Jamie Fallon and returning US Collegiate Damien O’Boyle.  The pace was just incredible in this race and both guys found the going very tough.  It is only when you look back at the results and you realise the quality of the athletes BEHIND them that you realise how ferociously high the standard actually was.  Jamie came 9th U23 and 59th overall and Damian came 15th U23 and 97th overall.  To my knowledge, both guys are still u23 next year so this is a massive learning experience for them.  With consistent training, they are definitely capable of breaking the top ranks but nobody will say it’s easy!. 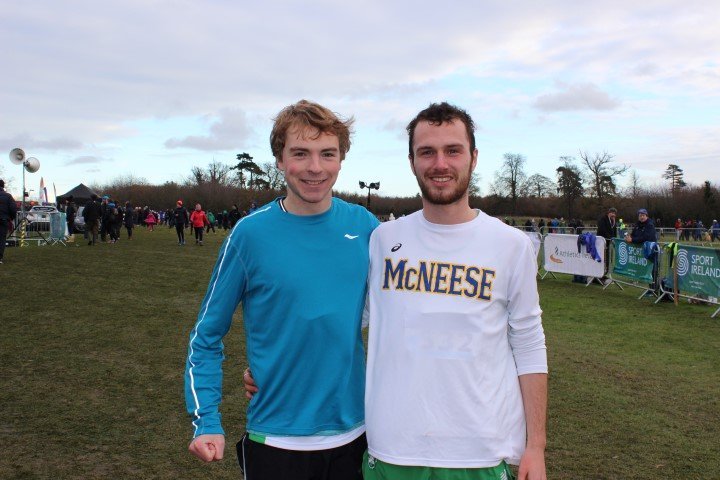 Jamie and Damien all Smiles at the Start 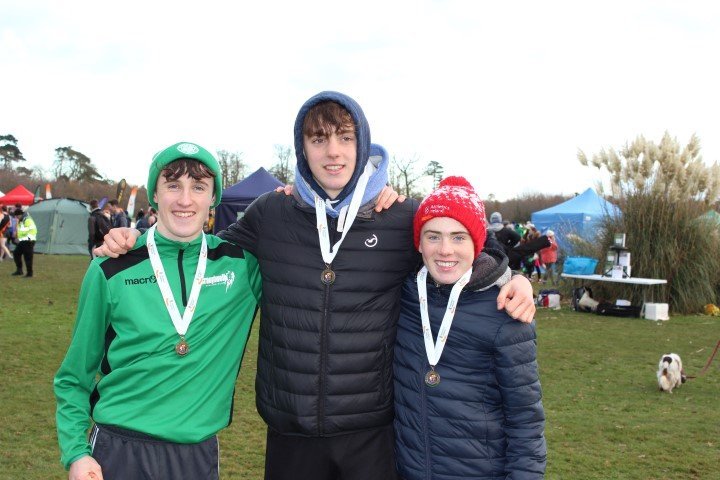 3 of our 4 medallists at the end (Sean was gone home by the time the medals were tracked down!)