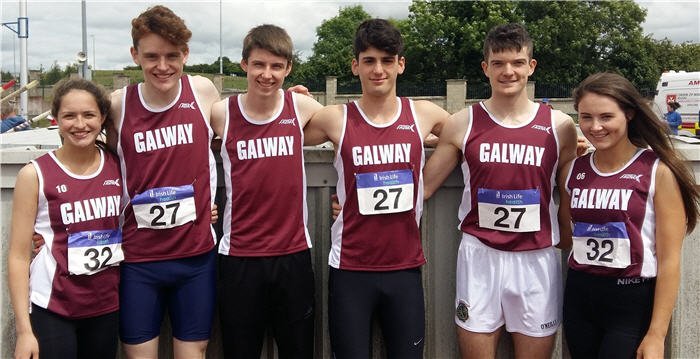 It was another bumper week of athletics with competition ranging from the local Christy Kennedy Sports held in Craughwell NS on Wednesday to the Sligo County Sports in Sligo IT the same evening to the National U9-11 Track & Field finals in Tullamore on Saturday to the inter-provincial Taillteann Games in Santry on Sunday and finally on to Round 1 of the National League held in Athlone IT on Sunday. A busy busy week!

The Christy Kennedy Sports saw teams competing from local primary schools including Ballyglas, Ballymana, Carrabane, Coldwood, Clarinbridge, Craughwell and Killeeneen. Craughwell NS emerged victorious in the larger schools competition with Ballyglas NS taking the honours in the event for smaller schools. Later that day at the Sligo City Sports, Ben Garrard and Gavin Cooney put in a blistering start in their 800m race going through the bell in 59 seconds with Ben holding on to place 5th in a new PB time of 2.00.35 and Gavin fading slightly towards the end to cross the line in 2.07.50.

Saturday saw our U9 to U11 athletes battle for National honours in Tullamore with many fine performances and close shaves with long jump duo Ben Moran and Dara Zimmerer claiming a fantastic silver medal in the U10 boys’ event and heroic performances from all of our young athletes on the National stage. See separate report from Tracy for full details. Full results are on Athletics Ireland website.

Also on Saturday in Santry, a number of our secondary school athletes were in action in the Taillteann Games which are an inter-provincial schools competition with teams selected from the best performers in the schools track and field earlier in June. Oisin Lyons ran a brilliant PB of 2.01.65 in the Boys 800m to place 6th amongst top-class opponents while Chloe Casey threw a massive 29.02cm to place 5th in the Girls Discus and heaved the shot putt out to 12.37m to take 5th place – strong performances from Chloe who is young enough again for this age group next year. Siona Lawless ran strongly on the Connacht 4x100m relay time that placed 4th in a time of 51.36.

Sunday saw Round 1 of the National League take place in Athlone IT where the club had several athletes in action on the Galway mens and womens teams. With a nice blend of youth and experience on both teams, the teams put in some terrific performances with the women’s team leading the Premier League team rankings after round 1 and the men’s team in 5th place in Division 1. For the men’s team Jerry Keary led the way with a PB-equalling 2m clearance in the high jump and followed it up with a 23.73 time to take 4th place in the 200m in addition to anchoring the Galway 4x100m to 5th place in a time of 45.78. Peter O’Sullivan ran an impressive 4.16.91 to take 3rd spot in the 1500m while Ben Garrard took 2nd place in the 800m in 2.00.51 and Gavin Cooney close behind in 5th in a time of 2.05.19. Gavin earlier ran 55.98 to place 5th in the 400m and later in the day combined with Ben Garrard, Jack Miskella and Athenry’s Ryan McNeilis to take 5th place in the 4x400m in a time of 3.42.28. Kevin Mooney placed 7th on his track debut in the 5000m in a time of 17.10.60, with Jack Miskella in 9th place.

Results of individual performances in the league are here: men women