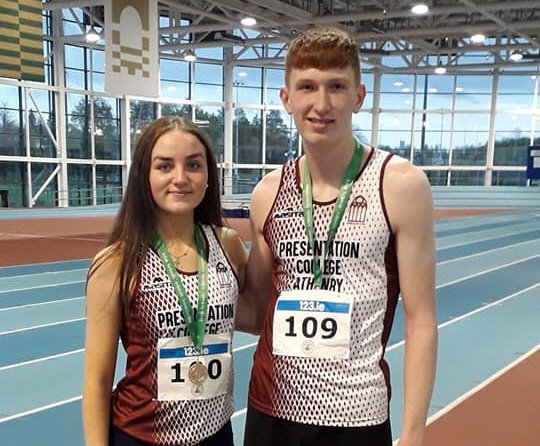 Evan Hallinan and Jade Moorhead were the stars of the show on Saturday at the National Finals of the Irish Schools Multi-Events which were held in Athlone Indoor Arena. Both athletes were representing their school Presentation Athenry and both had a superb series of performances to take the National titles in the Senior Boys and Senior Girls events – the first time athletes from the club have achieved such a prestigious double. In fact it is the first time ever an athlete from the club has won the Senior Boys title in this event while only the third time in the Senior Girls with Katie O’Donoghue and Laura Cunningham having achieved the honour in 2011 and 2018. Jade got her day underway with an impressive 9.97 in the 60m hurdles only 0.02s from her own club record and followed it up with 4.46m in the long jump, 5.41m in the shot and 1.57m in the high jump. Leading the competition when entering the final event, Jade had to dig deep in the 800m to pull out a season’s best of 2:46.90 to cement her victory and take home the coveted National title, just 63 points clear of the athlete in 2nd place.

In the Senior Boys event, Evan Hallinan had a truly remarkable series of performances with no less than 3 PBs and coming within a fraction of his PB on the remaining 2 events. Evan’s day kicked off with the long jump where he leaped to victory with an impressive series of jumps with 6.39m, 6.44m and 6.34m on his 3 attempts – his best of 6.44m just 5cm from his own club record. Next the 60m hurdles, where Evan raced to 3rd place in a time of 9.47. He following this up with a massive PB in the 6kg shot, heaving it out to 8.64m which is only 2cm shy of the club’s U20 record held by Ben Garrard. Next up the 200m where Evan raced to another PB of 23.74.

Evan was in 2nd place when entering the final event of the series with the 800m, not his preferred event by any means. Knowing he would have to run a PB to maintain his placing in silver and with gold seeming out of reach as the leader was almost 300 points ahead, Evan calculated he’d have to run 33 second laps to hold his place. At the 400m point Even was bang on that pace but had drifted back 10m or so from the race leaders. But as he rounded the bend, a wave of energy propelled him to start closing the gap on the leaders and he had pulled onto their shoulders by the start of the final lap. And then magic can happen! Evan upped the pace yet again and blazed around the final 200m in an incredible 29 seconds to take the victory on the line with an outstanding 5-second PB of 2.09.41. And when the scores on the board were finalized, it showed Evan in the gold position with a huge 3061 points score, just 45 points ahead of the athlete in 2nd place.

A big shout out to all of the coaches who helped prepare the athletes for the competition and especially to Aíne Fahy and to Athenry AC’s Iain Shaw who helped some of our older group to big PBs in the shot putt in the provincial and national finals.