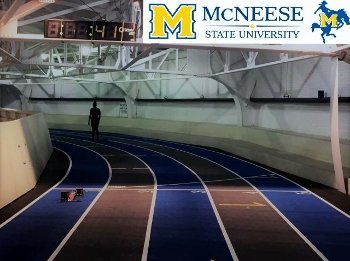 The Club’s very own US Division 1 Student-Athlete, Damian O Boyle, returned to the track, Friday January 26, at home in Lake Charles, LA with the second McNeese Indoor Meet of the season.

This was Damian’s first competitive racing action in just over 9 months, after an extended absence, unfortunately caused by a series of niggling tendonitis injuries, which saw the athlete miss out on last years Southland Conference Outdoor Championship Meet. He also  missed the entire Summer season here at home, and was left watching from the sidelines as he attempted to return to fitness, rather than featuring for the Cowboys, during the recently concluded 2017 Cross Country Season. The team notably made an impressive push for the title falling short only to a count back decision as the meet was tied 42-42 with Fierce Rivals Lamar University of Texas, at the end of the a very tough 8k race.

Damian competed in the 3000m at the meet, tacking himself onto the incredibly quick early pace of 8:25 being set by the old guard of McNeese Seniors (Enrique, Fisher and Oliver). Fortune wasn’t to favour the brave on this occasion though as the pace became evidently too much for Damian as the Cowboy brigade thundered toward the 2 kilometre mark. The extended absence and hiccup over the winter rearing their heads (hopefully for the last time!), as he began to labour heavily over the last 800m to finish in a time of 8:59.97. Officially converted by the NCAA for an unbanked (flat) track to 8:53.76, still someway off his Personal Best for the distance set almost two years ago in Santry (8:44), as complications in the early part of last years seaon meant that a new mark was left unrecorded.

Damian had this to say after his performance, “I’m just happy to finally be back running and getting close to 100%. I’m relishing the prospect of getting back to my best and setting some new marks in the coming months!”

The coming weeks will see Damian travel to Birmingham, Alabama to compete in the Mile event (1609m) at the Samford Open, before hopefully making the trip back to Alabama for the Southland Indoor Conference Meet which takes place February 21-22. This should be a precursor for the McNeese Men’s team as they gear up to make a big push in attempting to secure the Outdoor Conference Team Title at this years Championships in May.

We wish both Damian and the Team the very best of luck in the coming months!