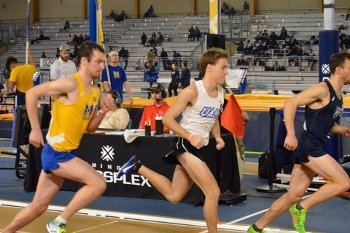 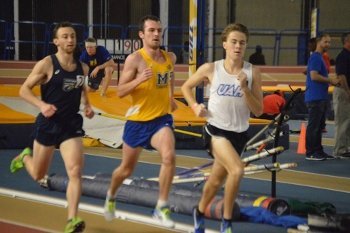 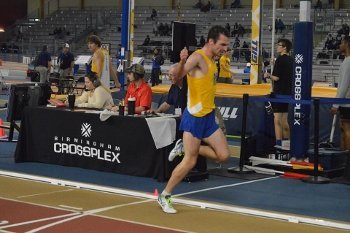 Damian was back on the track again recently,  when he competed at the Samford Open Meet, hosted by the University of Samford in Birmingham, Alabama.

After making the 9 hour journey by bus from Lake Charles in Louisiana the day before, Damian lined up in the A-Section of the mile event (1609m) in the morning section of the meet. A very intelligently run race saw Damian sit right in behind the leader for the first half of the race, maintaining an overall pace just under 4:20 for the distance (32 second laps for those who are not knowledgeable about splits). With an early break coming as the lap counter read 4 laps to go Damian held his position keeping his place at the back of a small group of three athletes beginning to pull away from the field. With 2 laps to go and now making moves up into second place the race was now on for our man! As the Bell rang for the final lap Damian, still looking comfortable in second place, edged up onto the shoulder of the leader from Emory University, who surged forward in response maintaining his line and holding onto the lead around the penultimate bend, ultimately to no avail as Damian slipped right back in behind awaiting the Back straight where he turned on the afterburners coming wide to streak away from the field effortlessly all the way to the finish, taking his first collegiate win of the season easily in a time of 4:16.81 only 1.14 seconds off of his PB for the distance set this time last year at the University of Notre Dame. (and currently ranked 12th in the Southland Conference)

Mind and Body well and truly back and firing on all cylinders for the young man, but with the season unfortunately shortened this year due to the earlier injuries, the decision was made to double-up this weekend and so coming off the Track after the mile meant straight into the recovery phase in order to prepare for the 800m only 2.5hrs away. After some light lunch and a quick warm-up it was back on track for the start of the 800m. This time (in the B-section) following along for the ride Damian chased the group through the laps as they clocked off their splits 28, 29, 29 and then through the final lap struggle to cross the line in a close 4th with a finishing time of 1:58.53 again only a second off of his official PB of 1:57.51 (1:55.86 converted) to place him 11th overall in the event. (a very good time considering not being fresh after 9 months away)

This is the leading mark this year from a Craughwell Man, and very close to the indoor record

The Indoor season will conclude with the Mid-Week Southland Conference Championships back in Birmingham, Alabama, before a quick turnover into the Outdoor season where the Cowboy’s will open up at home on March 10, at the Annual Cowboy Relay Meet