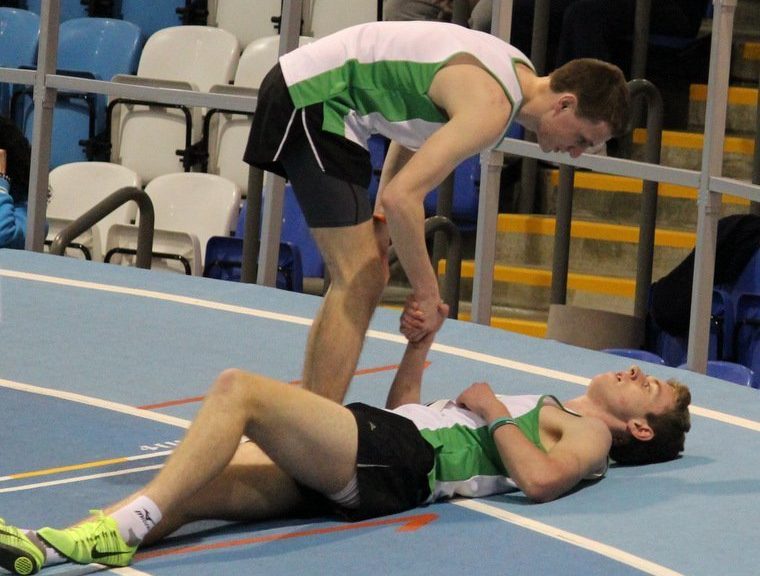 My name is Neil Greaney. I am a former Craughwell AC member, and have recently qualified with a masters in Mental Skills and Mental Health in Sports and Exercise. This qualifies me to work primarily as a ‘mental skills coach’ or a sports psychologist.

My story in Craughwell AC began at the age of 15, when I first attended a training session with the middle-distance group run by 3 very influential coaches in my life – Michael Tobin, Mark Gillen and Mark Davis. From the moment I arrived, I felt as though I belonged. The atmosphere created in Craughwell was something unique and special. I had never come across anything like it in many other sporting ventures before.

This environment gave me every opportunity to grow rapidly, which I did. For the first year and a half of my athletics career, I ran a PB in every single race.

My growth knew no boundaries, and the fantastic coaching, training group and environment was the reason. How am I so sure? Very simply because once I was removed from that environment, to go onto a supposed superior ‘high performance’ environment, my development stalled. As though a switch had been flicked off. At 17, having completed my leaving cert, I encountered a crossroads, and an opportunity I couldn’t refuse.

My initial plan was to take a year out, develop myself both in athletics and in life. I envisaged myself going from strength-to-strength training with my buddies in Craughwell, and after meeting with the one and only Eamonn Coghlan, I had even been convinced to give up my beloved soccer to focus solely on fulfilling my athletics potential. That is when DCU came calling, and on the very last day before the CAO deadline I decided I was going to Dublin.

I remember ringing Michael that day, and I can still remember how excited he sounded for me, and how supportive he was on the phone. He gave me a glowing reference and by September, at 17 years old, I had moved into an apartment block on campus in DCU consisting of 50 athletes. Quite a meteoric rollercoaster 22 months – from casually taking up athletics to improve my speed for soccer, to moving into a ‘high performance’ athletics environment, surrounded by people who had been competing since they were 5 and 6 years old.

Before long, I got the feeling I was slightly out of place. As a relative newcomer to the sport, my naivety and innocence towards training, eating, resting, recovering, sleeping was on show for all to see. I didn’t know how to live my life as an ‘elite athlete’. 90% of the lodgers in the athletics block had represented Ireland at some point, while I had less than 20 track races to my name, and just one bronze medal from all Irelands to show. Culture shock is an understatement.

I learned on the job, and slowly but surely began to live more productively. I was lucky enough to have Irish international runner Darren McBrearty take me under his wing and show me the ropes. Darren was (and still is) an exceptional runner, with a 1:47 800m and 3:42 1500m to his name. He had a perceptively good balance of life and training, which I enjoyed striving to emulate. At the end of my first year, I endured a laborious outdoor track season, failing to accomplish any medals or even PBs.

I remember missing the camaraderie on race day that we had during my Craughwell days. That camaraderie actually acted as a positive distraction to my devious mind from overthinking the race. Now, I could never get my focus right, my thoughts and emotions would have me drained before I ever reached the start line. Each poor result hit me like a train, and I took it all very personally. Especially since I now knew lots of the high performing athletes at events (and more importantly, they knew me!). My resilience was tested continuously, and I, more often than not, failed.

By second year, I had matured. A few weeks off in August to recuperate, and cross-country season saw me knocking out 70-mile weeks, aiming for a top 12 finish in the nationals, maybe sneaking a place onto the Irish XC team. I came 13 th , which, in many ways, should be perceived as a success. But at this stage, my nature of consistently beating myself up and being hard on myself was crippling my progression. Nothing a warm weather trip to Portugal with some high-profile athletes couldn’t fix, I told myself.

That January, before indoor season, I headed for Monte Gordo with Darren and a few other hugely successful athletes. I was excited for the two weeks of uninterrupted, strenuous training. Day one, I stuck on my brand-new runners and headed for an hour ‘easy’ run with the lads. Blisters. Bad, bad blisters. I didn’t run again until day 6. Another real test of resilience and patience, another test I would later learn, on reflection, that I failed. The training camp as a whole cost me more than it benefited me, with only 7 of the 14 days being training days, and just 2 track sessions (which was the main reason I went).

By March, it had all become too much for me. The build-up of minor setbacks I had being taken personally, the overwhelming transition from Kilcolgan to DCU, and from Craughwell AC to DCU Athletics Academy had all but broken me. I had to seek some professional help, in the form of Tony Og Regan, who was a qualified Sports Psychologist. It was a case of too little, too late, however. Tony was super, and he even helped me win a 5k road race in a PB time in the first month of working with him. But my passion was dead.

The final straw – being overlooked for the University track and field team to run the 10k, which had been my goal all season. I was done. Mentally finished. Longing to be back in Craughwell AC, or back playing my number 1 love soccer.

That’s what I did. I went back playing and coaching soccer, which I still do to this day. But, my 3-year athletics experience from 2013-2016 educated me on life, and left me with questions, curious on what I could have done better. That curiosity led me to the University of Limerick, where in 2021 I graduated with a master’s degree in Mental Skills and Mental Health in Sports and Exercise. I am a big believer in education as a form of understanding one’s own issues, and also of similar experience as a form of understanding other’s issues. With that in mind, I can now offer to help athletes who tend to encounter similar struggles to mine.

My areas of expertise include:

Other areas I feel to be extremely important to athletic development are helping athletes design an appropriate environment in which to train (and live), and aiding mental resilience development. With my own experience as an athlete, including extensive adversity and maladaptive coping strategies, I believe this aids my understanding of what an athlete’s mind can look like on the inside. I would be delighted to help any upcoming athletes in Craughwell avoid slipping into the same traps in which I got caught.

We well remember the day that Neil joined the club – he quickly showed great ability and we were all excited by his potential. Back then he slotted into an exceptional group of young middle-distance talent including Paul Joyce, Nicky Sheehan, Conor Gillen, Jamie Fallon, Damian O’Boyle, John Cormican, Keelan Ryan, Matthew Moran, Peadar Harvey and others – they were the original “Wolfpack” and with their super-supportive characters, quickly formed a strong bond of friendship with each other and their coaches. Mike Tobin, Mark Gillen and I shared their training between us and had a fantastic time with this bunch, and we all gained a lot from the experience. It was a special time and I’m pretty sure the current generation were inspired by the exploits and attitude of this crew. I am convinced that Neil had the ability to be truly top-tier. We did a lot of things right, but I often tell my current athletes that they are lucky I learned from the mistakes I made with this earlier group, and sometimes wonder what might have been if I knew then what I know now!!

We’d like to thank Neil for sharing his experience and encourage anyone in any sport or club around Galway looking to gain a mental edge to reach out to him at: neilgreaney88 at gmail.com (replace the at with @), or on social media. We wish him the best in his career and have no doubt he will be successful. Here are just a few random articles from Neil’s time competing for Craughwell AC – he’s mentioned in many more!.