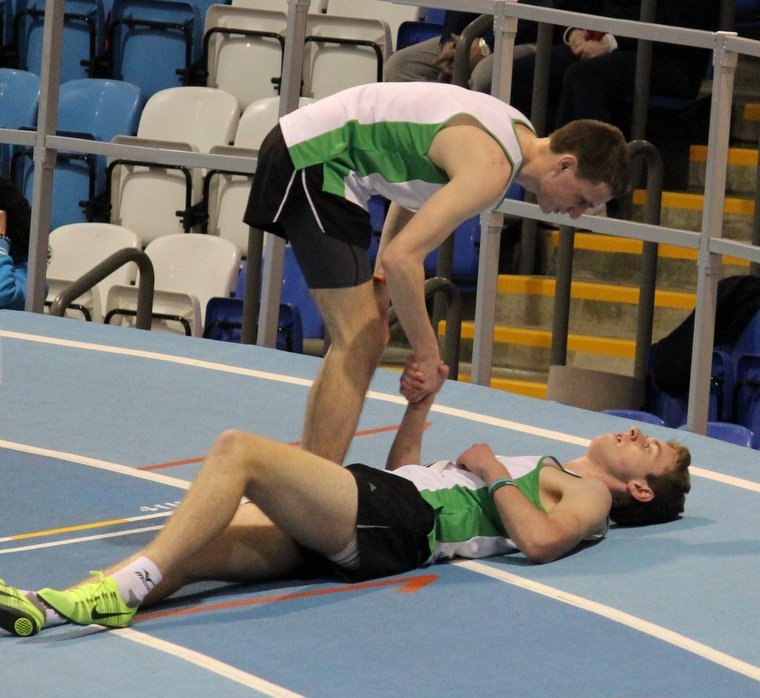 In his second race victory since taking up the sport 18 months ago, Neil Greaney ran a perfectly executed 800m race to blast to victory in the Men’s 800m C race at the AAI Graded Track & Field meet in Athlone on Saturday. Mark has already covered a lot of the highlights in his excellent article and pictures on the website (including the above picture that I’m unashamedly stealing!). So I’m just going to add a little to that.

Neil’s previous victory came in his debut race for the club when he claimed the 2011 U17 Boys Cross Country title in the Galway championships. He has had many fine races since then but none more so than on Saturday on the boards in Athlone IT. The big advantage of a graded race is that invariably each race gets a pace maker who runs a particular target time for the first three-quarters of the race. In the C race, the target was a 62/63 400m. Neil stuck diligently with the leading group for the first two laps and when the pace maker moved aside after 500m, Neil was holding second place and on target for a big PB. Hitting the bell, the PB was on and Neil surged forward to eventually overtake the leader and take the victory in a fantastic time of 2.05.19 – knocking a whopping 4 seconds off his PB. To add to the celebrations for Neil, Celtic moved a step closer to the Scottish title with a 5-0 drubbing of Dundee!

Earlier in the A race, Nicholas Sheehan (fresh from a 2 hour soccer match on Friday that went to extra time!) underlined his potential when racing to a 1.59.58 time to take 2nd place and just marginally outside the club record that he set a few weeks ago at the AAI Indoor Games where he raced a time of 1.59.37. In the B race, a dramatic finish unfolded when Conor Gillen, Paul Joyce and Damien O’Boyle all finished in 2.01 with Paul taking the plaudits with a 3rd place finish in 2.01.25, Conor 4th in 2.01.39 and Damien 5th in 2.01.88 – all new PBs.

There is seriously hot competition now for club records amongst these guys and also a few other athletes who didn’t take part this weekend. The top 10 best ever indoor 800m performances currently reads as follows:-

We’re likely to see a few more sub 2 minute performances before this season is out!

Many thanks to Athlone IT’s Dermot McDermott and the Irish Examiner’s Feidhlm Kelly who paced the 800m races. We’re lucky to have a guy like Dermot McDermott floating around Connacht. From Sligo, Dermot is a coach in both Sligo AC and Athlone IT as well as helping athletes from many other clubs. He selflessly paced several races on Saturday despite having his own race on Sunday where he placed 22nd in the National Interclubs cross country in Tullamore.

While our middle-distance elites were battling each other for club records, Conor Duggan was busily improving his own club records in the 200m and 60m. Conor knocked an incredible one-third of a second off his recent 200m club record when racing 24.14 in the men’s 200m and followed this up with a splendid 7.48 to lower the club’s 60m record.

And Maireád McCan and Claire Ryder showed good form in the long jump to go close to the 5m mark with leaps of 4.99m and 4.88m. The club indoor record of 5.25m held by Cathriona Farrell will come under serious pressure from both athletes next weekend at the Connacht indoor championships in Athlone.

One of Maireád’s jumps was captured in dramatic fashion by Mark below. Before our younger athletes read this and decide to go off and dye their hair pink in order to get a better long jump technique, I should point out that Maireád is fund-raising for the Irish Cancer Society!! Anyone interested in making a donation to Maireád’s fund-raising efforts can give it to me at training and I will pass onto Maireád, or give direct to Maireád if you are up at training at the same time.

Some super photos of the graded meet also on facebook. 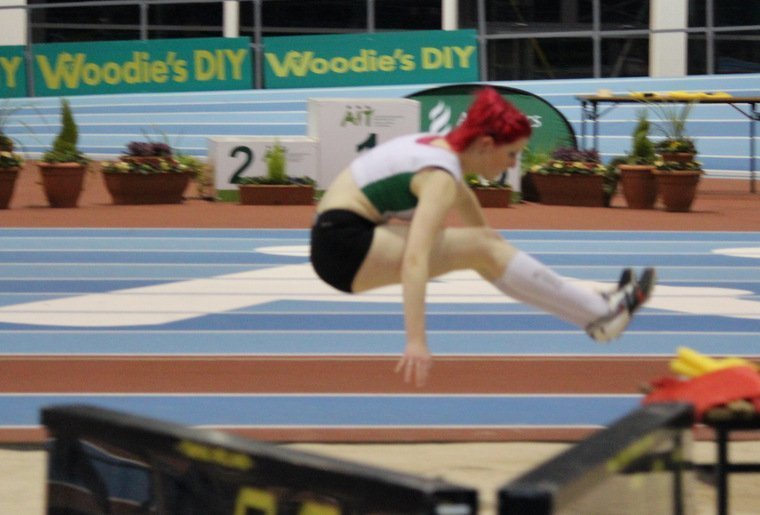