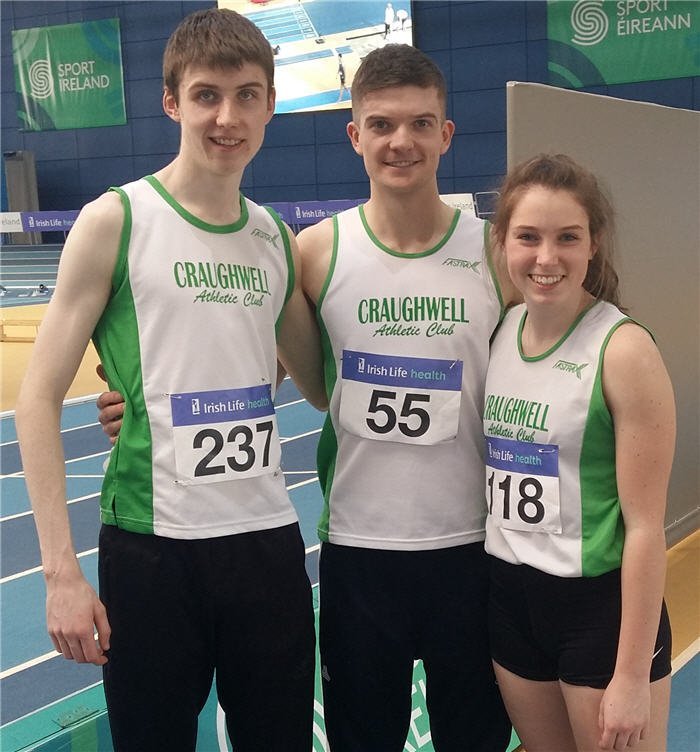 Day 1 of the National Senior Indoors took place today with fantastic performances from 3 of our athletes in the semi-finals of the 800m.

Sinead Gaffney ran a stormer of a race in the women’s 800m semi-final to break the club’s (and her own!) senior record of 2.20.04 which she set in the same race in 2016. Sinead ran perfect splits for the 4 laps, going though 400m in 69 seconds and finishing strongly to take 5th place in an excellent time of 2.19.56. Sinead’s time was good enough to take the last qualification spot for tomorrow’s final – a huge achievement for Sinead. It comes on the back of some excellent performances in the last number of weeks – running 2.22. 62 in the National League in mid-January, following it up a day later with a 2.23.38 to win the Galway Senior 800m title, 2.20.87 in the second round of the National League and 2.20.27 in the National League final in early February. The stars were aligned for a big performance today with so many good times in the preceding month and Sinead’s new club record is richly deserved with the added bonus of qualification for the final.

Sinead’s 800m was swiftly followed by Gavin Cooney and Jack Miskella in the second semi-final of the men’s 800m. Both men have been edging towards breaking the magical 2-minute barrier this season and were looking to the races today to drag them another split second towards that mark. Unfortunately, a tactical race got off to a slow start and went through 100m in 15.5 second making 2-minutes unlikely. The pace wound up a little and Gavin chased the leaders hard throughout to blaze across the line in a new PB of 2.01.32 and only just miss out on qualification for tomorrow’s final – taking 7th place overall with the first 6 making the final. Jack ran a brilliant 2.05.75 just a second outside his PB but a fine performance at the highest level of 800m running in the country.

So a great day in Dublin and best of luck tomorrow to Sinead in the 800m final and also to Jerry Keary in the final of the men’s high jump.