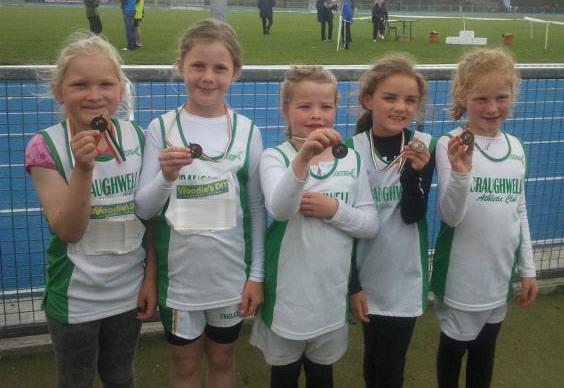 The next generation of Craughwell AC athletes made the long journey to Donegal for the National finals of the U9-11 age groups on Saturday with 6 relay teams in action and many teams in the paired events.

The following provides a close-up of the action from some of the coaches in the different age groups.

Our journey to Donegal for our first All Ireland was exciting! We traveled with our 12 U9’s who were winners already in our eyes and had worked hard in preparation for the big day! Representing Craughwell in turbo javelin, we had Aoibhe Farragher and Sarah Byrne. Both girls did a fantastic job given that the turbo javelin is a new event this year … watch this space next year!

We had the mighty duo of Evan Hallinan and Fiachra Bond in the long jump. Both boys jumped to great lengths with Fiachra achieving a personal best of 3.28m to compliment Evan who also hit at PB with 3.33m. Their combined scores won them silver!

Strong running was also the order of the day and in the 300m our boys Daniel Galvin and Evan Hallinan fought a good fight to keep in the race, well done boys … combined time of 1.55.91 is something to be proud of especially in All Irelands.

As if our pulses weren’t already racing, we still had the heart stopping 4×100 relays to come…. First up were our girls, made up of Erin Kelly, Josie Fallon, Sarah Byrne, Hannah Jennings and sub Jade Moorhead. Relieved to know it was a straight final, the girls put their best foot forward and as in relays their best hand back! From the off the race was on and the girls did everything and more to bring home the bronze in a time of 71.38. Having had just watched the girls, we worried that our hearts couldn’t take much more excitement with the boys relay. 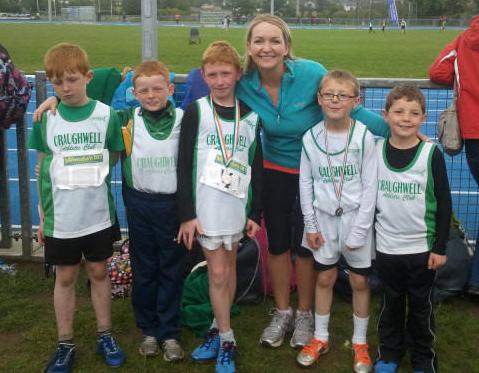 The team was made up of Daniel Galvin, Luke Flynn, Fiachra Bond, Evan Hallinan and sub Kenneth O’Connor. Lined up and ready to rock, that’s exactly what our talented boys did, leading all the way with fantastic running. It was a hard run home to the finish as our competitors put the pressure on with their strongest runners. It just got away from us at the finish but gaining 4th in All Ireland was again an achievement at this young 7/8 years of age.

I know myself and all the coaches were so proud of the kids and hope that their experience of their first All Ireland whets their appetite for a future in athletics. I had a blast as did all of the coaches and by the end of the day we felt like we had run a marathon! Keep up the good work, see you all in September.

The Under 10 Group finished a fantastic year with 13 athletes making the long journey to Donegal. This was 4 more than last year in Cork. This time, both Boys and Girls Relay teams made it to the All-Irelands, and both delivered on the day, the girls reaching the final for the second successive year, while the boys improved on their Connacht time by a huge 3 seconds to narrowly miss out on a medal in 4th, having won their heat with a scintillating performance in 1:02.7.

For the girls, Rebekah Flynn (running superbly despite an ankle injury sustained earlier) and fellow multi-event qualifier, Emily Miskella were ably assisted by Saoirse Dooley and Rebecca Lynch. Their sub, Alex Slamas had played a huge part in getting the team to this day, as did Kieran O’Connor for the boys.
Robert Urquhart led the boys team out strongly, with Connacht 60m heat winner, Conor Hoade and Lukas Schukat delivering star turns to put finisher Liam Mulveen right in the mix. Liam held his own with Ireland’s top sprinters in the last leg to narrowly miss out on bronze in a time of 62.07 but there will be real optimism that this team has a very bright future. 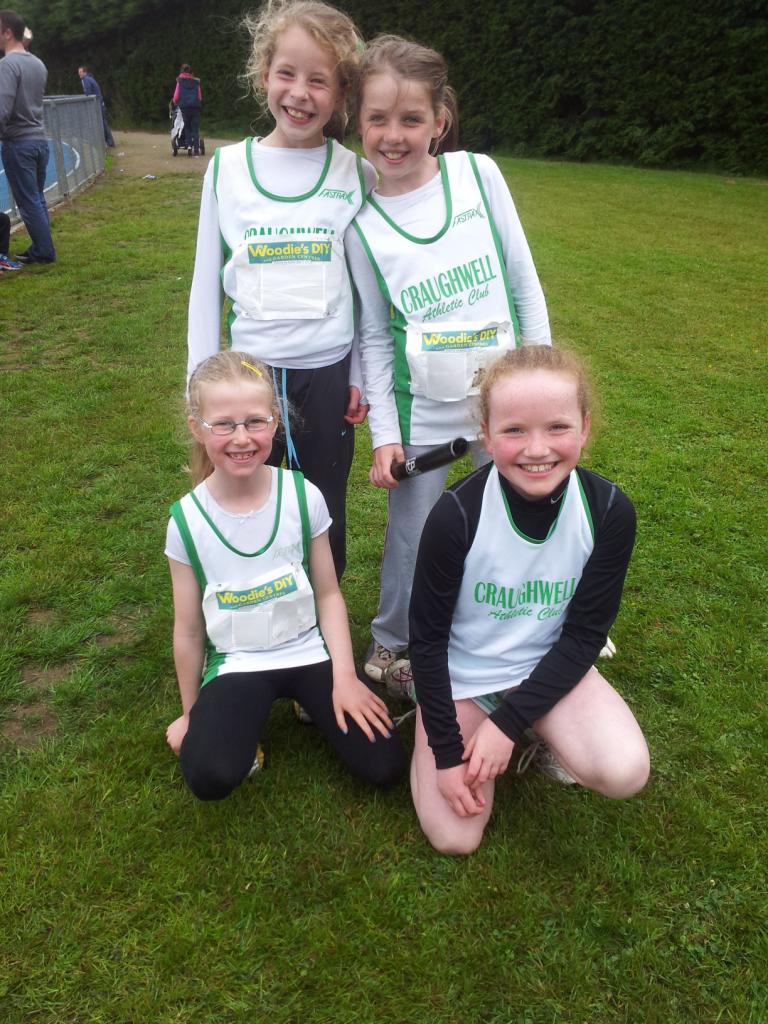 Earlier in the day we saw 4 of our turbo javelin throwers excel to finish 4th and 10th. Oisin Keane can be proud of being Ireland’s 3rd best thrower, with a 19.95m effort, while Liam McDonagh, Robert Urquhart and Michael Trehy were right behind him, some more than doubling their distances in the past month. Great credit for these amazing performances is due to parents of all these throwers who took great interest in the event – at home, at training and in Dangan.

6 of our under 10 Long Jumpers qualified from Connacht, and despite ferocious competition, they held their own with Ireland’s best. Connacht champions Kieran O’Connor and Liam Mulveen were an impressive 6th with 3.22 and 3.38 jumps into a strong wind. Lukas Schukat and Robert Urquhart had leaps of 3.28 and 3.03 to finish in 10th overall.

A year ago, Rebekah Flynn & Emily Miskella were medalists in the girls’ Long Jump, but this time the competition was just a step too far and the girls placed 10th with a combined total of 6.22m. But the girls can point to breathtaking 3.47m and 3.29m leaps respectively to take the Galway title last month. They can also point to a strong 5th place finish in the grueling 500m, with both running tactically assured races to record fine times of 1:39.48 and 1.43.24. These girls are clearly potential long distance medalists for next year.

Thus, the Under 10s season finished with a great sense of optimism and enormous satisfaction for all involved.

The U11 girls were in hard luck in their events with Ava Finn and Aíne Kelly taking 4th place in the long jump. Both girls had big jumps with Ava leaping 3.47 and Aíne 3.42 to record a combined total of 6.89. When the scores were crunched, the girls missed out on the bronze medal by an agonising one centimetre. Ava’s third jump and Aíne first were from behind the board where they recorded 3.36 and 3.35 – a little closer to the board would have carried them to a medal! The 2 girls combined with Kate Reilly, Aoife Kelly and Emma Jane Moran to record the 3rd fastest time of the day in their relay heat in a time of 61.82 and just miss out on medals when placing 5th in the final in a time of 62.13. In the 60m pairs, Aoife Kelly and Emma Malone put in a strong performance to take 6th place in times of 9.74 and 10.16.

The U11 boys relay team ran well in their heat but just missed out on making it to the final (Conall Doyle, Shaun Gilligan, Padraig Martyn, Lewis Ryan, sub Conor Trehy) – an unfortunate ankle injury to Conall earlier in the day coming against him on the final leg of the relay. In the paired events, Padraig Martyn and Conall Doyle placed 12th in the 60m sprint in times of 10.04 and 9.86 and 7th in the long jump with a combined 7.06m with Padraig unlucky to break 2 of his jumps. Conor Trehy and Liam Diviney threw a combined 27.25 in the turbo javelin.

Some interesting footnotes on the performances:-