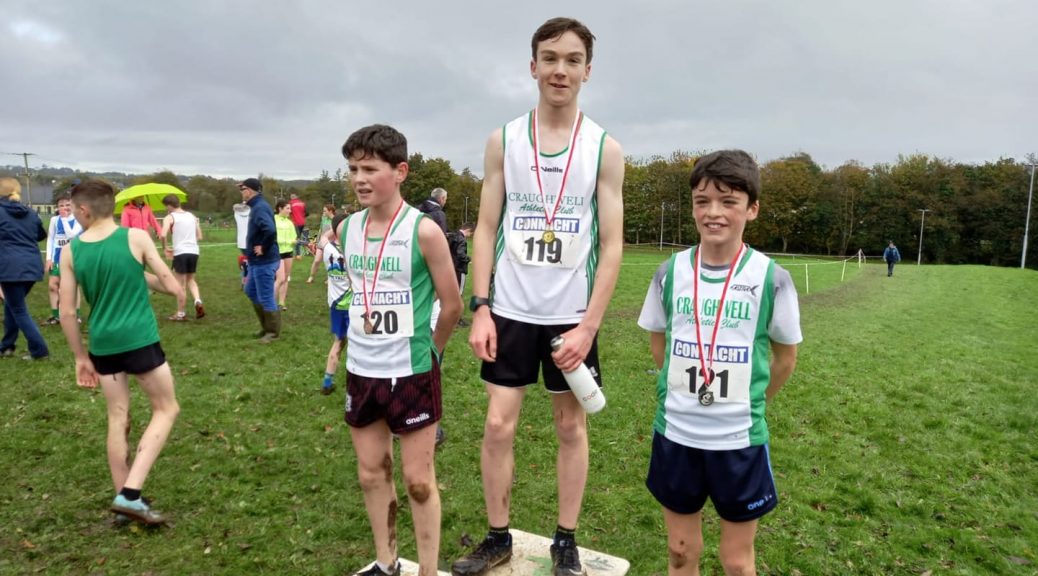 On a wet and windy Halloween, there was plenty to be scared of at the Connacht Even Ages Cross Country! Belleek is one of the most fabulous facilities that any club in Ireland has at its disposal, but when it is tough it can be very tough and today was one of those days! The course was wet to start out with and by the end of a day of persistent showers, it was quite the challenge getting up that famous hill! Despite the weather and challenging conditions, there were some exceptional performances from Craughwell AC Athletes on Sunday and much fun was had.

Alan Hallinan has already had a superb Cross Country season and really got things going with a hard fought victory in the u12 boys race.  His teammates of Oisín O’Donovan (12th), Alan Warde (16th) and David Frazer (19th) did enough to secure team Silver. David twisted his ankle during the run and dug deep to produce a fantastic finish.

In the u12 Girls race, Aisling Lavan had a super run to finish in 19th place out of the large field. This was an outstanding run from Aisling, our sole competitor from u12-u14 in the girls!

The u14 boys race was the club performance of the day as Craughwell swept all the medals.  Declan O’Connell drove home over 100m clear to a commanding victory, followed by his teammate Stevie Joyce in Silver and Stephen Ruane in Bronze.  Keelan Moorhead finished a fine 16th to seal the Gold for the team.  The finish is captured below – it sounds to me like inspirational coach Ronnie might need some cardio tips from the four lads!

Fantastic running from all four lads – we will need to look back in the record books to see when or if we last swept the medals for u14 at Connacht level (Update: Mike did the research – this appears to be just the second time we ever did a clean sweep, the last being the u16 in 2018 where Sean Cotter, Ross McGuinness and Oisín Davis were top 3).

In the U16 Girls race, Holly O’Boyle finished 24th, just a couple of weeks after breaking her shoulder.  Anna Cotter had another strong run to finish 5th in the u17 race.

Ross McGuinness won a fine Bronze in the U18 Boys race in a tough contest. Ross had been focusing on his triathlons recently and is just getting back to the running-specific training, so this was a very strong opening race for him.

Well done all – on to Bushfield, Loughrea next week for the Uneven ages!