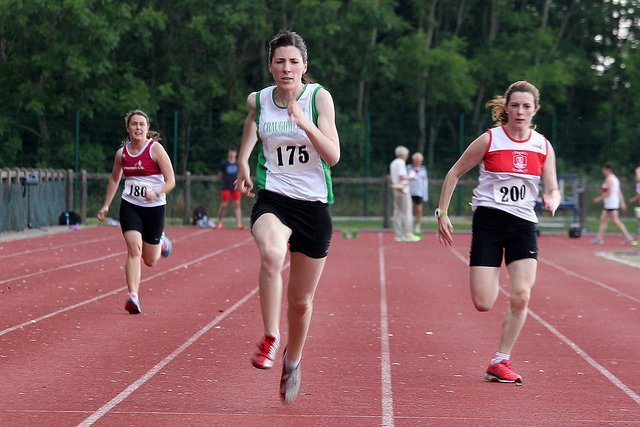 In good conditions for fast times on Dangan on Monday night, there were several excellent performance from Craughwell AC Athletes.   The worst of the overbearing heat has left us (are we really complaining about heat?) and the air was still, with the traditional Dangan finishing gale noticeable by its absence.

Seamus Lynch is a welcome addition to the Senior team as he continues to compete in the Jumps and Sprints – winning bronze in the M35 100m in a fine time of 13.73.  Seamus also topped this up with Silver in the long jump with a leap of 4.28m. Unfortunately Seamus picked up a niggle in his last jump, but hopefully he’ll be right by next year’s national league!

For me, the highlight of the night was probably the men’s 10,000m.  Ollie Mullins, originally a native of Clarinbridge joined the club earlier this year and is a much needed boost to the Senior men’s team.  Ollie is from a Soccer background, and his natural ability has been immediately obvious in training. On Monday he was running his first ever 10k race of any sort – and stepping onto a competitive track for the first time.  Ollie ran an exceptional race starting out in 5th place and then moving up to chase a breakaway group of 3 as the 25 laps progressed.  At about 4k he moved into the lead and started to push harder, building a gap on his opponents.  Cheered on by his family he ran a perfectly paced race, passing through 5k in 18:04 and running the second half two seconds faster to finish a popular winner in a time of 36:06 – over a minute ahead of his nearest rival in the end.  Is it the best debut race ever from a Craughwell AC member?  I can’t think of a better one!  Brilliant stuff and there’s much more to come if he can keep healthy.

Thomas Porter won the m50 race in 43:43, the evergreen warrior leaving plenty of younger people in his wake as usual.

Michael Walsh got great value for his five euro entry fee, competing in every possible event, even though his training has been very broken recently and he was carrying a niggle.