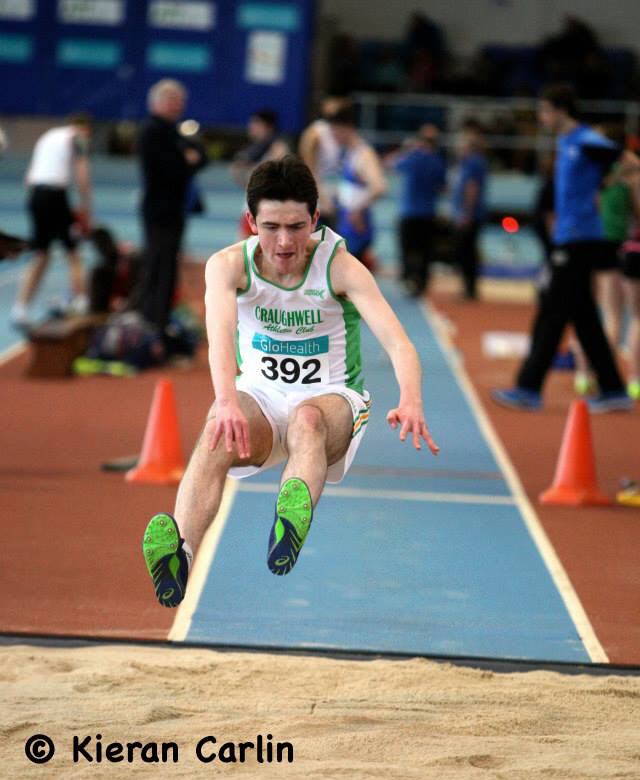 The club’s leading juveniles had another wonderful day of action on the final day of the National Indoor Track & Field championships in Athlone last weekend, with some fantastic performances which yielded 1 gold, 2 silver, 2 bronze and several top eight finishes. Foremost amongst them was Sineád Treacy’s massive leap of 5.45m to take the gold medal in the U19 long jump along with a season’s best of 25.04 to take the silver medal in a close battle to the line in the 200m. This brings Sineád’s tally for the National indoor season to 2 individual gold and 1 silver in the U19 championships, silver in the U20 200m and team silver in the National Indoor League – incredible performances.

Also in fine form, Matthew McKernan leaped an impressive 12.17m to take the silver medal in the U18 triple jump. Daniel Callanan-Forde claimed his first indoor National medal and first long jump National medal with a fine jump of 5.70m. Daniel was holding 2nd place until the very last round of jumps with a best of 5.68m when the jumper prior to him leapt 5.77m. On his final jump, Daniel put everything into it to leap 5.70m and had to settle for bronze by the tiny margin of 7cm.

Jack Farrell raced to a time of 10.49 to automatically qualify for the finals of the 60m hurdles, with Jack Fitzgerald placing 4th in the same heat in 11.08 – just missing out on qualification for the finals. Jack went on to record a brilliant 4th place in the final in a time of 10.35 – a massive achievement for Jack and great encouragement for the future. Leanagh Gilligan had a super series of jumps in the U14 long jump with a string of PBs including her best of 4.68m which placed her 6th overall. Eva Kelly placed 8th in the U14 shot putt with an impressive throw of 9.36m, a big PB for Eva.

Conor Duggan placed 2nd in the U19 200m heats to qualify for the final in a new PB time of 22.61 and went on to place 5th in the final in a time of 22.78. Ultan Sheerin placed 8th in the U15 long jump in a fine series of jumps which resulted in a best of 4.78m. Alan Harrington threw a big PB of 8.17m to take 9th place in the U16 shot putt finals, great experience on his first time in the National finals. Michelle Duggan raced to a PB of 26.52 to take 3rd place in the U17 200m and narrowly miss out on making the final.