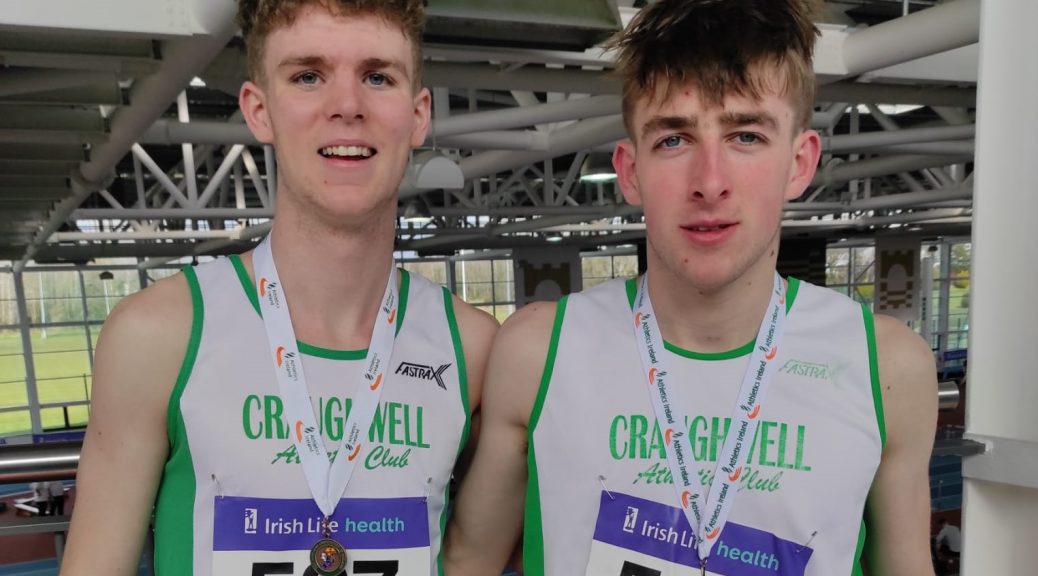 The National Junior and U23 is one of the last Indoor events of the year and Craughwell fielded a large group of competitors across the disciplines with no less than 11 athletes competing across 15 events, showing the strength of the club of late in these age groups as they won an exception SEVEN National medals. Highlight performances had to be Patrick Noonan’s famous win and Evan Hallinan’s outstanding triple medal winning performance.

One of the highlights of a crazy day was an exceptional performance of the popular Patrick Noonan in the U23 1500m to win his first National Title! Patrick showed he meant business by trimming his pandemic mullet for the occasion, and set out with a calm and conservative start – he was in 8th place after the first lap, and only as he neared the 3rd lap did he progress his position to 6th, then 4th. The pre-race plan was to try to get to 4th and settle until 1100m in that position, and make a move from there.

He tracked fellow NUIG man Aaron Brennan for a lap and a half and made his move a little after the allotted spot. The growing gap to the leading pair ahead seemed to rapidly shrink then as they hit back-markers and Patrick quickly overtook 2nd and then took the lead at the bell, looking super strong. The result was in no doubt from there on and Aaron followed his slipstream all the way to score a 1-2 for Galway. They are both total gents and everyone delighted for them!

Watch the race in the video linked above – it is a brilliant watch, made all the better by his excited supporter on the audio (it sounds to me like his proud mum Helen, or perhaps.. his former teacher South Galway’s Siobhan Kelleher, but I didn’t check with them!!). The time didn’t matter but it was a personal best of 4.01.

Seán Cotter ran the Junior 1500m race. Seán had an absolutely superb run last week in the varsity Cross Country so had every reason to be optimistic. The race started out slow in 69/70ss but was a little messy with traffic and contact. The race relentlessly continued to build up in pace in a very surgy-manner. Sean settled in 4th tracking Eurocross competitor Cathal O’Reilly – a move from 600m-800m opened a gap of a meter or so, Seán battled back and passed O’Reilly at 1000m. Just as he caught up, another injection of pace arrived however and he was re-passed again. Though Sean gamely hung onto the back of the leading 3, by the time the bell came he knew he was cooked so he just saw it out. He finished in 4.08.71, well outside of his personal best but he wouldn’t be worried about that – his target was a medal and he gave it everything he had on the day.

Kyle Moorhead has been a nearly man on multiple occasions. His close 4th place finish in the National Juniors in 2020 behind Michael Morgan was probably the most memorable but there have been several other times that he seemed sure to add to his Tailtean’s Steeplechase medal but didn’t quite. That run was ended today with a fine bronze in the 800m. Kyle knew at the startline who he needed to track. He tucked in behind the two target men and as the pace wound up, the race spread out but Kyle’s medal was never in doubt.

The women’s 800m was never Emily’s target but she ran it to get a blow out and do some speed in advance of her own age competition next week. Emily’s race was very hot at the front and the field soon split into two. Emily raced well with the second group to record a solid 2.28.

Also on the track, Arlene Earls continued edging down her indoor 400m time – having run 63.31 at the recent Connacht Indoors, Arlene ran a blistering 62.68 in the heats of the U23 Women’s 400m and only just missed out on a place in the final.

The jumps saw an incredible haul of 5 medals winging their way to the club.

Jade Moorhead was also in super form in the U20 Women’s High Jump with first-time clearances of 1.50, 1.55 and then 1.60m to move into 3rd place overall. Jade made 3 great attempts at 1.65m, well over it on 2 of her attempts but just clipping it with her heels. Jade’s 1.60m took the bronze medal on countback – a fantastic achievement to add a National U20 Irish medal to the National U20 Scottish title she won a couple of weeks back.

Star of the jumps today however had to be Evan Hallinan with the unique achievement of winning 3 National individual medals on the same day. His first event was the U20 Men’s Triple Jump at 10am where he took the bronze medal with a best of 13.02m. In 4th place going into the final round and with the pressure on, Evan put in a huge effort to leap to the bronze medal by the tiny margin of 3cm – a fantastic performance under pressure. And literally only 10 minutes after the end of the triple jump, Evan was back in action in the U20 Men’s High Jump where he leaped an impressive 1.90m to tie for first place and having to settle for the silver medal on countback. Lukas Schukat was unlucky in the same event to exit at 1.90m and take 4th place – another day would also have seen Lukas in the medals.

And less than 2 hours after the high jump, Evan lined up for his final event of the day with the U20 Men’s Long Jump and another top-drawer performance with 4 leaps over the 6m mark and a best of 6.47m on his 5th jump to take the silver medal against stiff competition – only 7cm behind the gold medalist and tying with the bronze medalist on 6.47 but claiming silver with his 2nd best jump of 4.36m. A great day for the 2021 Connacht Jumper of the Year!